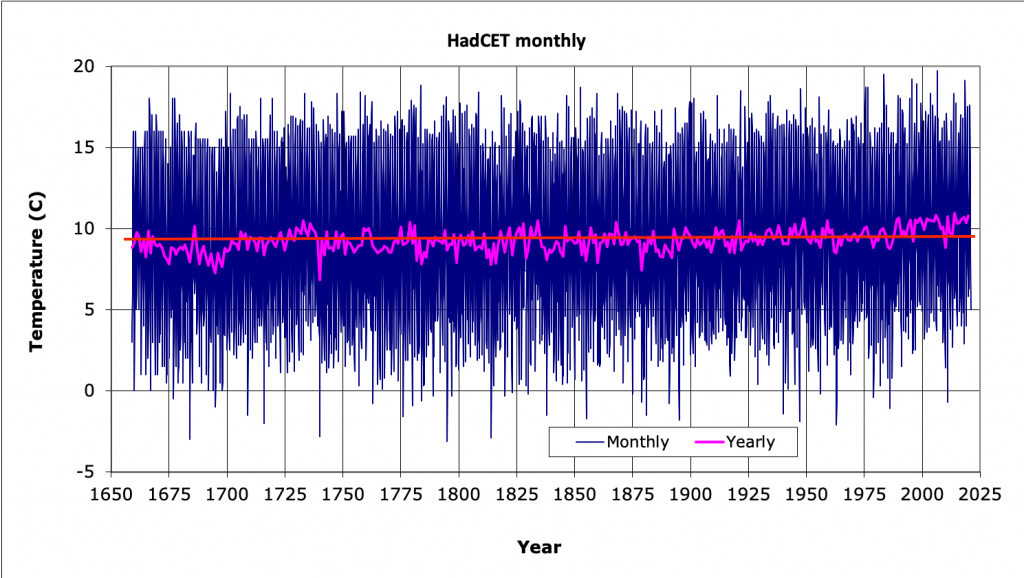 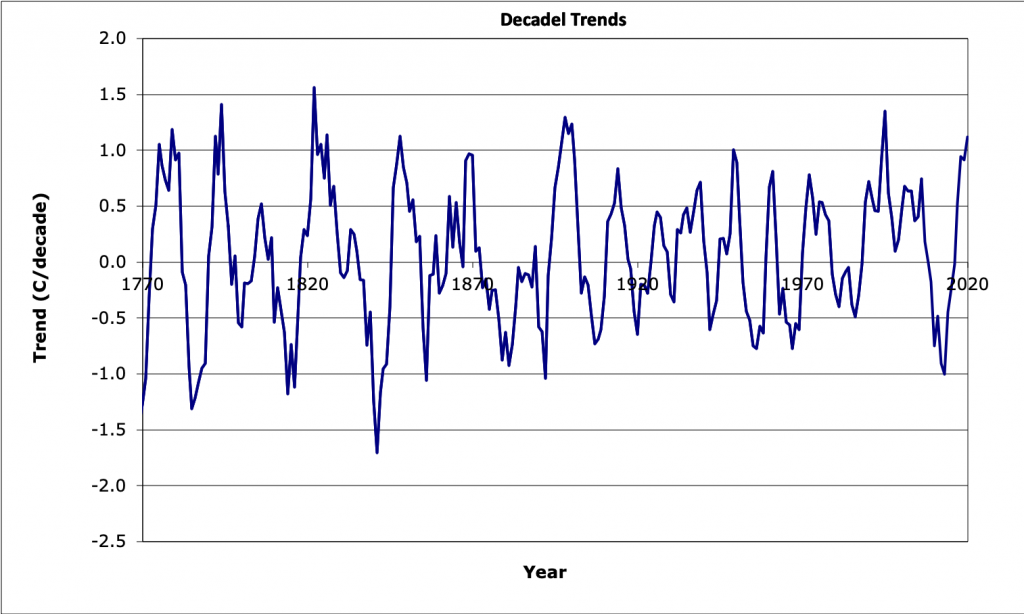 The average temperature was 0.81 C in September. This was up a little from August (0.76C). However 2021 is turning out to cooler than recent years with an average annual temperature with 3 months remaining of 0.69C. This makes it on track to be the coolest year since 2014. 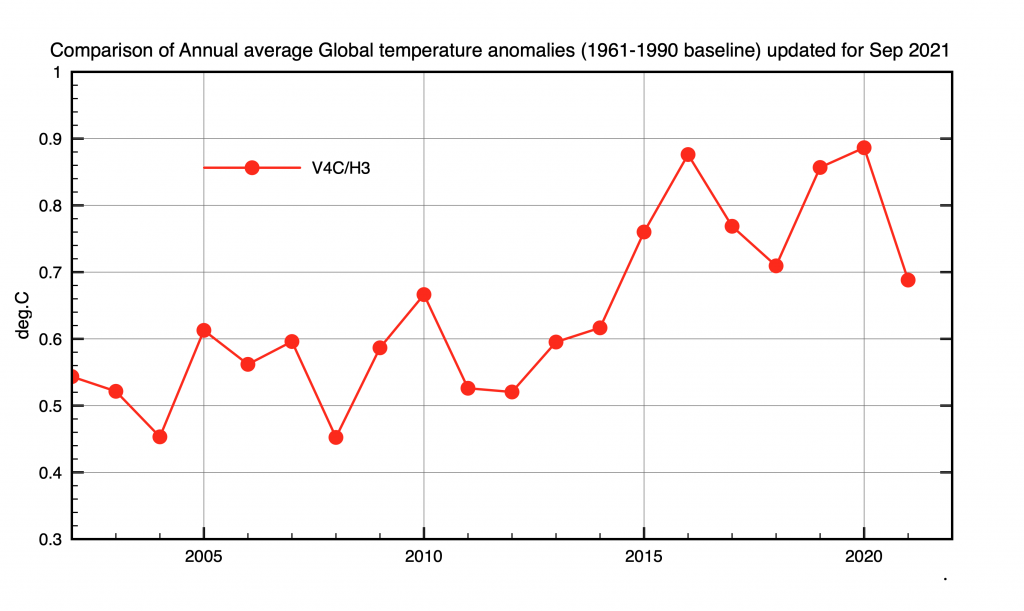 The monthly data show the effects of the 2021 La Nina. 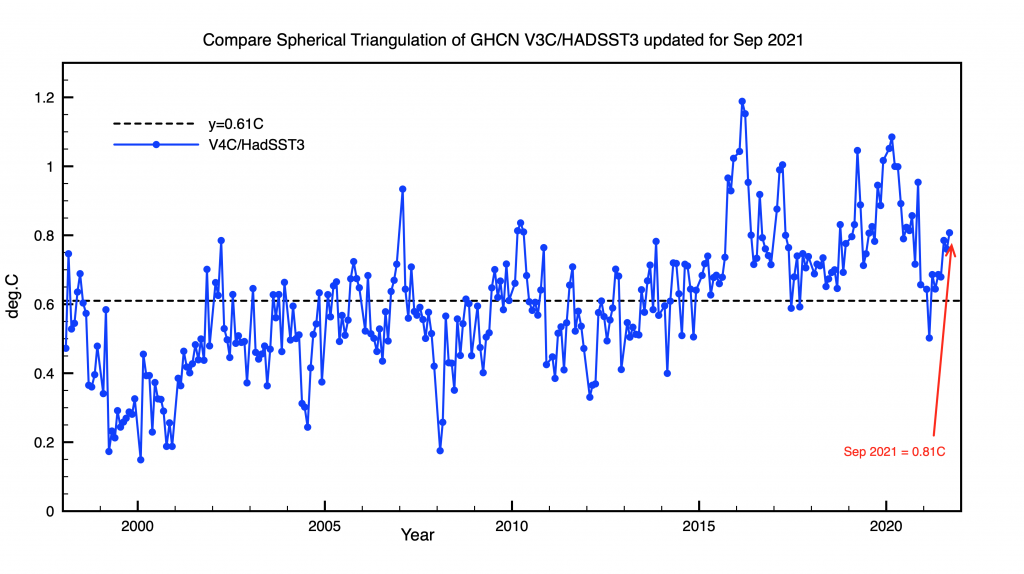 This strong La Nina is evident in the latest SST data. 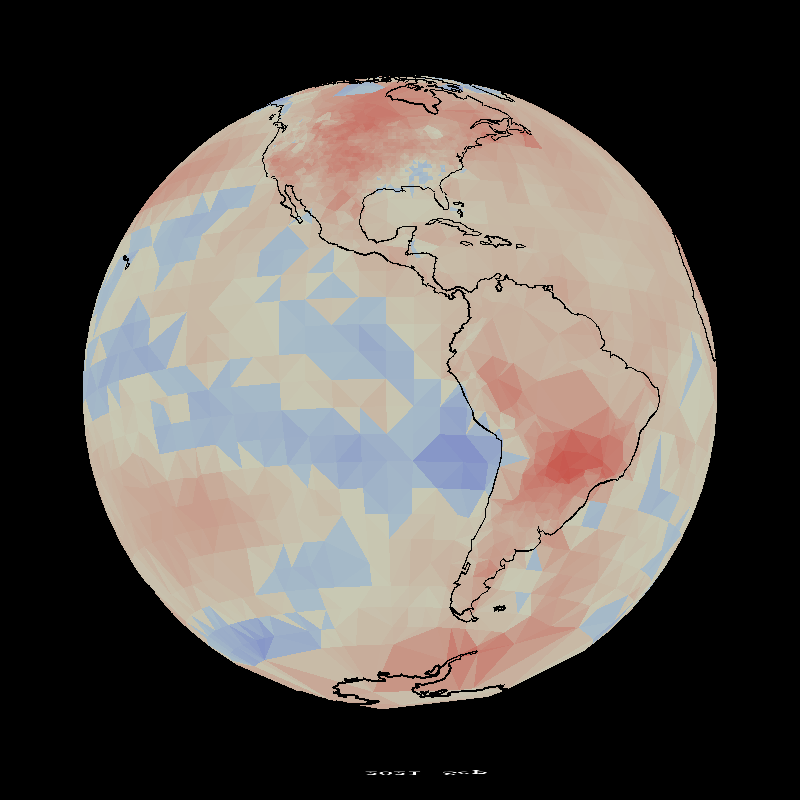 Over land areas cold spots in Siberia, Greenland and Alaska/Kamchatka are evident. 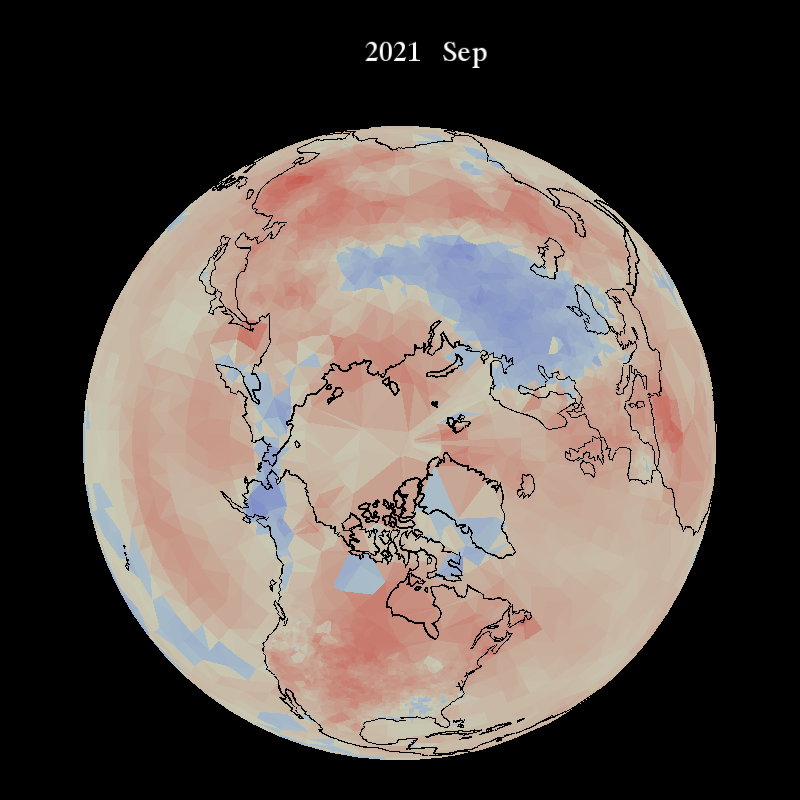 With just 3 months to go and a continuing la Nina,  it looks almost certain that 2021 will either be the coldest or the next coldest of the last 7 years.

On 30th August I tested positive for COVID. I had a runny nose plus slight cough for a couple of days and generally felt tired. My wife Anna had already experienced similar symptoms 10 days earlier (hence our box of antigen tests) but had always tested negative. As a result we booked our NHS PCR tests the next day (Monday) and sure enough mine came back positive on Tuesday, but hers not. Track and Trace contacted me and I agreed to self isolate for 7 days (10 days since first symptoms appeared). This was not such a big deal as I have a garden and perhaps illogically my wife was free to do the shopping. By day 5 though I felt fine and tested negative on a consequent Antigen test. I am sure the real reason I had mild symptoms is because I had been already double vaccinated (AstraZeneca) at the end of April. 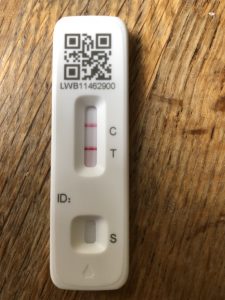 Before all this we had already booked Ryanair flights back to Italy on 10 Sep initially for a 2 week stay, but with the idea to stay an extra week because then we would be able to fly to Hong Kong and visit my son and family who we haven’t seen for nearly two years. This is because Italy is a medium risk country whereas UK is a high risk country. Only Hong Kong residents can fly from high risk countries, whereas anyone can enter from medium risk countries subject to restrictions and at least a 22 stay in that country. To travel to Italy we first took a Boots antigen test the day before and luckily these came back negative so we were good to fly.

Italy is my favourite country partly because I lived there for 22 years. The food is the best in the world and the weather is normally perfect. So spending 3 weeks in Liguria is a pleasure. The only doubt was how to get from there to Hong Kong. Cathay Pacific no longer fly direct from Milan so the only realistic solution was Lufthansa via Frankfurt, because a transfer via a high risk country (e.g. London) invalidates your entry to Hong Kong!

Sunday 3/10: Milan Malpensa – Frankfurt delayed 1 hour leaving 20 mins to meet the connection to Hong Kong. Brexit forced us to go through manual passport control first as we are leaving the EU. Then a 1 km run to get to the last gate in the airport. Huge relief that all PCR tests, vaccination certificates, Hong Kong Health declaration were in order. As we eventually board there are still a couple of people who got caught not having made the HK health declaration and are frantically entering it on their phones. Hopefully they too all made it on board.

Monday: We finally arrive in Hong Kong at 3.30pm . Then we are directed to a huge holding area for incoming persons where all the documents are again rechecked and we are each given a number. We are then directed into a large terminal area for yet another full PCR test, where an army of protective suited medical staff in multiple cubicles are lined up to swab each of us and then hand us a ticket confirming our test ID to hang round our necks. More long walks to yet another terminal area with hundreds of desks spaced one metre apart each with a code matching our test IDs. We then wait another 3 hours for the negative results to arrive and we are each given new freedom sheets so that we can finally leave. After double checks and finally passport checks  we are then able to pass through to a baggage collection area. Then eventually we get into another queuing system based on quarantine hotel name. Only a 20 minute wait till we finally get outside to get on a bus with one passenger on each 2 seat bench – ( 1 meter rule). The driver and assistant are dressed in full bio hazard suits. After traffic delays from an accident we finally arrive at our hotel 6 hours after landing in Hong Kong. We reach our fairly spacious hotel room where we must now spend the next 2 weeks.

Day 6 Saturday: We now have a kind of routine in place to keep sane. After breakfast spend 30 mins on a treadmill we managed to rent, then read newspapers on-line and afterwards the books we brought with us. Then coffee at 11am and lunch arrives at 1:30 pm. In the afternoon more exercise/stretching, dinner arrives around  8pm – now we can have some wine & beer ! Our food is good and all delivered in disposable cartons and left outside the room. It seems like a waste as we then throw it all away afterwards, but the objective is to avoid any possible contamination from our room escaping. We wait a couple of  minutes to retrieve meals  because we must avoid seeing anyone, and especially never leave the room itself. If you are caught more than ~1 metre from the door you risk being fined and taken into  government quarantine. That certainly would not be pleasant.

Yesterday we had PCR tests by the Hong Kong Health Authority in the entrance to our room. It was all very efficient. We put a chair and a bin in the entrance. They rang the bell dressed in protective gear, checked our passport numbers, swabbed us, and then disposed of their gloves in our bin. Again the logic is to keep any contamination always inside our room.  We now have only just over 1 week to go and 2 more PCR tests before we are free to leave !

Update 18th Oct : We are out of quarantine !