I just watched the Freddie Sayers UNHERD interview with Prof. Jay Bhattacharya from Stanford. The Great Barrington Declaration, also signed by Prof. Gupta from Oxford, proposed an alternative  policy to lockdowns while protecting the vulnerable. This was almost immediately ridiculed by mainstream epidemiologists and especially SAGE scientists as being dangerous nonsense. The signatories consequentially suffered professional damage as a result.  Today though as we learn that vaccines cannot fully stop the spread of COVID, so their approach begins to look more reasonable because we will most likely have to learn to live with COVID becoming an endemic disease. All the  various lockdowns, consequent economic carnage, and related non-COVID health damage (cancer, mental health etc.)  may turn out to have just been delaying the inevitable. The Barrington signatories were pilloried and ostracised by their peers at the time, so too was Anders Tegnell in Sweden. However they may well yet prove to have been right all along.

The conclusion I found most interesting in this interview was the proposal that scientific advice can simply depend on your politics rather than the “science”.  Since most academic scientists are inherently left wing so they tend to support top down social justice interventions. The consensus opinion against the Barrington scientists may simply have been because they were viewed as being too libertarian by opposing their government advice to impose NPIs.  Similarly they rubbished Tegel’s policy in Sweden for the same  reason. The left tend to be far more likely to support imposing widespread controls on social “justice”  whereas the right are more likely to oppose big government control over private lives. This advice for authoritarian control of society has then been  accentuated by the fear of COVID whipped up by the press. People become willing  to accept such draconian limitations on their freedom once they believe that otherwise their lives will put in imminent  danger.

There is almost an exact analogy here with the situation in Climate Science. The climate “experts” also tend to come from left leaning science academia and likewise they too are proposing stringent top down controls on society and our private lives in order to save the planet from climate change. The emergence of an explicitly left political protest group XR, hell bent on imposing a technological “lockdown” by force is no surprise since it has the implicit support of most climate scientists. The temperature data indeed seem to get more alarming and the language ever more strident. The difference though is that “dangerous” climate change, if it can even be defined,  is still projected to occur many decades into the future when most of us will be dead anyway. The other point that is completely overlooked is exactly how the whole world can realistically cut all CO2 emissions and who will police it. If it  was easy and cheap then it would already have happened.

So just how political has climate science become? Can we really trust the existing temperature data and its  projected rise into the future by ever more sensitive models? What would a 3C warmer world actually look like and why can’t we simply adapt to it?  How possibly could the world achieve Net Zero ? Who should act first? How much would it cost  and how would you then do you police other countries emissions ? These are all questions studiously avoided by climate scientists. It is someone else’s problem, not theirs.

AR5 was a good report but it had one flaw which many climate scientists hated. It showed a temperature “hiatus” – or essentially no warming at all between 1998 and 2012

Since then a huge effort has gone into expanding the station data, “homogenising” (adjusting nearby data station data) and extrapolating the results into sparsely populated regions especially the Arctic ( I have been doing the same !). This has resulted in vanishing the famous AR5 hiatus. A steady increase in temperatures is now the consensus, although even then the  trend still lies in the lower half of model projections (low sensitivity)

However some of the updates for example those in HadCRUT4 show that the underlying temperature data have been altered. The figure below shows a comparison of the final HadCRUT3 dataset and the latest HadCRUT4 series both calculated using just the  HADCRUT3 only station numbers.

This change enabled 2010 to just exceed the 1998 temperature breaking the Hiatus, although I discovered that they also relocated some stations using the same station number. 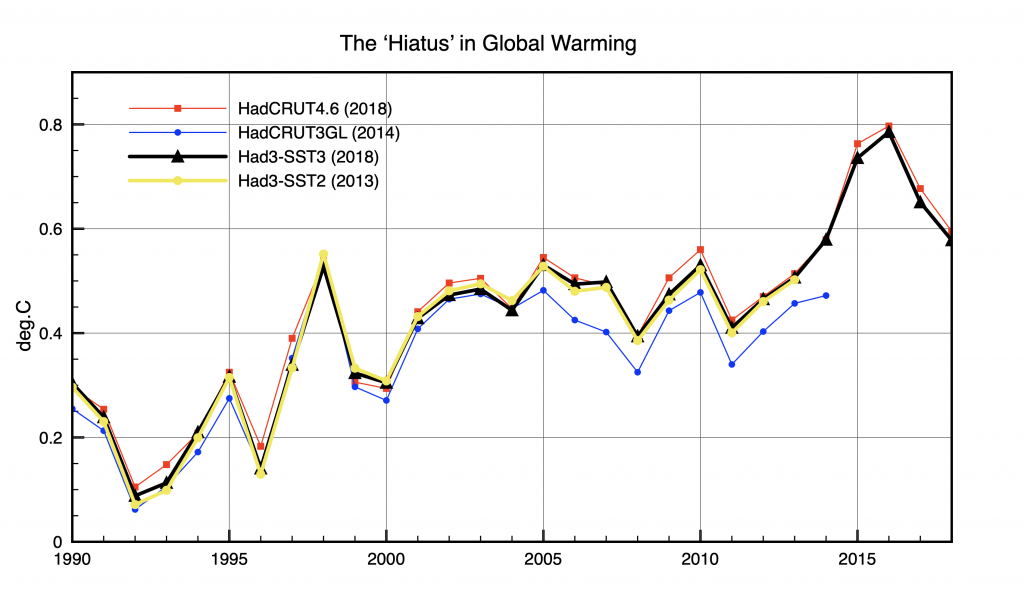 AR6 WG1 “summary for policymakers” is now available and he language is more strident and the graphics more slick. Humans have caused a net warming of about 1.1C since pre-industrial times. 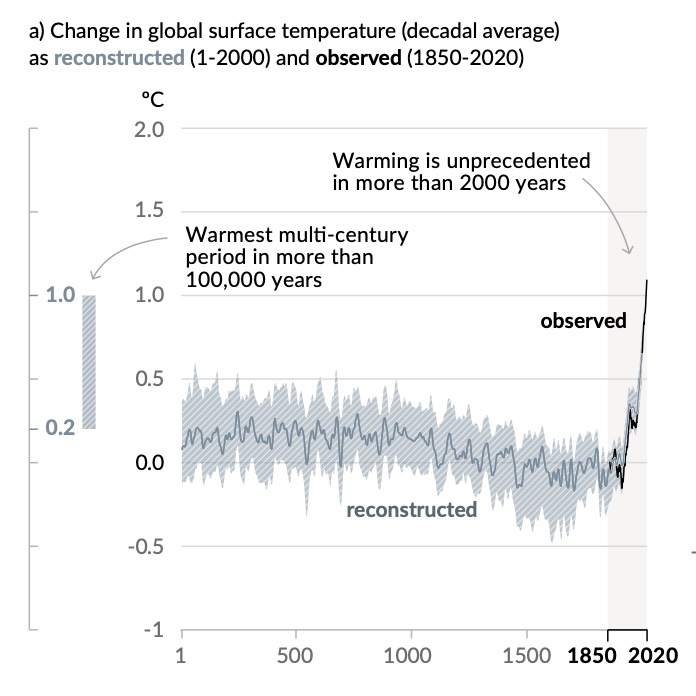 So the earth has been warmer than now 125,000 years ago and far colder 24,000 year ago. Most human development has occurred during the holocene interglacial. Industrialisation since 1800 has improved the life of  billions of people, but the price to be paid for this is an unforeseen rise in CO2 levels leading to a ~1C rise in average annual temperatures. This rise will continue until CO2 levels stabilise. However the idea that you can blame an oil company for localised flooding or forest fires though is daft nonsense. The impact of an ever increasing population and the loss of natural environments are probably just as important.

Everyone agrees that we must eventually stop burning fossil fuels to avoid excessive temperatures in the next 80 years. The question is how to achieve that goal without destroying the wellbeing of everyone. For some reason political pressure groups push governments to deploy “renewable energy” and close all fossil fuel power plants. The trouble is none of them do the sums. David Mackay did them for us but most activists have conveniently forgotten his results.

If we electrify road transport & heating we will need more than twice the current peak power delivery. That roughly translates to 90GW power delivery for the UK at 6pm.  Quite often all UK Wind turbines combined produce <1GW for 24h. Sometimes they produce quite a lot (up to 18GW) and sometimes they produce nothing at all. A modern society cannot function with blackouts so renewable energy should never form the core of any electricity supply system. That has to be nuclear energy. Nothing else works and we have to stop listening to Greenpeace and XR nonsense.

Another fact that is conveniently ignored: A world based on renewable energy must also generate enough energy to renew itself – mine & refine copper, steel, rare earths, aluminium, fibreglass etc. Then transport them all to site, demolish the old plant, clear the site and erect the new plant, all without using any diesel.

So beware of simplistic solutions based on political ideology which simply don’t work.

25 Responses to Bias in Science