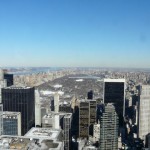 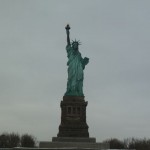 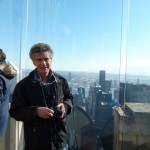 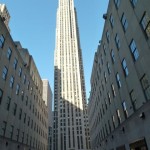 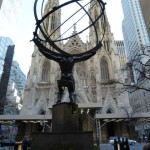 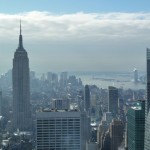 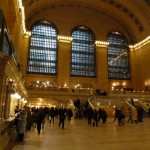 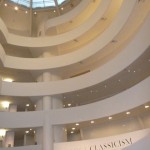 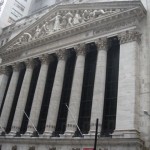 We arrived in New York last Sunday 16th January in sub zero temperatures but clear sunny weather. I am taken aback each time at the scale of the city, the friendliness of the city and the service. It is a great place. New York is one of those cities where you can always discover something new. This time we went to the  Rockefeller centre and took the tour. This landmark set of buildings were built in the 30’s and the history of the design and art work is that of a struggle between Nelson Rockefeller Jnr who was a conservative baptist and his art loving wife. Luckily for us his wife usually won out and the internal design and details are stunning. It seems incredible that the main 60 storey tower was built in just 3 years. We took the tour which was run by an ex-history teacher and was really fascinating. That building, and the Chrysler tower are classic art decor design buildings which will still look great in another 100 years time. From the top you get some stunning views of New York. It also brings home  the terrible loss of the WTC twin towers from the skyline which were also architectural masterpieces and so iconic.

There are two art galleries which should not be missed: The museum of modern art and the Guggenheim gallery. Both have some of the world’s best collections of 19th and 20th century art. The MOMA was full on Monday (a holiday) also with lots of children. I was amazed at how close you could get to priceless works by Van Goph, Monet etc. There is a stunning painting by Van Gogh there  of Olive Trees with a swirling sky . I saw a young boy go up and touch the canvas ! seemed to be fine. Then I heard the woman giving out tickets tell one little boy – “Don’t write on the walls – but if you do you have to sign it !” I thought how nice can you get – because it is clear that they don’t seem to have any problems and letting people get close to art is a great thing. The Guggenheim museum is marked by the amazing architecture as much as the paintings inside. When we visited only two floors were open but even so there were some wonderful paintings by Pisaro, Renoir, Manet, Cezanne, Kadinsky…

Yesterday went to  Wall street,  the WTC site and then took the ferry to Ellis Island. The weather was appalling with wind and horizontal rain. It was so bad that it destroyed the $5 umbrella we bought in the morning. Still it was an interesting trip to see the conditions that greeted emigrants in the late 19th century early 20th century. America really is a melting pot of nationalities which then were mainly coming from Western Europe at first but  later on Southern and Eastern Europe. Within a generation people mostly became simply American which is a tribute to the American spirit.

Last night we went to  the Million Dollar Quartet which is a musical based on an incident when Elvis Presley, Johnny Cash, Jerry Lee Lewis and Carl Perkins all met for a session at Star Records in the late 50s. Of course there was little plot to the show but some great playing as we went through a series of Rock and Roll hits. A really nice evening and some really good beer at the Heartland Brewery beforehand.

This afternoon we are leaving for Las Vegas. I have never been before so I have no idea what to expect !

This entry was posted in America, Travel and tagged US. Bookmark the permalink.