There are many physical processes which can change  the Earth’s Climate. Some  of these processes are not widely known. So while political pressure builds to cut CO2 emissions as being the assumed cause of recent, though relatively small, temperature rises it is worth summarising a few  of them.

1) Changes in intensity of the Sun’s energy flux to Earth. This mainly happens due  to  astronomical effects on slow timescales. The eccentricity (elipse) of the Earth’s orbit round the sun varies over time  effecting how much solar energy is incident in the northern and southern hemisphere’s in summer months. In addition, the wabble of the axis of the earth’s rotation causes  the angle of incidence of solar energy in the Northern Hemisphere to vary. These cycles occur on a period of 100,000 years and 20,000 years. They are thought to be  the probable causes of Ice Ages, although the details are still not fully understood. During an Ice Age the oceans absorb vast amounts of CO2 from the atmosphere because cold water dissolves more CO2 than warm water. During the inter-glacial periods as the Earth warms up so CO2 is emitted back into the atmosphere just ike warm Coca Cola loses its fiz. Thus CO2 levels are more likely an effect of the Ice ages and certainly not the cause, although some people argue that indirectly the increasing greenhouse effect helped the Earth to warm out of the ice age. Note however that there is no “tipping point” or run away greenhouse effect as the CO2 levels rose after each Ice age. 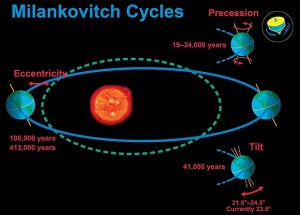 2) Even the moon may effect climate to some extent as the lunar orbit pulls the earth towards the sun slightly during the lunar month increasing slightly solar radiance. The orbit of the moon is also pitched at an angle to the equatorial plane of roughly 20 degrees to the Earth-Sun plane and precesses with an 18.6 year cycle between 18.5 and 28.5 degrees. This causes small changes in the lunar tides both of the ocean and the atmosphere. Although these effects in the atmosphere are swamped by the solar thernal tides there is some evidence that droughts in northern continental also areas follow an 18 year cycle.

3) Cosmic Rays. Cosmic rays entering the atmosphere creating showers of ionised particles. Ions then  form the seeds for cloud formation and this is the principal of a cloud chamber in particle physics. Supersaturated air condenses out as clouds along the trajectories of ionising particles. Normally the solar wind combined with the Earth’s magnetic field deflects many cosmis rays away from earth. However during active phases of the sun spot cycle the solar wind increases reducing the number of cosmic rays entering the atmosphere. Henrik Svensmark has argued that during quiet  periods of the sun the climate cools because there is a higher cloud cover reducing the energy input to the surface. The little Ice age corresponded to the Maunday miniumum which was a long period without sunspots in the middle ages. This is a controversial theory which would undermine AGW if true. Experiments are under way at CERN at a facility called CLOUD which should be able to answer this one way or another.

4) Solar variation. The intensity of the sun varies with the 11 year sun spot cycle. The energy fluctaution is relatively small and is measured to be about 1.3 Watts/m2 [1]. However, this is more or less the same  as the total estimated radiative forcing caused by  human emissions of CO2 from pre-industrial times until today. The distribution of solar energy to different parts of the Earth also varies with the earth’s orbit around the sun and the precession of the Earths rotation access thought to be the cause of Ice Ages (see figure above).

4) Oscillations in Ocean surface temperatures can cause huge  changes in the flux of heat across the globe thus  effecting climate over short periods. These occur in the Oceans which are a reservoir of heat energy. The most famous example of this is El Nino/La Nina in the tropical Pacific. Similar oscillations occur in the Atlantic- Atlantic multidecadal oscillation (AMO). These oscillations cause local swings in weather over periods of one year or so, rather than long term climate change. 1998 was the warmest year in recorded history because of a strong El Nino and not particularly by  AGW.

5) Land change. Mankind has changed the natural landscape to a remarkable degree through agriculture and settlements. Northern Europe would naturally be mostly forest if humans had not transformed the countryside into farmland and towns. These processes change the “albedo” of the land  which changes the amount of solar energy that is reflected or absorbed by the surface. Cities also heat the surounding areas simply through the extra energy they generate.

6) Natural Disasters. Every 50 or so years there is a major Volcanic Eruption which emits sufficient ash particles into the stratosphere to effect the global climate. Mount Pinatubu effectively cooled the planet by up to 0.5 degrees for 3 years. Much larger volcanic eruptions in the distant past have had far more serious cooling and for longer periods. A large meteor impact would also  have a catastrophic impact on climate plunging the Earth into an extended period of cooling as vaporized rock and dust is thrown up into the upper atmosphere.

7) AGW –  The  enhanced greenhouse effect from CO2 emissions by Man – or so called anthropogenic climate change. The basic physics of the enhanced greenhouse effect leads to a small logarithmic warming. Thus the effect of doubling CO2 density (eg. doubling  from 50 to 100 ppm of CO2 is the same as say doubling from 1000ppm to 2000ppm). Current levels are 380 ppm which is a 30% increase in atmospheric CO2 levels since pre-industrial times . The multi-trillion dollar question, however,  is whether an eventual doubling of CO2 will lead to  negative effects over the next 100 years ?  Plant life will actually benefit greatly from rising CO2 levels, which will remain well below levels which could  conceivably effect animal metabolism – so its really is just the light warming predicted that is the primary issue.  So is it really worth western countries risking economic suicide now to deploy policies which at best can only delay possible global  warming, considering that developing nations will anyway continue to  increase their CO2 emissions?  I am convinced that whatever the UN or individual governments may decide, or whatever carbon trading schemes are invented  – eventually all recoverable resources of fossil fuels will  eventually be extracted and burned by someone. We might delay it  a few years – but it will eventually happen. Therefore we need to understand the impact of a doubling of CO2 means for climate. The direct effect on the Earth’s energy balance will cause a temperature rise of about 1 degree. The climate feedback factor  describes how the rest of the climate system reacts to that enhanced greenhouse forcing. If as IPCC and most climate scientists believe that the feedback is positive then we end up with between 2 and 4.5 degrees. However, some scientists predict that the feedback could even be negative (increased clouds, lower water vapour) in which case the increase could be negligible. What seems sure is that there is no run-away warming effect as this would have happened already at much higher levels of CO2 which have occured previously in the Earth’s long history.