Greenhouse effects of water and clouds 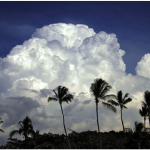 regulate its temperature while solar radiation increases by a third. The parameters of this model assumed that the net climate feedback of the greenhouse effect of water and clouds is strongly negative. This is in complete disagreement with all current models and the vast majority of  experts. The standard argument that the feedback must be positive is as follows.

Any surface temperature rise will lead to more evaporation from the ocean since warmer air can hold more vapour pressure. More water content then leads to a larger greenhouse effect with enhanced warming. The saturation vapour pressure of water follows the Claussius Claperyon equation which is approximately VP = Cexp(-DH/RT) (DH = Latent Enthalpy, R Gas constant, T=Temperature. The water holding capacity of the atmosphere increases by something like an extra 8% for a 1 degree rise in temperature. In effect all IPCC models assume that the Relative Humidity will remain constant which means that the absolute humidity or water content of the atmosphere will increase with temperature. More water vapour in the atmosphere leads to an enhanced greenhouse effect causing more warming – a positive greenhouse effect. The greenhouse temperature effect of water depends logarithmically on the water content [1] so if all this extra 8% of water is held in the atmosphere the net effect is an extra 1.2 degrees warming giving a feedback of about 1.7 Wm2/degC. The IPCC models all use values of between 1.0 and 2.3 Wm2/degC for water vapour feedback. So how possibly could the net feedback assumed in Water World actually be negative ? The basic hypothesis is as follows.

Increased evaporation from the oceans in response to an external forcing increases cooling from the ocean surface and raises the mixing ratio of water and air. The classic theromodynamic graph for the atmosphere is called the skew-T graph. Radiosondes released from weather stations measure the dew point and temperature profiles of the atmosphere at one point on earth. This profile gives an understanding of the cloud base and potential for unstable rapid convection leading to thunderstorms. One basic point however is that rising air packets condense into clouds at some height (Pressure) where the latent heat is released which changes the dry adiabatic lapse rate to the moist adiabatic lapse rate. This is shown in figure 1. The Skew-T diagram is a plot of Log (Pressure) with fixed temperatures at 45 degrees to the right and dry lapse rates at 45 degrees to the left. The curved green lines to the right are the moist lapse rates for condensing air which are highly temperature dependent.

Above a certain height called the Lifting Condensation Level the lapse rate decreases because of the warming effect of latent heat release. The divergence from the dry lapse rate depends greatly on temperature. So more radiative forcing leads to more evaporation leading to thicker clouds (condensation) which reduces the lapse rate.

The lapse rate is fundamental to the greenhouse effect because it changes the temperature of the effective height where heat is free to radiate into space. It even reduces the CO2 greenhouse effect since the effective height increase by doubling CO2 can be offset by an increase in temperature at that height through increased condensation. This is especially true in the tropics where increases in clouds and  daily thunderstorms effectively transport large amounts of heat to higher altitudes. IPCC models also recognizethat  changes in lapse rate leads to a negative feedback with external forcing although with a large range of values:  – +0.1 to -1.5 Wm2/deg.K. In the tropics, an increase in convective clouds is very effective at reducing the greenhouse effect from additional CO2. Increased anthropogenic CO2 raises the height where infrared radiation (in absorption bands) can radiate to space which is normally colder, thereby allowing less heat to radiate. However this can be disrupted by condensation of rising saturated air which then heats these levels far higher than it was before. This short circuits the greenhouse effect of CO2 (see figure 2). 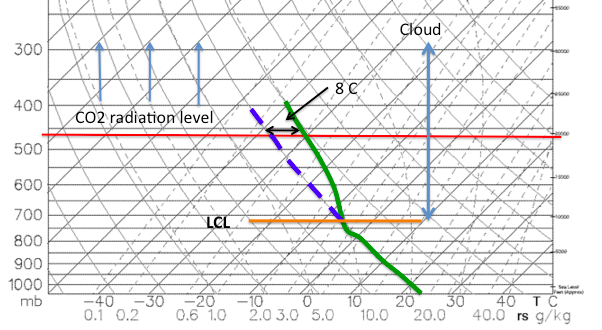 Another effect of increased evaporation and associated increases in large convective clouds is more precipitation (rain)  which can  then  dry out the upper atmosphere. A dryer upper troposphere will then leads to a decrease in high altitude clouds thus reducing the greenhouse blocking effect of high clouds. Satellite data would appear to support the reduction in humidity in the upper atmosphere (see here).

Albedo: The evidence is that an increase in low cloud cover leads to an increase in albedo thereby yielding a net negative feedback. Low and mid level thick cloud reflects sunlight  thereby lowering the incident short wave radiation incident at the surface. Anyone sitting on a beach in the UK can confirm that there is a marked temperature drop as a cumulus cloud passes in front of the sun. High level cirrus cloud is measured to have  a net positive feedback as it absorbs and re-radiates outgoing infra red. Figure 2 shows the relative cloud cover over oceans versus latitude for summer and winter. Cumulus clouds are concentrated in the tropics and low level stratus clouds increase at higher latitudes with solar forcing in the summer.

The tropics must be key in the overall energy balance of Earth. The vast majority of the water vapor in the atmosphere is in tropical regions and temperatures rarely rise above 30 degrees over oceans. It is the desert areas which have the highest extremes of temperatures because a lack of clouds leads to intense heating during the day, and the tiny water vapor greenhouse effect leads to large energy loss at night. 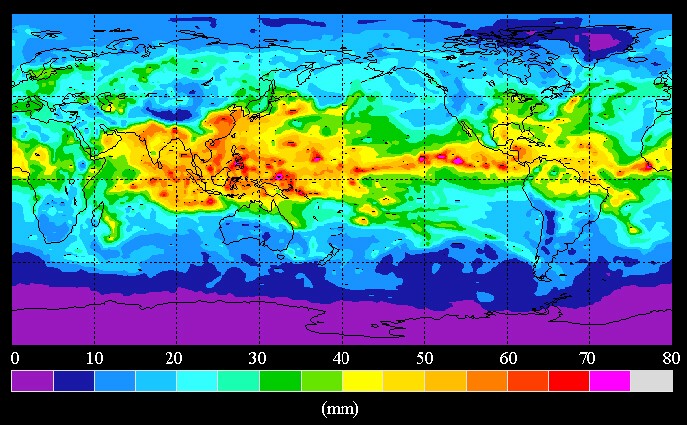 The IPCC recognizes that the greatest uncertainty in their models is the feedback effects of clouds. The message of IPCC reports has been to alert the world to the perceived dangers of accelerated global warming resulting from carbon emissions all based on large positive feedbacks. The stability of temperatures over the last 4 billion years suggest instead that the natural feedback effects of water vapor and clouds are actually negative and will act to dampen any extra CO2 forcing caused by man.