Does the Moon affect the Earth’s Climate ? 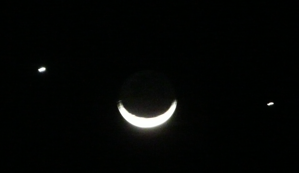 Smiling Moon with Jupiter and Venus

The Moon is Earth’s nearest astronomical partner and we all know that it is the principal cause of the ocean tides. Since it has such a large effect on the oceans  can it also affect the Earth’s weather? The atmosphere is also a fluid and so the Moon generates gravitational tides there as well. However, these are much smaller than the Sun’s thermally generated  daily “tides” which heat and expand the air diurnally mainly through absorption by water vapour. The Sun’s heating then  also drives huge convection cells thereby generating the earth’s main wind systems like the  “trade winds” westerlies etc. The Earth’s rotation turns these winds westerly in the northern hemisphere and easterly in the southern hemisphere.

Why is it that the Moon’s gravity has a larger effect on the ocean’s tides than the Sun? The Sun has a far larger direct gravitational force than the Moon. The Moon orbits the earth and then both together orbit the Sun. The tides are a subtle effect caused by traction (lateral attraction) of the oceans by moon’s gravity and because the Earth – Moon system rotates about their centre of gravity which is a point some 4000 km from the Earth’s centre. It turns out that the tidal force is proportional to 1/r**3   and not  the direct gravitational  1/r**2 force. This explains why the lunar tidal force is stronger than the solar tidal force because it is over 500 times closer to the earth. The tides are caused by 2 tidal bulges – one nearest to the Moon and the other on the opposite side to the Moon. The one on the opposite side is actually the result of the centrifugal effect of the Earth Moon rotation. In fact the ocean on the side opposite to the Moon is bulged outward due to this centrifugal force . Tides are greater at higher  latitudes which is why the strongest tides in the world are found in Canada and Northern Europe whereas relatively weak tides are found at the equator.

Enough about the oceans. What about the atmosphere? There are also tides in the atmosphere but they are dominated by the daily solar heating effects which of course also drive the weather systems. The lunar tides are more subtle but have been measured in the Antarctic and even at the equator. The 12 hour cycle induces small but regular pressure changes and winds which can reach 10m/sec. The Earth’s weather is driven by the Sun’s heating especially in the  tropics which cause huge convection cells. If the Earth did not rotate then the warm air from the tropics would tend to move north or south and mix with colder air. The coriolis force of the Earth’s rotation drives the prevailing winds, such as the trade winds, westerly in the Northern Hemisphere. Storms and depressions are generated at the interface of the cold polar air and the warmer temperate air.

We often hear the remark that weather systems are chaotic and a hurricane can be triggered by the flapping of  butterflies’ wings. Therefore it seems a reasonable hypothesis that the lunar tides may be one trigger for stormy weather, especially as tides are stronger nearer the poles. During the lunar month there are 2 so-called spring tides when the Moon and Sun align so their tidal effects sum up. The above hypothesis would imply more stormy rainy weather with the spring tides. Another effect is the precession of the lunar orbit with a timescale of about 18 years. This actually changes the inclination of the Moon in the sky, effectively moving the tidal bulge to a more or less northerly position. I am aware of at least one study that has shown a correlation of droughts in North America and China with this 18 year lunar cycle.  Here in Italy no-one would ever plant seeds or bottle wine except on what is called “luna callente” – or the falling moon (after the full moon). I don’t believe there is any real evidence that this has any effect at all but a surprising number of Italian scientists believe it as well ! Similar folk lore about the Moon’s effect abound in many cultures, so what other ways can the moon affect the weather?

There are 2 other direct astronomical effects the moon has on the Earth’s radiation balance and there seems to be one very important long term benefit.

1) The centre of mass of the Earth Moon system is actually about 4000 km from the centre of the Earth. As the Moon orbits this point so too does the Earth “orbit” the centre of mass point. In other words the Earth changes its position relative to the Sun by about 8000 km.  The mean Earth-Sun distance is about 150 Million km so the monthly change in solar radiation caused by the  1/R**2  attenuation is about a 10**-4 effect leading to an approximate 0.03 degrees change on the earth.

2) Reflected sunlight from the Sun.  So-called moonshine is simply light reflected or re-emitted from the moon and this radiation serves to heat the earth slightly. This also varies with the phases of the moon during the month. This extra radiation is just 10**-5 that of the  direct solar energy so this also gives a roughly 0.01-0.02 degree effect.

3) Stabilising the Earth’s axis. It seems likely that without the moon’s stabilising gyroscopic effect the earth’s axis would be more chaotic. The seasons rely on the axis being tilted to the orbital plane of the earth-sun by about 23 degrees. Computer simulations show that the moon’s tidal effect has probably stabilised this tilt over billions of years. The axis of Mars seems to be affected by a chaotic effect caused by the influence of other planets in the solar system.  Clearly maintaining summer, winter conditions for each hemisphere has had a massive impact on the earth’s climate and this could also be the key to life developing.

In conclusion, the Moon does affect the Earth’s climate. It may even be fundamental to the maintaining and stabilisation of the seasons. There is also growing evidence that the Moon can influence generations of storms and rainfall, (although untangling this effect from the influence of Sun Spots is not universally accepted). Eventually energy loss by tidal forces will slow the length of the day to say 25 hours and the Moon’s distance from the Earth is also slowly increasing. Luckily any noticeable effects will take 10s of millions of years and way before then the next Ice Age will be far more of a problem for mankind.

I took the picture above of the Moon from  Mombasa  airport while boarding a plane on  December 1st 2008. I had no idea that Venus and Jupiter were actually in coincidence with the Moon’s position that evening. It was a truly remarkable sight and reminded me that we shouldn’t take the Moon for granted !

This entry was posted in Climate Change. Bookmark the permalink.

27 Responses to Does the Moon affect the Earth’s Climate ?