Abstract: This post studies the time lag in global  warming following incremental increases in CO2 forcing. It uses a GCM [1] to parameterize these  “inertia” effects which are mainly due to  slow ocean warming and ice melting. The  Mauna Loa CO2 data [2] is used to calculate annual  temperature changes for different net climate feedback values by using the observed annual increments in radiative forcing. These temperature changes are then compared to the HADCRUT3 temperature anomaly data [3], to determine the range of feedbacks compatible with the data.  Finally the IPCC  A1B (business as usual) scenario for future CO2 emissions [4]  is used to predict long term  global warming. After 2100, it is assumed that alternative non-carbon energy sources (Nuclear Fusion) take effect to greatly reduce net emissions leading to a gradual fall in CO2 levels back to current values by 3000 as the Oceans slowly re-absorb excess anthropogenic CO2. By then the Earth will likely have begun a gradual cooling phase leading eventually to the next glacial period.

Recently Willis Eschenbach wrote an article on WUWT A Demonstration of Negative Climate Sensitivity using CERES data to show evidence of negative feedbacks in the tropics. He was criticised in one of the comments because he was assuming an immediate temperature response to a change in forcing. The oceans take decades to warm to a new equilibrium value. I have also been criticised likewise for fitting global temperature anomalies DT(t) dependence to a logarithmic CO2(t) dependence. Here I will try to look in detail at this “warming inertia” problem.

GCM models are supposed to include all such inertia effects such as ocean heat uptake, ice melting, precipitation, albedo changes and the like. One of the standard GISS model II runs included in EdCM [4] is the effect of a doubling of CO2 by a single pulse occurring in 1958 and then tracking the climate response. I have fitted the resultant response curve from this run to a form

The result of this fit is shown in figure 1. yielding an e-folding time of ~ 15 years. This parameterization is  then assumed to represent  the overall climate response  to any sudden change in external forcing. 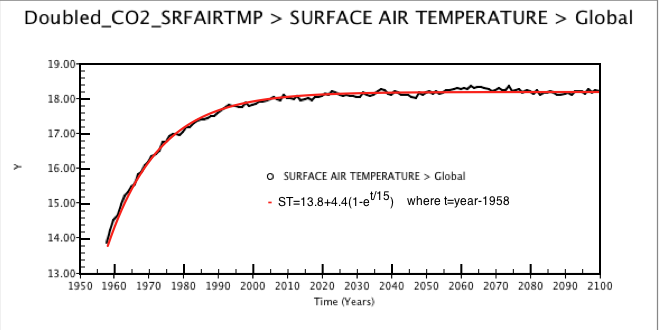 Fig 1: Response temperature curve from a pulse doubling of CO2 in 1958 and fit described i the text

We can therefore use this formula to calculate the temperature response year by year to AGW based on actual Mauna Loa CO2 data [2]. I have used a smoothed version of this data and then extrapolated backwards to pre-industrial values at 1750 . The trend data used in the calculations are shown in Figure 2. 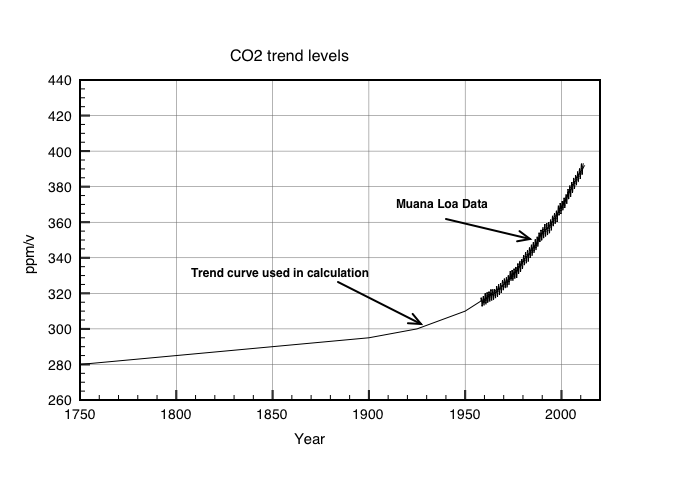 The calculation  tracks the temperature response

including a feedback term F

We assume that a pulse of CO2 is emitted to the atmosphere once a year. The quantity of CO2 is calculated from the Mauna Loa data shown in Fig 2. Each pulse is then tracked through time according to equation 1.  The radiative forcing corresponding to each pulse is calculated using the canonical formula [5].

Calculations have been done  for 3 different net climate feedbacks to the measured Mauna Loa CO2 forcing in the above model. This assumes that all the observed temperature anomaly trends are due only to CO2 forcing. The results are compared to the observed HADCRUT3 anomaly measurements in Figure 4. 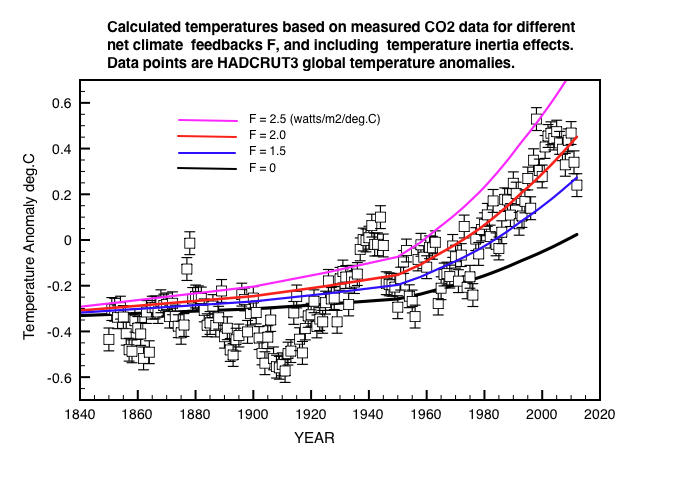 Fig 4: Comparison of data with 3 feedback scenarios in the standard CO2 forcing model.

The data favor a positive feedback of about 2 watts/m2K-1. A lower value of 1.5 Watts/K-1 is not ruled out while 2.5  watts/m2K-1 is incompatible with measurements. Therefore assuming that the only driver over the last 160 years was AGW (see below) this study confirms that a feedback of ~ 2 W/m2K-1 is supported by the data.  This corresponds to a climate sensitivity of 2.1 deg.C for a doubling of CO2. The current CO2 content of the atmosphere  would also then  lead eventually to a warming of  ~ 1 deg.C after the planet systems equalise. Of course CO2 emissions will continue beyond 2012 as we will investigate next.

There is however, also evidence in the data of  a 60 year oscillation  superimposed on top of an underlying AGW trend [6].  The observed halt in  warming since 1998 would then be due to a turnover from a peak in the oscillation around 1995.  This slow down would then likely continue for another 20 years as natural cooling counteracts warming, in which case  feedback values of 1.5 watts/m2/deg.C or less would be favoured. Another 10 years of data should be sufficient to decide this.

Most scenarios for the future stop at 2100 with seemingly disastrous consequences for life on  Earth as temperatures apparently continuing to rise ever faster into the future. Such warming cannot possibly continue for ever because 1) fossil fuels will run out or become uneconomic 2) Large excesses of  CO2 will eventually be absorbed in the Oceans over time periods of several 100s of years  at a rate that increases with concentration (partial pressure). Therefore I will take a much longer term scenario which follows the (business as usual) IPCC model A1B [4] until 2100, but thereafter assumes that abundant non carbon energy sources such as Nuclear Fusion become widely available. This gives mankind a further 90 years  to finally get Nuclear Fusion power generation to work, leading to a gradual reduction in CO2 levels from 2200 onwards. I seriously doubt that current low density renewable energy alone can ever maintain a technically advanced society. 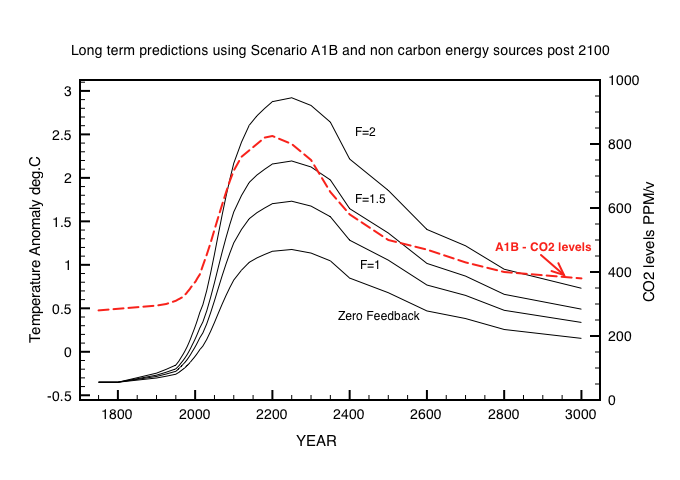 Figure 4 shows the future scenarios based on an A1B future CO2 levels which stabilize by 2200 at around 800 ppm with the replacement of fossil fuels by non carbon sources. Thereafter CO2 levels fall as  ocean sinks  absorb CO2 over ~ thousand year lifetime. Here positive feedbacks work in reverse accelerating temperature reductions. By 3000 the Earth’s climate  is more or less back to where it is today. By then cooling towards another glacial period  may well have already begun, in which case raised CO2 levels will be an advantage !

1. Time lags in the climate system response to any increase in radiative forcing have been parameterized using  a GCM. This gives an e-folding reaction time of about 15 years.

2. A Calculation of annual warming due to measured Mauna Loa CO2 increases taking into account  time lags favors a climate feedback value of 2 W/m2K-1 if post 1958 warming is entirely due to CO2. If instead a 60 year oscillation is superimposed the feedback value is likely 1.5 W/m2K-1 or less.

3. A prediction can be made for  future long term temperatures  calculated using  IPCC scenario A1B for future CO2 levels.   It is assumed that after 2100 emissions  fall as non-carbon energy sources are adopted  leading to a gradual fall in CO2 levels as the Oceans re-absorb excess CO2.  The peak rise in temperature  then occurs around 2250 with a maximum increase above pre-industrial levels of   3.4 degrees C. Thereafter CO2 levels and temperatures slowly revert to natural levels over  another 1000 years. By that time we will probably have the onset of another major glaciation to worry about.

6. Empirical evidence for a celestial origin of the climate oscillations and its implications. Scafetta,N. Journal of Atmospheric and Solar-Terrestrial Physics