A striking feature of the assymetric alignments of continents  is not just the  1/3 more ocean surface in the Southern hemisphere but that its largest continent Antarctica is situated directly over the south pole. The world’s oceans all converge into one circular channel which drives the meridional overturning circulation mixing oceanic global water. A very good summary of all this is given in  Climate and the Oceans by Geoffrey Vallis, PrincetonUniversity Press. 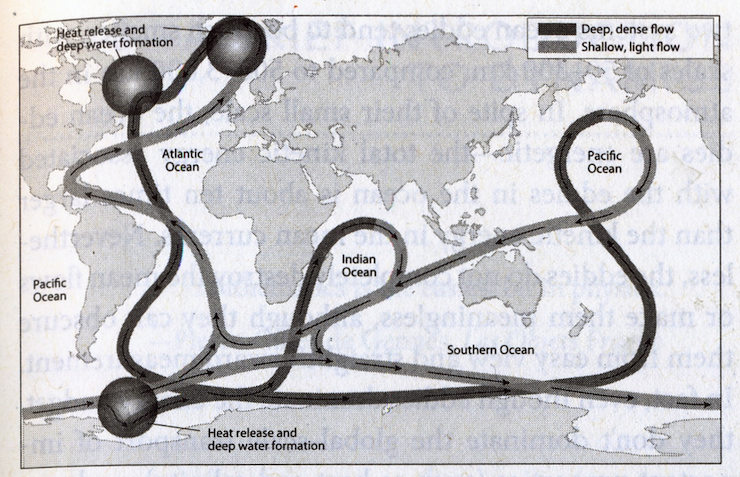 Discussions on the Earth’s climate usually focus on the atmosphere and how it reacts to changes in CO2 greenhouse forcing. At least as important are the Oceans which store 1000 times more solar energy and themselves transport much of the Earth’s heat around the planet. The thermal capacity of the Oceans is much larger than land or the atmosphere. There are four main climatic effects of the 70% of Earth’s surface covered by oceans.

1) They stabilise temperature extremes between night and day and between seasons.
2) They cause a time lag in the seasons due to their massive heat capacity.
3) They transport heat from the equator to the poles.
4) They drive Earth’s weather and even minor variations can disrupt disrupt it : eg ENSO.

The prevailing winds drive two great subtropical “gires” circulating currents in each ocean and each hemisphere. The Atlantic and Pacific oceans also have a third Northern arctic gire. The gires are strongest on the western edges of Oceans due to the Earth’s rotation and cause boundary currents such as the Gulf Stream.

Wind drives the ocean surface generating net current flow which is approximately at 90 degrees to the wind. This is because the Coriolis force adds a torque to the wind driven motion. This effect is called Ekman drift, and is the cause one of the most amazing Oceanic effect in the open ocean around Antarctica. Strong winds freely circulate Antarctica where all oceans join up in one open channel from South America to Australia and include the notorius Cape Horn winds. This generates the ACC strong current. In addition the effect of this clockwise circulation is to pump huge quantities of surface water northwards due to the Ekman drift. This then helps powers the global overturning meridional circulation. Deep cold water rises to replace surface water forced northwards – so called upwelling. In the Atlantic this water actually originates from Arctic latitudes and the end result is a net heat flows from the southern hemisphere to the northern hemisphere. The second driver for this north south circulation is  buoancy. Cold dense surface water sinks at northern latitudes and slowly moves at great depth towards the equator. For the Pacific ocean it is gradually warmed from above and rises at the equator. In the Atlantic ocean most of the deep cold water originating around the North Pole makes it through to rise up in the southern hemisphere. This seems to be mainly because the water in the northern Atlantic is saltier than the northern Pacific and therefore denser. This completes and overturning global circulation transporting huge amount of heat and connecting the two poles. The Pacific and Indian Oceans form vertical circulations between the equator and northern and southern latitudes. The Atlantic though is the  key to the engine driving the overturning  circulation. 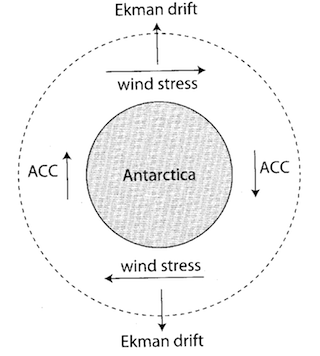 The Atlantic causes a net transport of heat from the Southern Hemisphere to the Northern hemisphere. This has been measured by satellite. 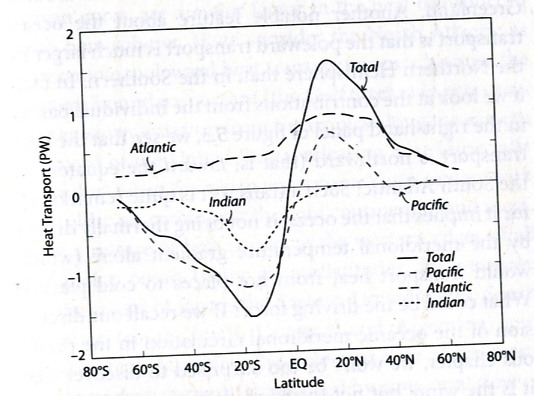 Net Global Heat transport by the Oceans(negative is southwards). Note how the Atlantic causes a net heat flow from the southern hemsiphere to the northern hemisphere. ( from Climate & the Oceans)

If this circulation mainly in the Atlantic were to diminish significantly for some reason then the Arctic would become much colder and such a disruption in the meridional current may  be involved in triggering Ice ages. The closing of the Panama Isthmus and the drift of Antarctica over the South Pole coincides with global cooling over the last 5 million years leading to a series of intense glaciations. Perhaps this configuration is optimal for glaciation at both poles.

Acknowledgments  to  Climate and the Oceans, G. Vallis