The recent  Mail on Sunday article  by David Rose showing essentially no global warming for the the last 16 years  has caused quite a stir. The data he used for the article are  the Met Office/UEA own dataset – Hadcrut4. The Met Office response to this is available  on their news media blog .  Notwithstanding various objections  they essentially have to agree that David Rose’s article is correct and that there has indeed been no warming. However they are sticking to their model predictions of  0.2 degrees/decade, although admitting that natural variations are not well understood. In other words if we wait long enough warming will surely restart with a bang.  I was recently at a presentation by the Met Office CEO John Hirst. He showed a slide “Global temperatures are evolving as predicted in response to Human influence”. You can see a photo of that slide here. I was interested in tracking down the slide and recalculating the data up to 2012. 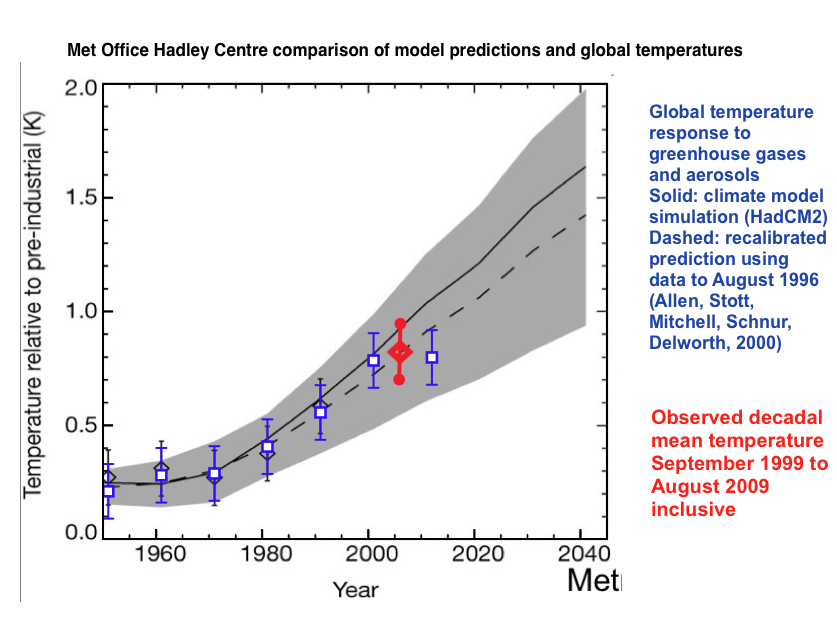 Updated Met Office slide showing in blue temperature data up to September 2012. Points are decadel averages centred on 1951, 1961 etc. The red point was the Met Office update 1999-2009. The original points are in black.

I found the slide in a presentation by Matt Collins of Exeter University. I used the latest Hadcrut3 data and made decadel averages centered on 1951, 1961 etc as ascertained from their plot. I then carefully overlaid the points onto the slide. My points are shown in Blue and overlap well but not quite exactly with the Hadley points (I suspect they are using slightly different start dates). My two new points are those for 2001   and 2011 ( 7 year average). Their 3 year old update is shown in red.   The model has already been re-callibrated to fit the data (dashed curve).  Note how the plot expands the errors to cover low options. The grey area includes the overlap of both the original and the  re-calibrated predictions. The flattening of temperature is clear but it looks like they are safe for another 10 years if they do  a bit more recalibration. If temperatures continue to remain flat then probably egg will need to be wiped from faces.