An Excel spreadsheet based written by Ken Gregory is now available which calculates the radiation flux based on the original model.  The spreadsheet is easy to understand and  can be downloaded here. Meanwhile I have been working to handle properly the temperature dependence of barometric pressure and that fraction of the CO2 absorption band within the Black Body spectrum. The new source code is for this is available here.

Original Model: Our simple radiation model of the greenhouse effect  of CO2  is based on vertical layers in the atmosphere each in local thermal equilibrium(LTE). The temperatures of each layer are fixed by a  mean lapse rate of 6.5K/km. The surface temperature is assumed to be 288K and the surface then radiates IR upwards as a black body. The barometric pressure for each layer and the overall CO2 concentration in air determines the partial pressure of CO2 within each layer.  The fraction of the overall Black Body spectrum falling within the main CO2 absorption band was simply estimated to be 0.2. Beers-Lambert’s law is then applied, using lab measured parameters for CO2 absorption, to determine the transmitted and absorbed flux of radiation at each level.  The assumption of LTE implies that for each level an equal amount of radiation to that absorbed by CO2 molecules is then re-emitted. This radiation forms part of the so-called “back-radiation”. Therefore the net upward radiation flux at each level is the transmitted radiation from warmer levels underneath minus the back radiation from all the cooler  levels above.  Some crucial points about  the greenhouse effect are:

1. If the lapse  rate were zero then there could be no greenhouse effect, even if the atmosphere was 100% CO2.

2. An atmosphere without greenhouse gases (only N2,O2) would radiate directly to space from the surface. The surface temperature would then be 255K and any  lapse rate would fall with height from that value.

3. Could there be any lapse rate without greenhouse gases? It has been  argued that if radiation cannot cool the top of the atmosphere to space then there can  be no temperature gradient. So a simple 1-d atmospheric model with a fixed surface temperature and without greenhouse gases results in  an isothermal atmosphere , and  no convection. However the real world is 3-D with differential equatorial solar heating with multiple seasonal and diurnal variations. This surely must result in Hadley convection cells  transporting heat from the equators to the poles. I am sure that some lapse rate would still exist even without a radiating atmosphere.

Updated Model: For the updated Model I have made two improvement  to better quantify the radiation model. Firstly, I have properly calculated Frac – the fraction of the BB spectrum falling within the CO2 band. To do this I used Wien’s displacement law which states that the basic shape of the SB spectrum is the same at any temperature but is displaced by wavelength. Since temperature falls with height,  I used the Wien percentile table giving  the product of wavelength*T  in order  to determine Frac as a function of height in the atmosphere. This is shown in figure 1. 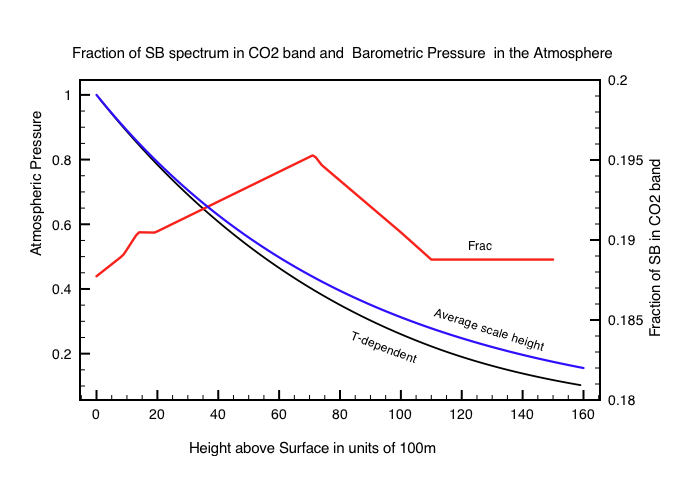 Corrections to the barometric pressure profile and FRAC – the fraction of the total IR spectrum energy lying in the CO2 band 13-17 microns. This band corresponds to the Beers-Lambert absorption data used in the calculation.

The second improvement is to use the temperature dependence of the Barometric pressure equation rather than a single scale height.  i.e.  P =P0*exp(mgz/kT) which changes the pressure profile with height slightly. This changes the partial pressure of CO2 used in the flux calculation. The comparison of both changes are shown in figure 1.

The resultant  profiles for up-going radiation in the CO2 absorption band after implementing these changes is shown in figure 3 and compared to the simple model results. 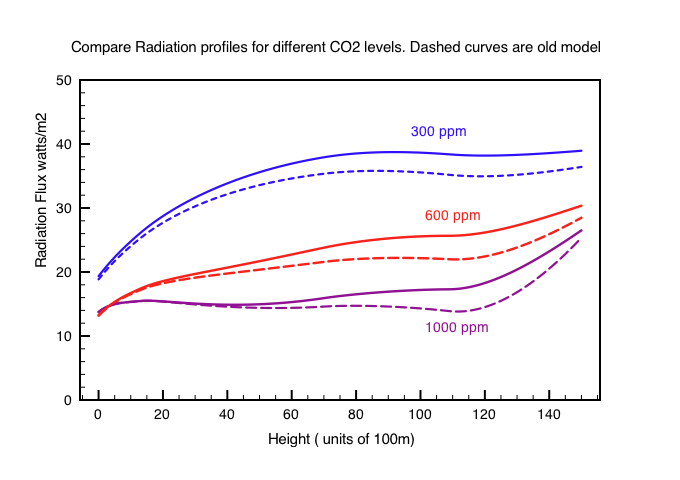 Result: The shapes of radiation flow are now steeper in the upper atmosphere. However the overall forcing on the surface temperature to offset the fall in outgoing radiation is about the same ~ 1.1 deg.C (ground) 1.5 deg.C (TOA). So the simple model still gives a good approximation !