Why CO2 is not the cause of “Hothouse Venus”

Update 30/11: I have now updated the model to include all CO2 absorption bands. The new profile of absorbed radiation is shown  in Figure 4 below. The conclusion remains the same.

We have been led to believe that a “run-away” CO2 greenhouse effect is the cause of  very high  surface temperatures found on Venus, and that unless we curb carbon emissions  we risk a similar fate on Earth.  I am now convinced  that this narrative is complete nonsense because  CO2 absorption of IR radiation from the surface of Venus turns out to be tiny, and the reason for this lies with Wien’s displacement law.  Only  2% of the 740K Planck spectrum emitted by the surface actually falls within the main CO2 absorption band. While this is  indeed  absorbed within the first few meters,  the rest of the heat radiation (>90% of it) passes straight through.  I was myself surprised to discover this after  running my simple greenhouse model for Venus (described here).  I expected to see huge upward radiative transfer and  “back radiation” fluxes. Instead I found very small CO2 induced radiative transfer and almost zero back radiation. Essentially all CO2 sourced IR radiation is absorbed within each layer in the atmosphere, because the optical depth is small for the Venusian troposphere.  Wien’s displacement law then governs how much IR is absorbed by the atmosphere at each successive height above the surface.   To understand  this – just look at Figures 1 and 2.

CO2 is NOT the cause of the “greenhouse effect” on Venus !   Despite the fact that it forms 95% of the atmosphere, CO2  really is  an insignificant greenhouse gas on Venus ! 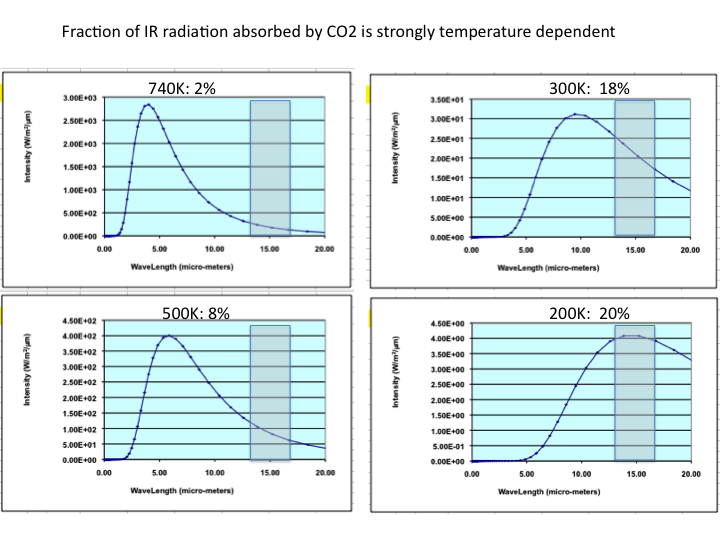 The top graph in figure 2. below shows  the energy fraction absorbed by the atmosphere at different heights above the Venusian surface. Note how it peaks from 45-55 km and then rapidly falls to just 3% by 61 km. The temperature at 50 km  turns out to be about the same as the Earth’s surface (288K) ! 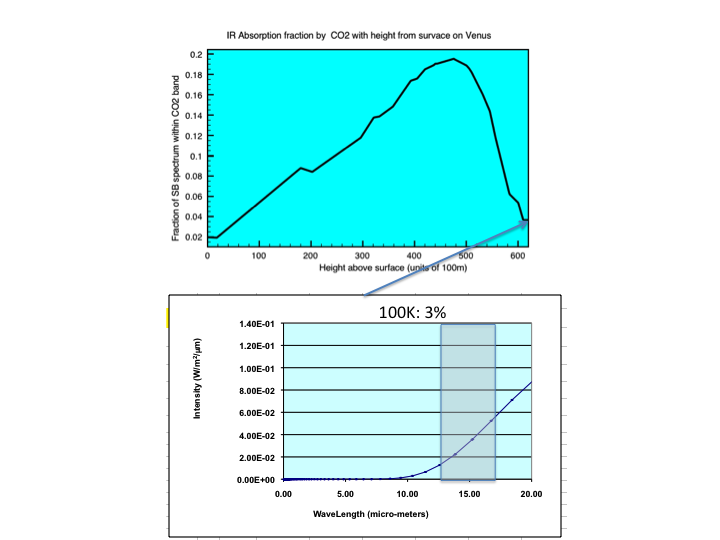 The CO2 greenhouse model is based on 100m thick layers, each in local thermal equilibrium at the measured lapse rate. The absorption and emittance of IR by CO2 molecules is calculated using derived values of partial pressure and measured Beer-Lambert absorption data. For Venus Ts= 740K, lapse rate = 10.45K/km, CO2=0.95, P0 = 93 atmospheres, g= 8.9 m/s2. The code can be found here and the result it produces are shown in Figure 3. 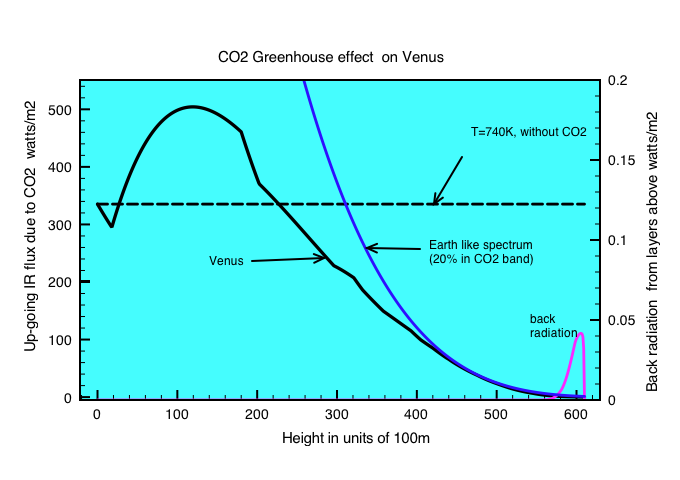 Fig 3: Black curve- Radiation flux within CO2 band 13-17 microns in the Venusian atmosphere composed of 95% CO2. The dashed curve shows the surface emittance in this band for a temperature of 740K (no CO2 present). The small magenta curve is the “back radiation” from levels above. It is zero until 60 km up in the atmosphere, as the optical length is << 100m below.

I am well aware that I have ignored pressure broadening of the CO2 absorption band, and also excluded other smaller narrow absorption lines. However, I think this cannot change the overall conclusion that the CO2 greenhouse effect on Venus is between 1 and 2 orders of magnitude too small to explain the high surface temperatures.  So if CO2 is not responsible for the scorching temperatures on Venus, what is ?

It must be the other 5% of the atmosphere, which contains  SO2 (150ppm), H2O (20 ppm) and  the thick H2So4  clouds covering the planet.  The high overall density means that even the partial pressure of H2O is not dissimilar to that on Earth. It is this greenhouse mixture  covering a much broader IR spectra which traps the bulk of the IR emitted from the surface. CO2 is insignificant in comparison.

Furthermore there are  violent convective circulations on Venus and strong polar vortex winds. Convection maintains the lapse rate moving heat up through the atmosphere far more effectively than by radiative transfer. When finally the air  sufficiently above about  60 km the heat can then radiate freely to space.

Update 30/11: The model has been updated to include all 4 absorption bands for CO2. The 4.1-4.5 micron band is important for the lower Venus atmosphere as the Planck spectrum shifts to lower wavelengths . The new profile with height is shown in figure 4 and the relative fraction for each band versus height shown in Figure 5. 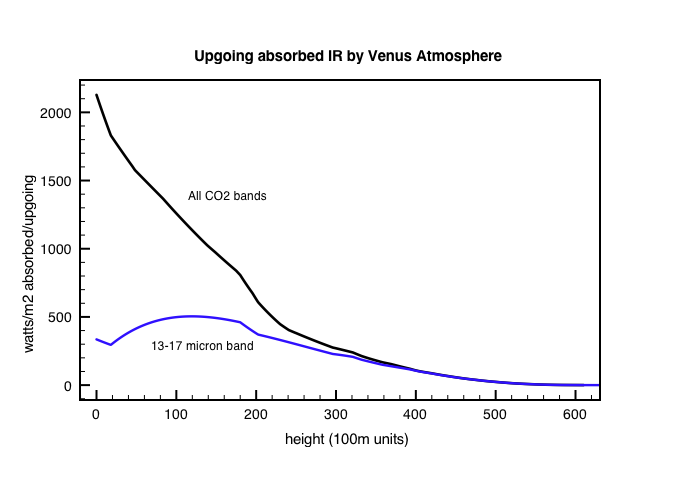 Fig 4: Radiation profile versus height on Venus for all CO2 absorption bands. The profile just for the 13-17 micron band is shown in blue. 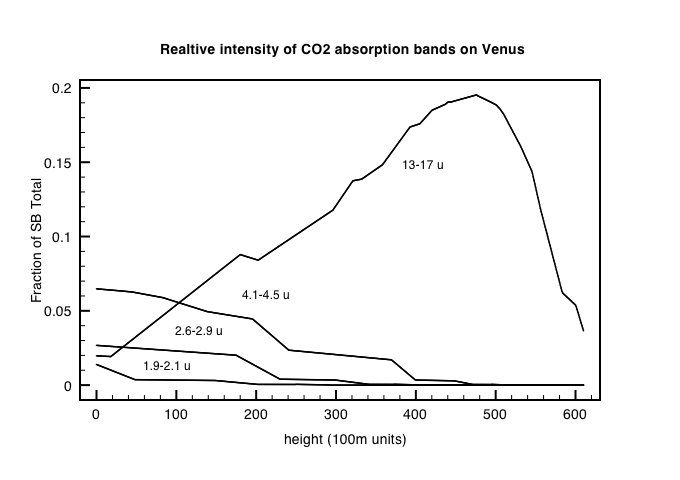 Fig 5: Relative fractions of full SB radiation falling in each of the 4 CO2 absorption bands versus height on Venus. The 4.1-4.5 micron band becomes dominant at low altitudes.

The atmosphere on Venus is fully opaque below ~40km for absorption of IR by CO2. There is no back radiation to the surface since all re-emitted photons are absorbed immediately. Heat is transported upwards by convection until a level where the atmosphere thins sufficiently to radiate to space.