A new paper from  (Briffa et al., 2013) presents an updated chronology of temperature anomaly series from Siberia (Yamal and Polar Urals) derived from tree ring data. Their results are also discussed on a realclimate post which responds to past criticism and compares the new results to their 2000 result. The original Yamal data caused huge controversy because they showed  a large 20th century warming at northern latitudes – see here. The new results are based on more trees and combine data from both the Yamal peninsula and Polar Urals. The data also have been made available from CRU  website for anyone to download, which is a welcome development. They show 20th century warming but no sharp final peak as in 2000.  I have been looking at the data to study general trends and the “anthropogenic” signal based on different time interval smoothing. Figure 1 shows the derived  yearly  temperature anomalies relative to 1961-1990. 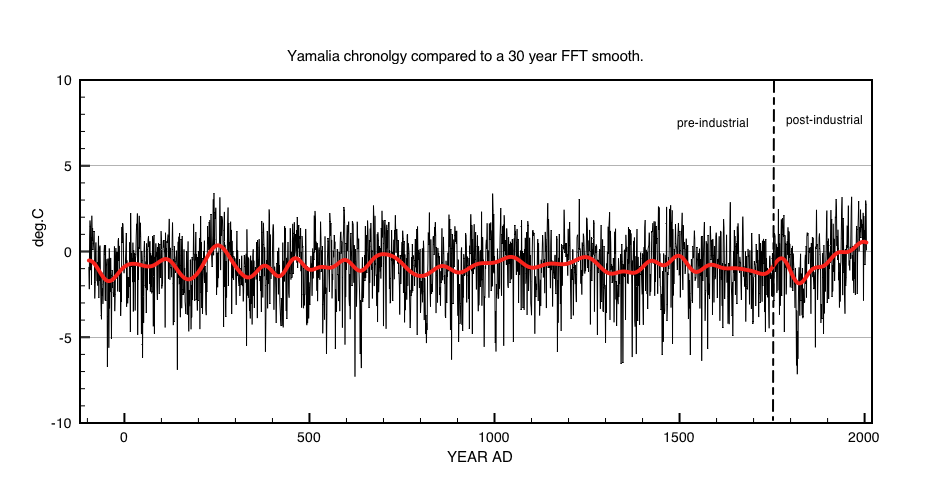 First we notice a fairly large large year to year standard deviation which the authors give as ~ 1.4C. A multi-annual averaging reduces the error on trends by approximately 1/sqrt(N). I have used a 30 year FFT smoothing algorithm rather than a running average so as to continue trends to the end points. I chose 30 years for the interval because one often hears that 20-30 years interval is needed to isolate any net CO2 induced warming from short term “natural variations”. The  Briffa et al. paper use a spline fit to the data with a “stiffness” parameter of n-years. They show results for 15 and 100 year filters. The FFT smoothed results for these time periods are shown in Figure 2. Thanks to a courteous reply on realclimate by Tim Osborn I was later able to locate  the code they used for their filter (see below).

I was then able to compare these filters with  the 100 year spline filter presented in the Briffa paper.  This appears to show a significant uptick in the 20th century although they qualify this with the statement. “Note that the smoothed values at the ends of the series are much more uncertain due to the presence of end effects on the spline filters”. They use a Fortran routine for the spline fit to the data with a stiffness factor equal to to 100 years. I was then able to use the same algorithm (see code from this paper) and reproduce their results.  Figure 3 compares the spline 100 year smoothing with that from the 30 year FFT smooth as used in Figure 1. They are remarkably similar and differ only at the end points.

Fig 3a: Comparison of the Briffa 100year spline filter (in black) and the 30year FFT filter (in red)

and in detail for the last 300 years. 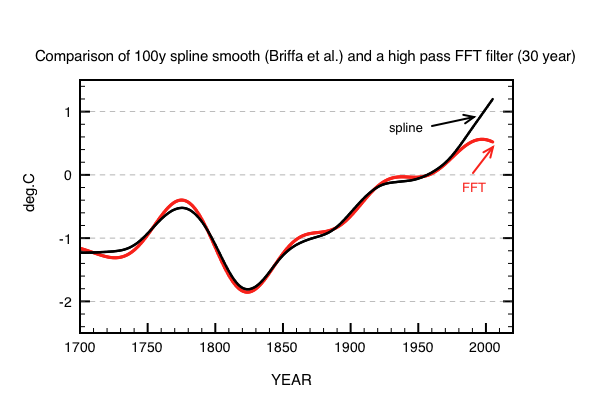 Fig 3b: Detail for the end point of both fits

The particular form of the 100y spline filter indeed exaggerates the end points to  imply  net warming of ~2C since 1900. If instead the 30year FFT filter is used then the uptick is reduced to a net warming since 1900 of ~1C.  This also agrees more with their averaged anomalies given in Table 1 of the paper :

Conclusion: There is an impressive amount of work presented in the new “Yamalia” paper – (ref 1). The general conclusion that the 20th century shows a warming trend is confirmed but  can no longer be termed as being “unprecedented” since a similar sized peak occurs ~250AD.  The 100 year spline filter used to smooth the data in Fig 13 exaggerates the final uptick. A 30 year FFT filter shows the same trends but avoids this end point problem reducing the apparent uptick by about a half.