The paper: “Spread in model climate sensitivity traced to atmospheric convective mixing by Sherwood, Bony & Dufresne, Nature 2/1/14”  has generated a lot of media hype that global warming by 2100 will be > 4C. It  has also  recently been highlighted on realclimate.

Professor Sherwood, of the University of New South Wales in Australia, told The Guardian: “This study breaks new ground twice: first by identifying what is controlling the cloud changes and second by strongly discounting the lowest estimates of future global warming in favour of the higher and more damaging estimates.

“4C would likely be catastrophic rather than simply dangerous,” Sherwood said. “For example, it would make life difficult, if not impossible, in much of the tropics, and would guarantee the eventual melting of the Greenland ice sheet and some of the Antarctic ice sheet” – causing sea levels to rise by many metres as a result.

The basis of this paper is an interpretation by the authors that lower troposphere circulation  described by  high sensitivity models is  more favored by observation than that described by low sensitivity models. But just how robust is this claim and what does it really mean for future global warming? I have been struggling  my way through the details of this paper for the last two days. My conclusion is that  all the media hype and claims made by Prof. Sherwood simply  don’t stand up to serious scrutiny. There are far too many inconsistencies in the analysis to justify any such bold statements as the one above.  The evidence provided in the paper from direct observation is simultaneously poor, selective and says little about climate sensitivity, its evolution, nor even that much about clouds.

The authors appear to me  to have assumed at the outset what it was they consequently set out to prove. They assumed that increasing low tropospheric mixing as the earth warms will lead to less low clouds despite higher evaporation rates from the ocean. Less low level clouds means net positive cloud feedback in climate  models despite an implied increase in medium and convective clouds. The paper then analyses 42 climate models with differing sensitivities (ECS) to demonstrate that indeed those with high sensitivity have more low tropospheric mixing in the tropics than those with low sensitivity. In order to show this they define 2 indexes to “measure” this mixing effect. 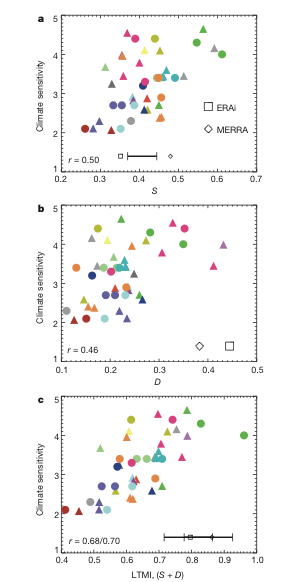 Indices from models of different sensitivity and “observations (ERAI and MERRA)

They then demonstrate that high sensitivity models have different values of S and D than low sensitivity models in these parameters and assume that this is due differences in low cloud feedback, although they don’t actually prove that. They also don’t describe how they derived these model indices.  They  finally combine both indices to give one LTMI (lower tropospheric mixing index) by simply adding the two together. To compare these indices to  data they need to use precisely the same criteria and this is where the real problems start. The data they use are ERAI + MERRA re-analysis of satellite data, themselves partly dependent on models. These are the inconsistencies I have so far identified:

The conclusion of the paper is based on the following assumptions.

High sensitivity models predict fewer low clouds in the tropics with increasing CO2 resulting in  positive feedback.  The underlying reasons for this  can be correlated to some arbitrary indices of moist circulation calculated  at specific locations for one instant in time. Observations made in these zones for these specific  indices are more similar to high sensitivity models than to low sensitivity models (at least for September).

Do other zones and times show similar correlations ? Even if the observed profile were shown to be  similar , does it logically follow  that the time evolution  would anyway follow  the high sensitivity models?  Where is the evidence for that ? The paper does not really demonstrate that high climate sensitivity is high. To do that you would need to demonstrate a time evolution over the tropics consistent with high sensitivity models. We should not accept the conclusions of the paper because as it stands, the evidence is far too  flimsy.

The test of a good paper is whether it provides sufficient information to allow someone to independently validate the results. This paper doesn’t and seems to me on balance to be more propaganda  than hard science.