Is TCR a measurable quantity?

Until yesterday I had assumed that climate sensitivity was the measured temperature rise after a doubling of CO2 in the atmosphere from 280ppm in the pre-industrial era to 560ppm as a result of human activity.

is the climate response

The discussion on Ed Hawkins blog concerning Lewis & Croc’s criticism of the AR5 climate sensitivity analysis has highlighted that the official IPCC’s definition of TCR is purely model based and not a directly observable quantity. Piers Foster writes

The IPCC definition of TCR is : “Transient climate response (TCR) is defined as the average temperature response over a twenty-year period centered at CO2 doubling in a transient simulation with CO2 increasing at 1% per year[Randel et al. 2007]”.

This is a model derived value calculated by drip feeding  CO2 into the atmosphere while keeping all other variables constant. It can only be the temperature rise since pre-industrial times when CO2 levels reach 560 ppm if nothing else changes. Lewis & Croc then try to untangle TCR from the observed temperatures by unfolding  model derived forcings (CO2,NO2,aerosols etc.)  and find that TCR lies in the range 1-2C with a most likely value of 1.35C. They are then criticised for doing this because they “rely” too much on observations !

For a similar reason I am also concerned about the reasoning behind why RCP8.5 emissions scenario results in a forcing of 8.5 W/m2 by 2100. This emission scenario “business as usual” results in CO2 concentrations reaching about 900 ppm by 2100. I assume that models have been used to calculate that this scenario results in a final net forcing of 8.5 W/m2. However those same models implicitly must have built in climate sensitivity in order to derive that forcing. The emission scenario not only covers CO2 but also other anthropogenic GHGs (methane, NCO, CFC)

In other words RCP8.5 has a built in feedback which can be calculated as follows.

Since the temperature rise must be the same in both cases

Or a built in “anthropogenic” booster to the above definition of TCR of about 50%. In fact if you look at the AR5 model forcings you can see that indeed the other GHGs add currently calculated to add ~0.9 W/m2 to the 1.8 W/m2 from increased CO2. However this now introduces model dependent “anthropogenic” feedback. 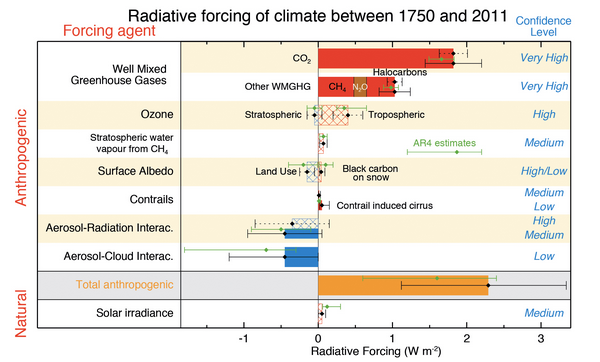 The root of the problem lies in the entanglement of models and  observations in the definition of TCR.  In my opinion it would be much simpler and cleaner to define TCR as a purely measurable quantity rather than one solely based on model simulations.

“Transient climate response (TCR) is defined as the measured average temperature response over a twenty-year period centered on the observed CO2 doubling.”

This definition TCR(E) can be measured by experiment. It is simply the average temperature rise when CO2 levels reach 560ppm. It can also be essentially measured today – see A Fit to Global Temperature Data. This definition removes the non-CO2 anthropogenic effects (CH4, NO2,CFC etc.) and avoids getting trapped by the model centric view. These effects are essentially anthropogenic feedbacks in a sense similar similar to climate feedbacks – e.g. increased H2O.

In all other branches of physics models make predictions and experiments then test the models. Why should climate science be different?

The emission scenarios are based on  socio-economic modeling based on current energy sources. Nearly all of our energy still comes from burning fossil fuels, while farming and transport depend on oil. This is also reflected in the signature of CH4 and NO2 emissions associated with CO2 emissions. Therefore CO2 levels is still a good measure of anthropogenic effects.

Let’s suppose that in the next 50 years there is a breakthrough in zero-carbon energy – say thorium or fusion reactors. CO2 emissions would begin to fall and so too would the balance between other GH gases and CO2. As far as I can see none of this is reflected in the RCP scenarios.

Ed Hawkins says that climate science is an observational science – like astronomy. That seems to be about right. However in astronomy observations are the drivers of progress – for example the discovery of pulsars, dark matter and dark energy. In climate science the modelers are in control and observations play second fiddle. A prime example of this is the definition of TCR.

4 Responses to Is TCR a measurable quantity?