The Met Office reports  that 2014 was the warmest year in the 354 year series of temperature measurements in central england. Ed Hawkins also has a post on this.

So is it true and what does it really mean?

CET annual mean temperatures since 1990 to 2014. The red line is a long term trend fit described below.

Well 2014 does indeed scrape through  above 2006 as the warmest year, but the quoted measurement error is 0.1C.  So statistically it would be more correct  to say that it is  60% probable that 2014 broke the record. However in this post I want to understand better the full time series and identify a  long term warming trend in CET.

This gives a rather different narrative than the simplistic one of just CO2 induced warming of the UK climate.

Full 354 year series of CET. A clear warming trend is evident over the entire period. There is little evidence of an acceleration of this trend after the industrial revolution. The red curve shows a linear fit to the data showing a net warming of 0.03C/decode

The data shows that there has definitely been a slow but continuous warming trend since 1660 until the present time beginning well before the industrial revolution. Furthermore there is no obvious evidence of any CO2 induced acceleration in warming as emissions increased post 195o.

So let’s do something a little different and calculate temperature anomalies relative to that long term trend instead of relative to 1961-1990. The result of this procedure is shown below

Relative to the 350 year long term trend there is no real evidence for any recent anthropogenic warming. Now let’s simply put a spline through the anomaly data to see if there are  shorter time scale trends.

There is indeed an apparent upturn after 1970 but nothing that is really remarkably different to that in the 1700s. This is then  followed by a downturn back to normal.

What could be the cause of the evident  slow long term warming trend? Most likely this is due to a recovery from the ‘little Ice Age”

During the so-called “little Ice Age” the Thames was regularly frozen and ice fairs held in winter. The Great Frost of 1683–84, the worst frost recorded in England,[3][4][5] the Thames was completely frozen for two months, with the ice reaching a thickness of 11 inches (28 cm) in London.

The last Ice Fair was held in 1841 because the climate was growing milder well before CO2 levels were of any concern. Since then the climate has become milder. Once  this natural warming trend is included , then the lack of a more  rapid acceleration post 1950 becomes evident.

The distribution of these anomalies results in a normal distribution about a mean of zero. Based on this definition of anomalies against a long term trend, the next plot shows the ranked warmest years in the full series. 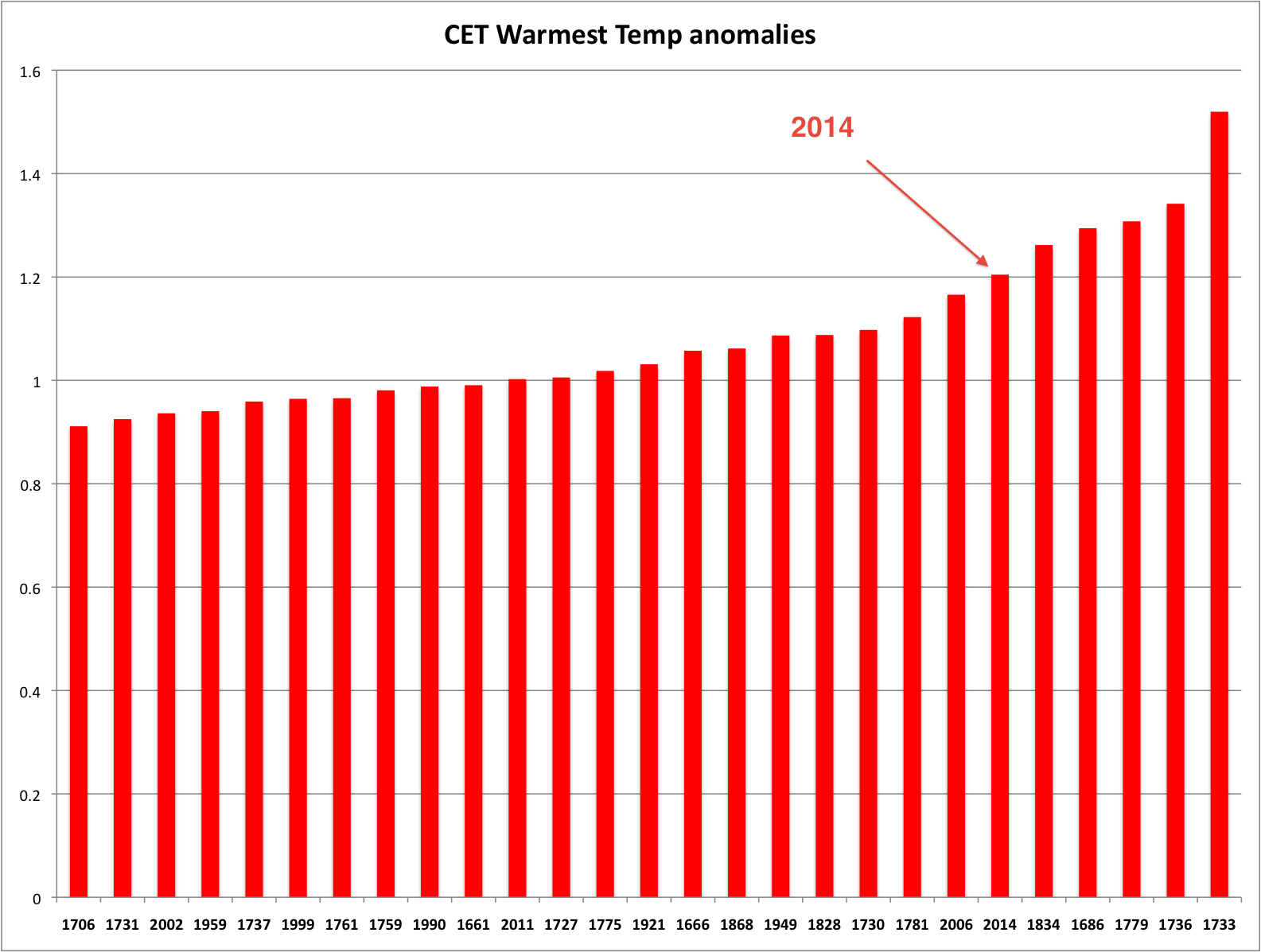 2014 is certainly way up there as an exceptionally warm year, but if natural climate trends are taken into account the average temperature is not exceptional. There is therefore  little hard evidence for an anthropogenic warming signal in CET.

I am convinced that enhanced CO2 levels must change the energy balance within the atmosphere so I would expect to see a first  order warming effect . However the complexities of the rest of the climate system on earth are still immense and still full of surprises.