The headlines used by most politicians and green pressure groups are based on the IPCC attribution of the human impact on the climate. Climate change policy and political soundbites can usually be traced back to the ‘Attribution statements’ contained in each of the 4 yearly asessment reports. The political pressure on scientists to forever increase their “certainty” about  man-made global warming is intense. The stumbling block is that the pause in warming since 1998 is getting harder to explain away and  is beginning to undermine this process. The more scientists try to explain the pause the more difficulties they find themselves getting into . The latest to make this mistake is Michael Mann who can now ‘explain’ the pause as being due to a natural cooling trend of the AMO/PDO since 2000, thereby masking underlying anthropogenic warming. 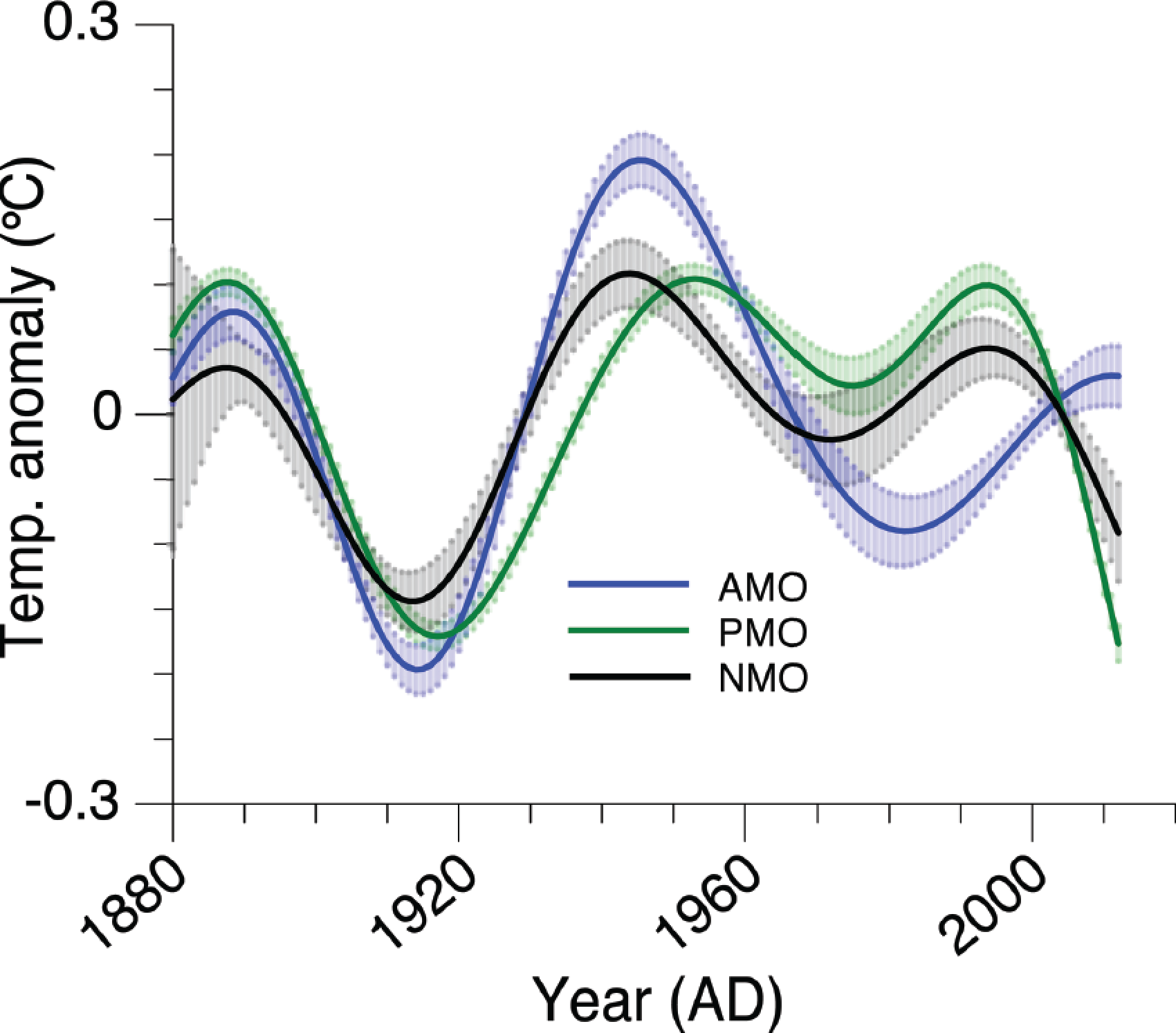 Mann’s identification of a natural oscillation component in global temperature data. NMO is a net combination of AMO and PDO. Note the amplitude of the oscillation is 0.4C

Mann is quite right that the PDO/AMO may likely be the cause of the hiatus, but by accepting this possibility he unfortunately  drives a coach and horses through the AR5 attribution analysis described in chapter 10. This is because the probability analysis used there depends on natural variability being precisely zero since 1951.

So 23 years of intense research has supposedly increased scientific consensus from an agnostic position (AR1), a discernable signal (AR2), through likely (66%-90%)  in AR3, to very likely (90-99%) in AR4, and finally to extremely likely (>99% certain) in AR5. This ratcheting up in scientific certainty, egged on by various pressure groups has underpinned the  increasing political pressure on worldwide governments to abandon fossil fuels. Taking a step backwards now is unthinkable.

However is this increased confidence actually justified in view of the fact there has been essentially no surface warming at all  since 1998?  The AR5 attribution analysis is all based on figure 10.5 shown below and the seemingly small error bar on the Anthropogenic component ANT. Despite the much higher uncertainty in the two individual anthropogenic components GHG and aerosols, the ‘fingerprinting’ analysis can supposedly isolate ANT with a high degree of certainty. This fingerpriniting is extremely obscure and is not at all well explained in the text of chapter 10. Even Science of Doom is not convinced by their arguments. However let’s be generous and assume that they are correct and the error on ANT can  indeed be shown to be that small. The real problem they now have is that the probability that ANT and Observed agree depends on the assumption that Internal Variability is 0.0 ± 0.1 C – but we just saw that this is now increasingly unlikely. 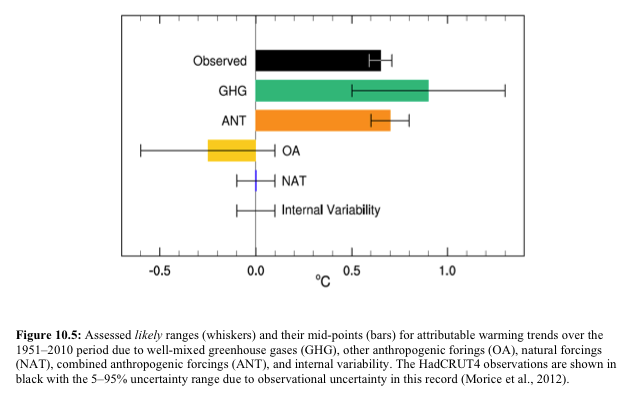 Invoking the AMO/PDO to explain the pause in global warming essenially means that Internal Variability can no longer be assumed to be zero. It must instead have a significant signal during the study period 1951-2010 used. Let’s look at how large that signal could  be. To do this we simply fit HADCRUT4 data to inculde a 60y AMO/PDO term. 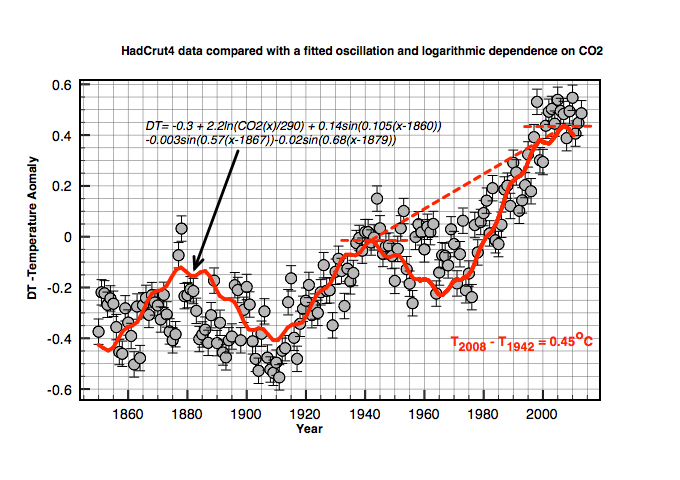 The ‘observed’ global warming content is then isolated by measuring the warming from one peak of the oscillation to the next peak, thereby removing the internal variability effect. Now the observed signal from 1951-2010 is reduced to 0.4 ±0.1C. Including the NMO oscillation now makes it clear that there remains a  net natural component to the warming  during the study period 1951-2010 of 0.2±0.1 C. The AR5 attribution analysis is therefore wrong and should be corrected accordingly. We do this by assigning 0.2C of the original ‘observed’ warming to Internal Variability. The new Fig 10.5 now looks as follows. 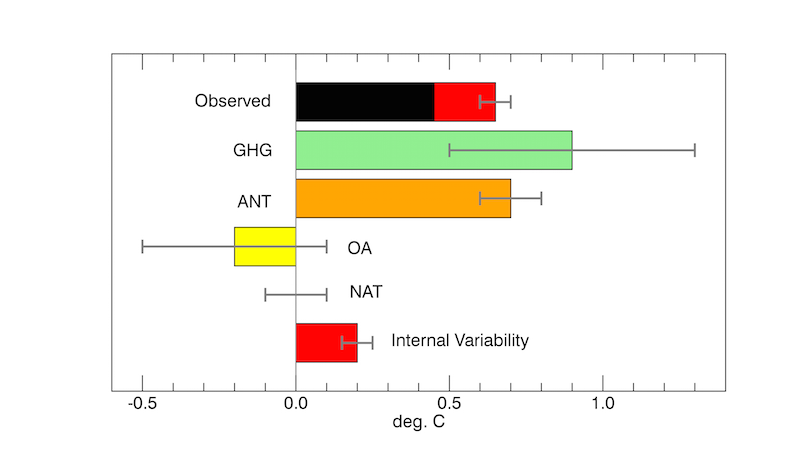 We see immediately that  the GHG component is now far too large and furthermore that the ‘fingerprint’ ANT component lies 2 sigma beyond the ‘observed’ global warming component. In order to explain the pause in warming Mann has had to accept the existance of a significant natural internal component. This then overturns the chapter 10 attribution analysis.

I am convinced that there is indeed a 6 decade long oscillation  in the temperature data which the IPCC  studiously avoided discussing in AR5. I think the main reason why was to avoid weakening  the headline attribution statement mainly for political reasons. This position is now becoming untenable. In fact chapter 9 which evaluates model performance essentially shows that there is only a 5% chance the models can explain the hiatus without including an  internal multidecadel oscillation.  In IPCC parlance this translates to : It is “extremely unlikely” that AR5 models alone can explain the hiatus in global warming (95% probability).