I must confess to not knowing very much at all about ENSO (El Niño Southern Oscillation), but while making the animations of Hadcrut4 I noticed some striking examples. Here for example is the ‘super’ el Nino of 1997/98. 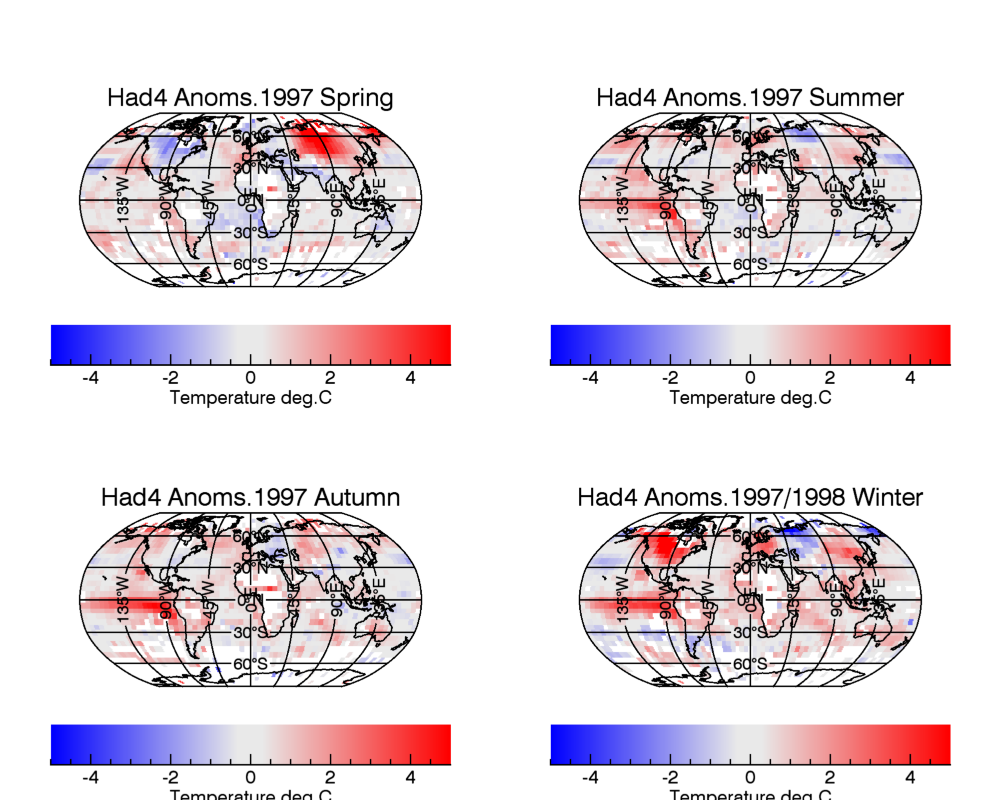 The strong El Niño which developed in second half of 1997 resulting in record temperatures in 1998. Also Note that in these maps that I am using a neutral light-grey colour for DT < ± 0.5C

Every 6-10 years an area of warm water appears off the coast of South America around autumn time with consequent effects on global  weather patterns. What is causing this ?

When I was a small boy I played a game in the bath of sloshing water backwards and forwards until it overflowed, much to the annoyance of my mother.  El Nino seems to be the same effect in the pacific ocean with the trades winds playing the role of the little boy.

el Nino. The easterly trades ‘slosh’ warm water up against indonesia. Eventually it sloshes back again.

Unfortunately that is not why El Niño means ‘Little boy’ in Spanish. It got this name because fishermen in Chile noticed that the warm water always seemed to appear before  Christmas – the birth of Christ – el Nino!

During normal (la Nina?) years the trade winds blow westerly causing  water to build up in the warmer western pacific. Gravity eventually sloshes this warm water back to the east which weakens the trade winds and the temperature equalizes, before the whole cycle repeats itself.  The net effect is a warming of the atmosphere and a temporary shifting  of evaporation/convection  zones.  Such events can be seen throughout the Hadcrut4 series and  el Nino always to begins to show in the Autumn normally lasting through the winter months. For example here is another  strong el Nino  seen during 1982 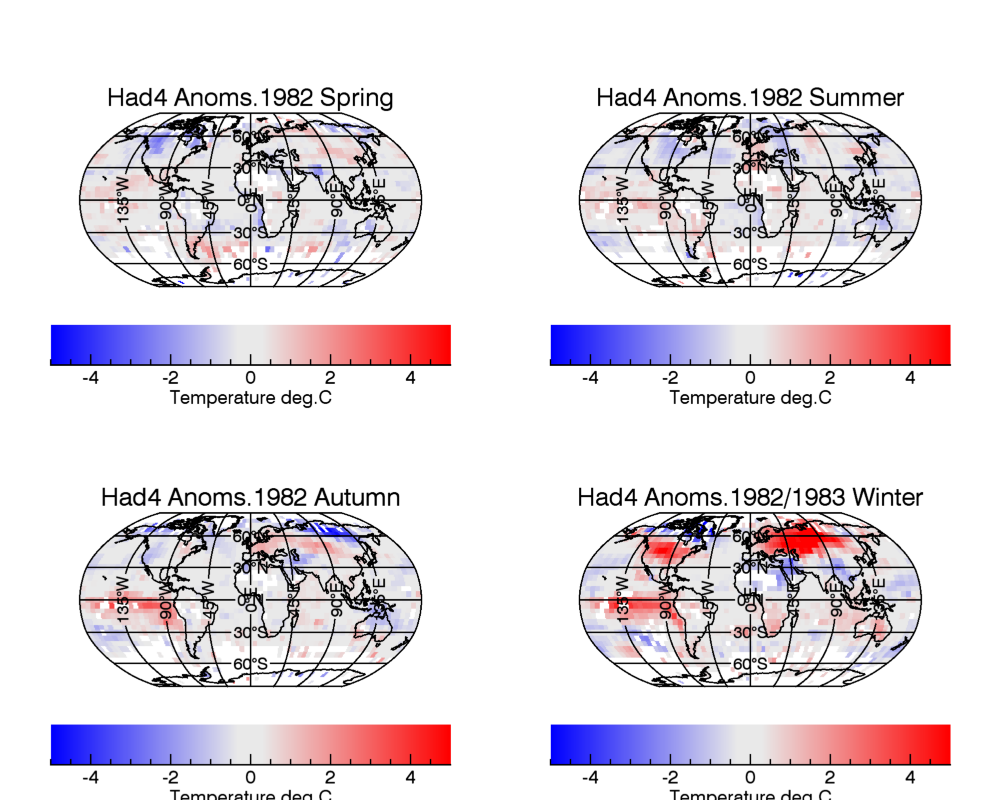 and further examples are seen in 1972 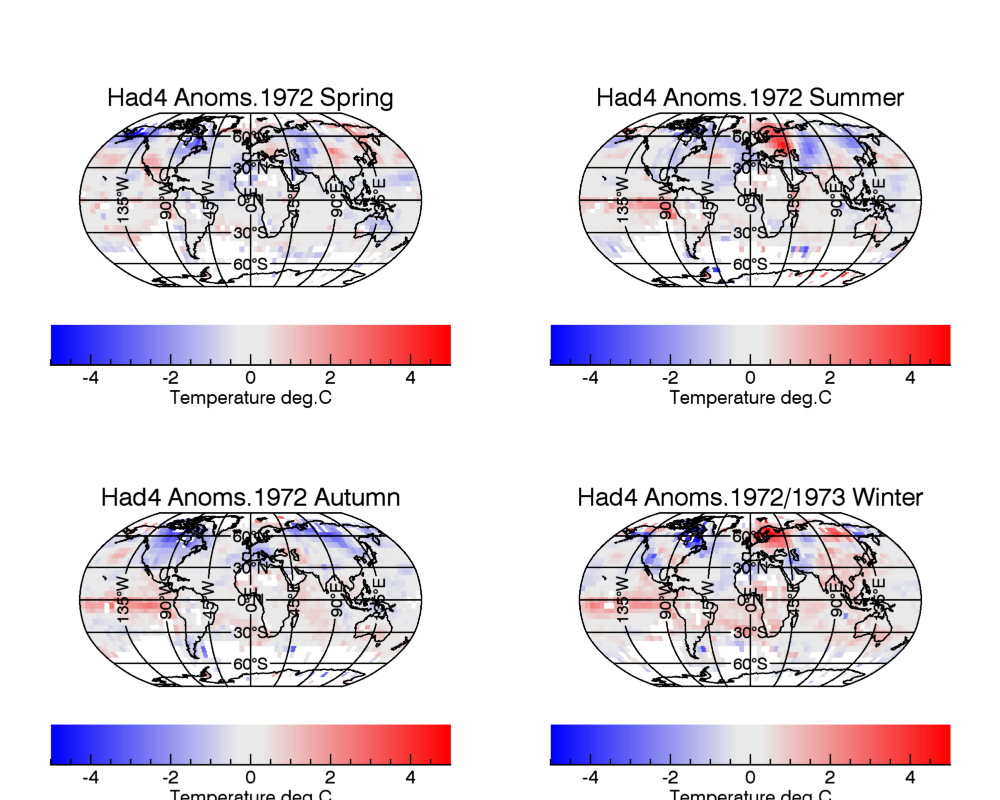 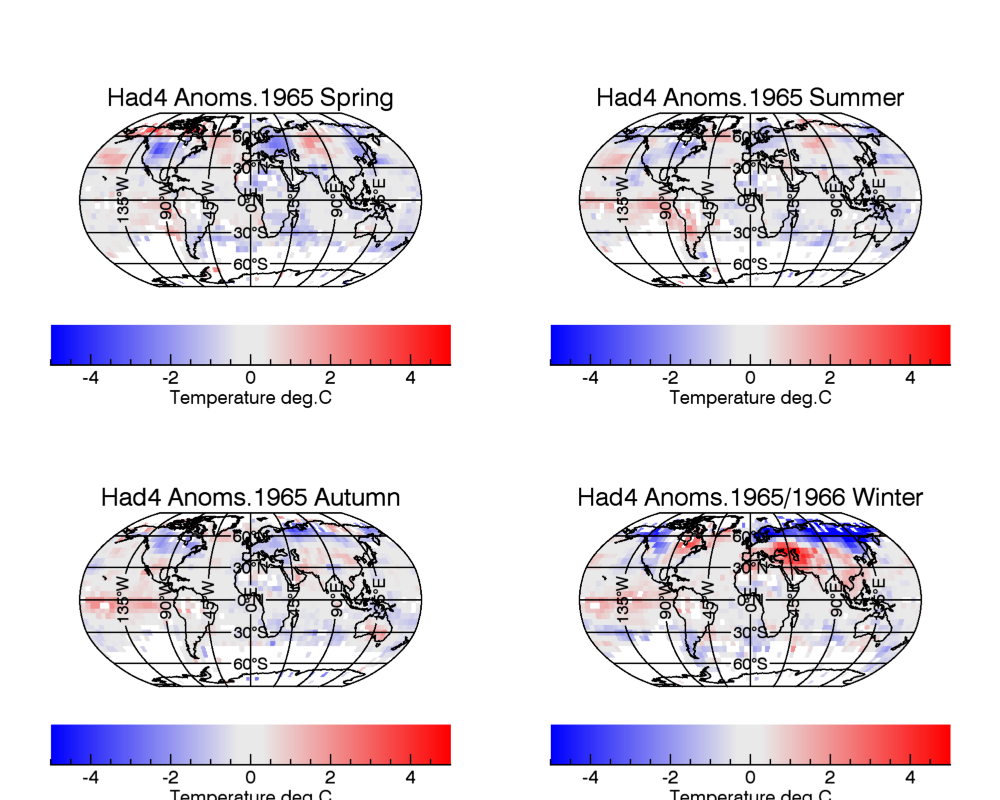 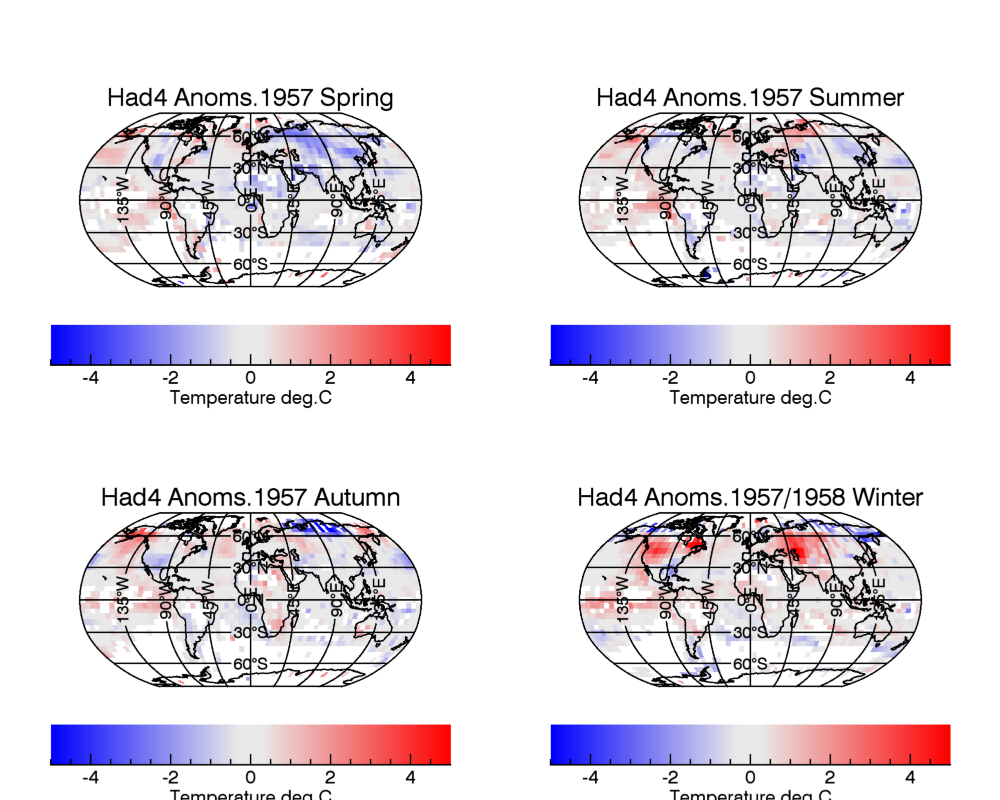 The earliest example I can find is in 1888/89 even though the SST measurements were then very sparse. 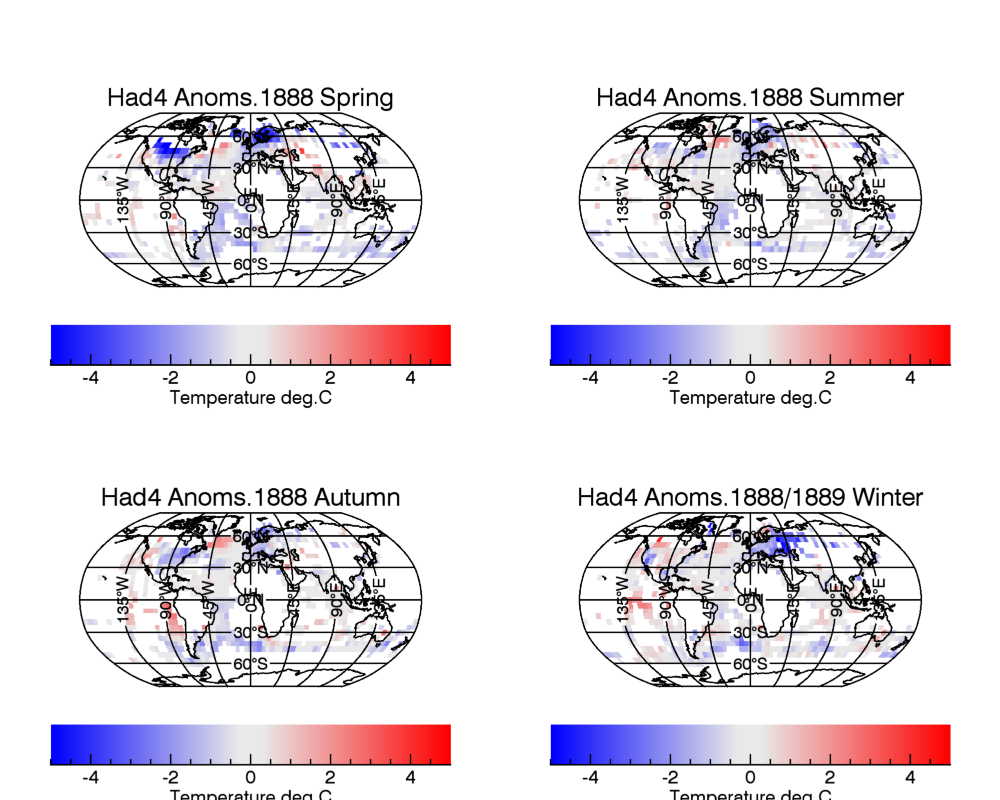 The fact that this last event from 127y ago is still visible in the sparse Hadcrut4 data is remarkable, but also says something rather subtle about the effective magnitude of global warming locally. The colours shown in all plots are relative to the normalised ’30y climate’ period 1961-1990, so any place showing red is actually warmer than the average temperatures 1961-1990 which is something like 100y after start of the industrial revolution. In 1980 CO2 levels were already 360 ppm yet clear past El Nino’s are still visible as red stripes in the pacific all the way back to 1870. This means that localized El Nino warming in the eastern pacific is far greater than anything produced so far by global warming. Likewise localised seasonal temperature variations in northern continents are larger than net warming as well, since otherwise there would be no red areas evident early on. 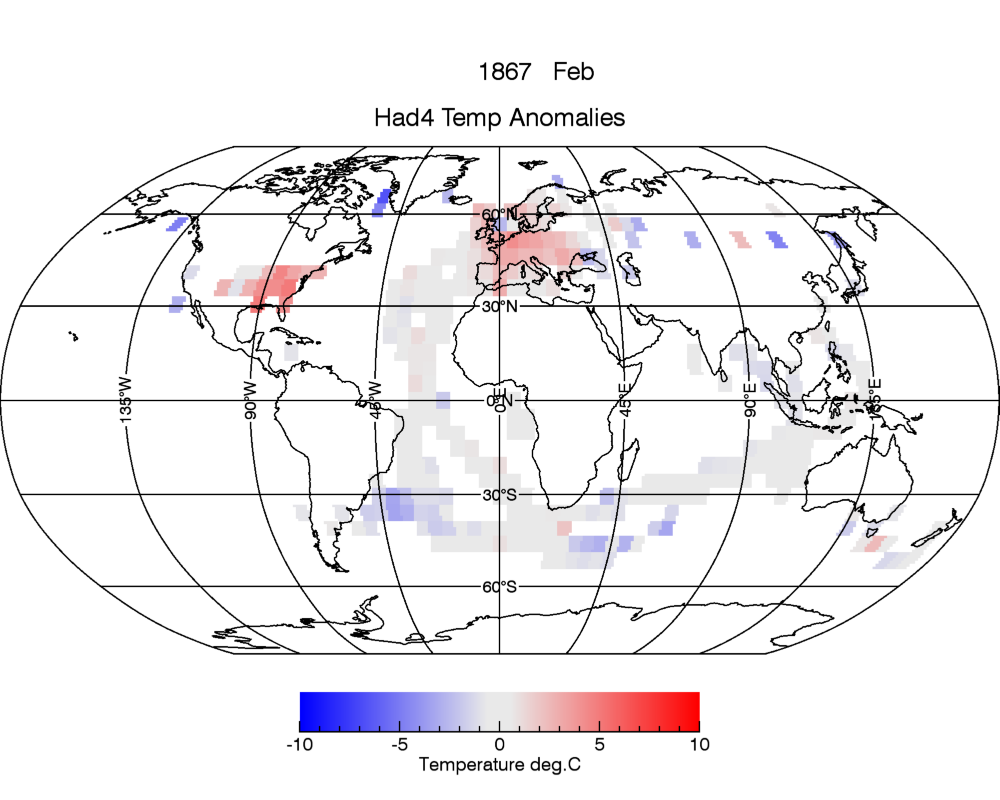 Temperature anomalies relative to the average February temperatures between 1961-1990.

The next 10 years should be interesting.