The National Snow and Ice Data Centre (NSIDIC) publishes the extent of daily Sea Ice coverage for both the Arctic and Antarctic. These are derived from  from meteorological satellite images. Often you see more alarming plots of  rapidly disappearing Sea Ice based instead on  ‘area’ , for example that produced by Cryosphere Today. The difference is that ‘area’ subtracts all surface pixels which identify from space as being water rather than ice inside a 25 km^2 grid cell. During  summer, ‘melt pools’ appear naturally on top of solid ice and as a result the area method treats these as open water, thereby exaggerating apparent ice loss. As NSIDC itself writes:

Scientists at NSIDC report extent because they are cautious about summertime values of ice concentration and area taken from satellite sensors. To the sensor, surface melt appears to be open water rather than water on top of sea ice. So, while reliable for measuring area most of the year, the microwave sensor is prone to underestimating the actual ice concentration and area when the surface is melting. To account for that potential inaccuracy, NSIDC scientists rely primarily on extent when analyzing melt-season conditions and reporting them to the public.

Therefore the temptation of those who want Arctic warming  to appear dramatic will tend to use area.  This realisation of this tendency only resulted after a twitter exchange with @GreatWhiteCon and his supporters. As a result I will use extent data from NSIDC for the rest of this post.   First lets see all the daily values of Ice extent since 1978

Daily Sea Ice extent from 1978. The Arctic is shown in dark blue and the Antarctic shown in light blue. The top graph shows the global balance (NH+SH)

Antarctica sea ice almost completely melts every summer, but gains a massive  ~ 15 million km^2 each winter. This is twice the seasonal range of the Arctic, where a core amount (5-7 million km^2) survives each summer as perennial ice. This perennial ice has been slowly reducing, but even today remains at about 5 million km^2. If you just look by eye at the trend then it should be another 30 years before the Arctic perhaps becomes Ice free in summer. The following graph now shows how the minimum annual global coverage which occurs around February each year has changed since 1979. 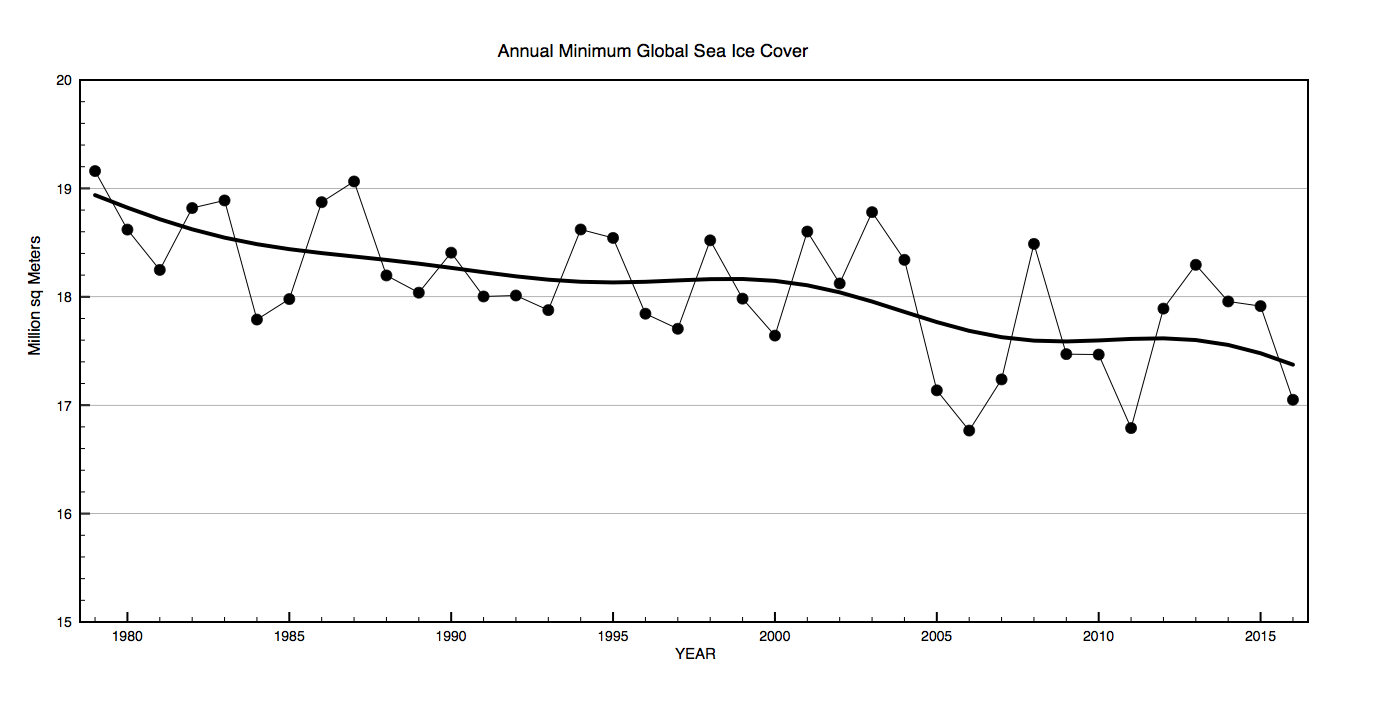 There has been a reduction of about 1.5 Million square kilometers globally. Next we look at the Sea Ice ‘anomalies’, which is the difference between the measured daily values and the average for each day as calculated from 1978 to 2010. The concept is similar to temperature anomalies and is intended to show changes in trends over time.

So the Arctic has lost around 1.6 million km^2 whereas Antarctica has gained about 1 million km^2. While a loss in sea ice is expected in climate models I am not aware of any which can realistically explain the sudden increase in Antarctica. Globally though the net result is a loss of around 0.6 million km^2. This must affect  the  radiative balance globally slightly on earth since ice has a much larger albedo than water.

The message is that the next time you see some scary graph of vanishing Arctic ice   always first check whether it refers to ‘Extent’ or ‘Area’. There  is a very large difference between the two!

Here below the Storify recording made by Jim Hunt.