Just when you thought it was safe to go out again and enjoy life a bit – forget it!  We will soon be hit by a climate catastrophe on a scale previously un-dreamed of. You and I, or our grandchildren, are going to have to pay the price  for our extravagant lifestyles. At least that is if you believe James Hanson et al.’s new paper.

A fundamentally different climate phase, a “Hyper-Anthropocene”, began in the latter half of the 18th century as improvements of the steam engine ushered in the industrial revolution (Hills, 1993) and exponential growth of fossil fuel use. Human-made climate forcings now overwhelm natural forcings. CO2, at 400 ppm in 2015, is off the scale. CO2 climate forcing is a reasonable approximation of the net human forcing, because forcing by other GHGs tends to offset negative human forcings, mainly aerosols (Myhre et al., 2013). Most of the CO2 growth occurred in the past several decades, and three-quarters of the ~ 1 deg.C global warming since 1850.
Our analysis paints a very different picture than IPCC (2013) for continuation of this Hyper-Anthropocene phase, if GHG emissions continue to grow. In that case, we conclude that multi-meter sea level rise would become practically unavoidable, probably within 50–150 years. Full shut- down of the North Atlantic Overturning Circulation would be likely within the next several decades in such a climate forcing scenario. Social disruption and economic consequences of such large sea level rise, and the attendant increases in storms and climate extremes, could be devastating. It is not difficult to imagine that conflicts arising from forced migrations and economic collapse might make the planet un- governable, threatening the fabric of civilization.

One of his arguments is the proposal that a sudden increase in sea level occurred at the end of the last inter-glacial – the Eemian. As a result they predict for us an exponential sea-level rise of several meters and Armageddon type  super-storms to hit us within the next few decades. You have been warned! 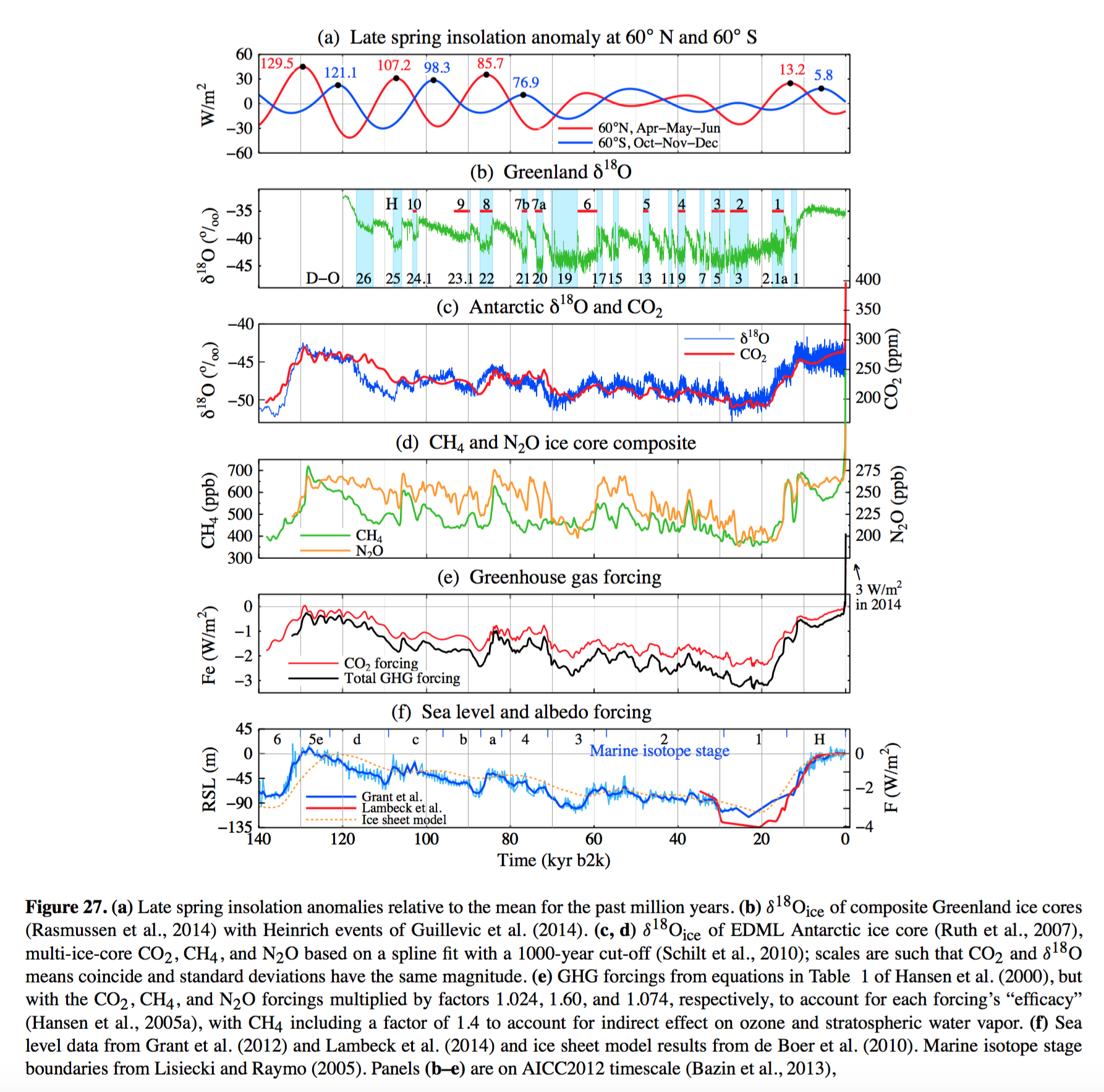 Note the vertical straight lines for CO2 at 0 !

The timing with summer insolation is not as good as it appears here since maxima occur about 6000 years later than those shown. Hansen’s argument is that the second southern peak in insolation shown in blue at 121.1 ky ago was enough to accelerate strong melting in Antarctica shutting down AMOC. A similar fate awaits us because we have increased CO2 forcing.

Warming in polar regions might be expected to reduce North Atlantic storms which are driven by strong meridional temperature gradients. Hansen’s argument though seems to be that excessive Greenland melt water will instead cool the North Atlantic, dampening the AMOC. Europe will get colder and storms will therefore get worse. That will serve us right for hoping that the future might bring barmy Mediterranean temperatures to Britain! Instead London will soon have to be abandoned as sea level rise accelerates, while our western coasts will be pounded by  super-storms with waves over 100ft high all within the next 50 years.

Oh and there’s nothing we can do about it either, because CO2 levels won’t fall enough over the next 1000 years to make any difference anyway. It’s all the fault of James Watt for inventing the steam engine.