Kevin Trenberth once claimed that the hiatus in warming from 1998 to 2014 was simply due to ‘missing’ heat being sequestered in the oceans. The annual global heat content to 700m indeed did show a rise, as estimated by measured temperature profile with depth. I have never looked at this NODC data until now.  Here  is a 3-monthly (JFM,AMJ,JJA,OND) animation of all the available data.

Firstly it is obvious that seasonal changes far outweigh any long term change. There are large regional variations near the equator dominated by El Nino La Nina cycles, while the poles show little net change over time. If we look at the first 3 months of 2016 (below) we see the massive shift of heat by El Nino and that a large cold spot has appeared in the North Atlantic. 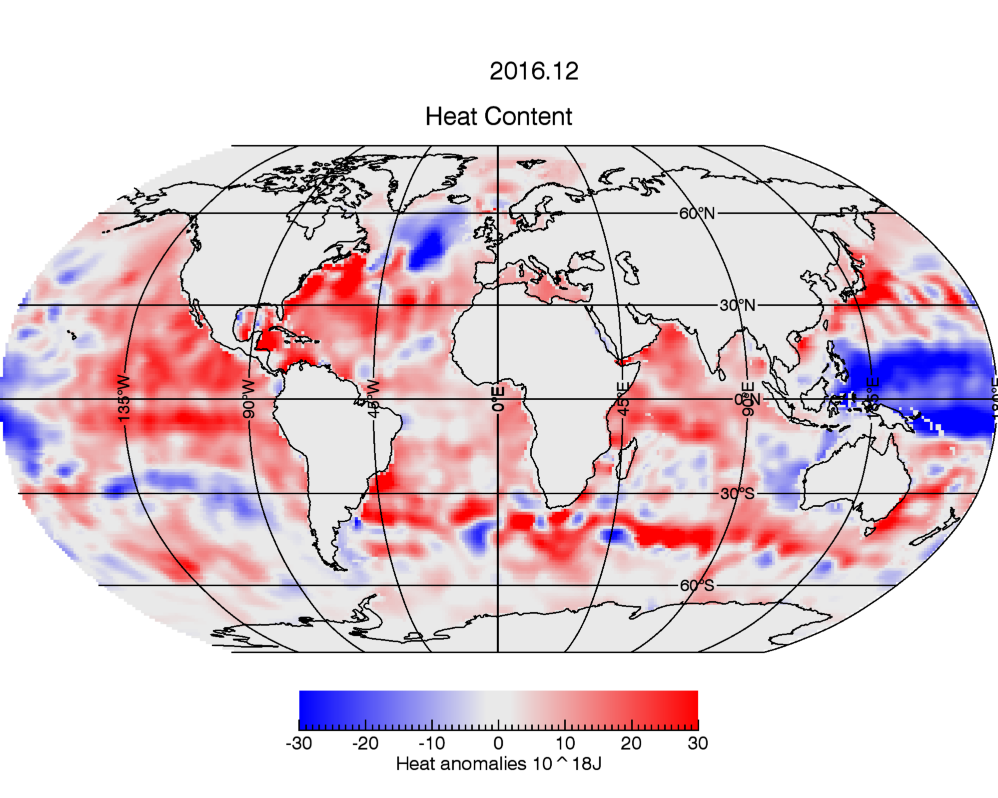 This cold spot in the North Atlantic has been highlighted by Ole Humlum through his climate4you reports. Is this perhaps something to do with AMO, and if so what is  driving it? Perhaps one answer lies with the precession cycle of the moon. Commenter ‘charplum’ (see The forgotten Milankovitz effect ) discovered an 18.6y signal in the Ocean Heat content data for the North Atlantic based on Humlum’s data.

Heat Anomaly for the North Atlantic region. Shown in red is charplum’s fit to harmonics which includes the 18.6y term with a correlation of 0.95. The red arrows show the dates for Maximum lunar standstills which occur each 18.6 years

Tidal tractional drag is felt at all depths in the ocean and therefore can affect heat mixing. The position of maximum spring tides depends on the declination of the moon. The maximum tidal drag force is centered at around 45 degrees to the lunar declination angle. This varies with the 18.6y precession cycle. Maximum lunar standstill of 28.5 degrees last occurred in June 2006 while the minimum lunar standstill of 18.5 degrees occurred last October. The data suggests that in the North Atlantic enhanced tidal mixing increases the net heat content contained in the top 700m, while reduced mixing at minimum declination leads to central cooling. 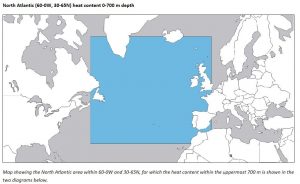 The UK sits right within the N. Atlantic study area used by Humlum, and its climate is dominated by westerly winds from the Atlantic. Could such tidal mixing be evident in the Central England temperature data? Again Charplum found evidence of a 18.6 year signal in the annual CET data. I plot below the data since 1750 with a superimposed precession signal.

Central England annual temperature data from 1750 to present. The long term average is ~9.5C. Deviations are shaded blue and the 5 year Fourier average is shown in red. The sine curve represents the lunar precession cycle.

It is always difficult to prove any effect when there are so many variables involved in a temperature series, including of course CO2. However it is tempting to associate just such a lunar signal in CET.