As requested by @richardbetts and @edhawkins here is a simple model to back up the arguments from the previous post – Stabilising Climate.

Now let’s assume that the world manages to stabilise annual emissions at current rates of 34 Gtons CO2/year  indefinitely.  CO2 sinks currently absorb roughly half of that figure – 17 Gtons and have been increasing proportional to the increase in partial pressure of CO2 in the atmosphere – currently that of 400ppm. Stabilising emissions now results in a decreasing fractional uptake by carbon sinks as the partial pressure imbalance between the surface and atmosphere begins to fall. The simplest assumption is that the sink increase depends only on the partial pressure difference for a given year. Therefore  if this pressure difference is reduced by half in one year then the next year it will be reduced by one quarter, then one eighth  and so on. The same argument applies for the case that it takes longer to reduce pressure difference by a half.

So in this simplest of models, CO2 levels in the atmosphere will  taper off after just ~10 years to reach a new long term value equivalent to adding an additional one year of emissions 34 Gtons of CO2 to the atmosphere. The atmosphere currently contains 3.13 x 10^12 tons of CO2 so the net increase at equilibrium would in this simple model be just   1%. Therefore for the years following 2016 the resultant CO2 curve would look like the red curve below. If instead it takes say 4 years for the sinks to increase  by

then we get the blue curve. In this case it would take 30 years for CO2 levels to to stabilise and the increase would be 5 times larger. 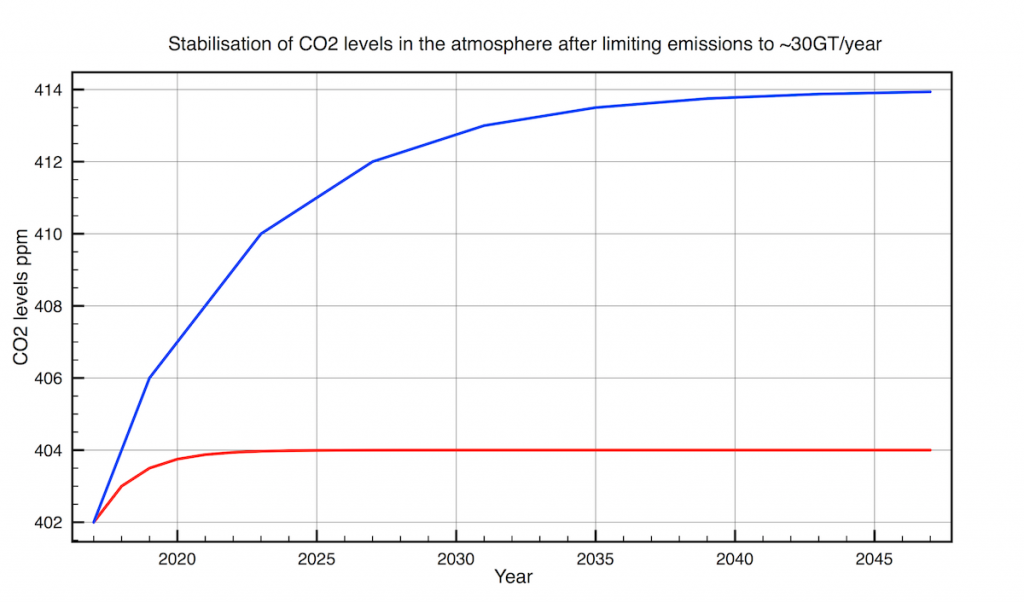 CO2 stabilisation curves for different time constants. The red curve assumes sinks match half the imbalance in 1 year while the blue matches it in 4 years.