Why is it that politicians and activists have siezed on just one of these issues, namely “climate change” and avoided others? For politicians Climate Change may seem to be actually a less controversial issue because it is  something conveniently external to their daily responsibilities. They can make broad pledges, statements and policies which they  will never  have to account for later  within  their short careers. Nor  does it impinge too strongly or directly on their constituents, as, for example, a new housing estate  might, but can even earn them the moral support of these constituents.
While it is true that modifying our lifestyles and adopting better energy policies and so-called green technologies can allay some of this environmental impact, it misses the real point.  Mankind’s impact on the environment is enormous and will keep increasing for one simple reason. There are just too many of us. Current world population growth is unsustainable at current rates and something is bound to happen sooner or later. One can argue that each Westerner has n-times  larger environmental impact than Africans but that still doesn’t alter the basic fact that development and better environmental practices can never succeed while population continues increasing at current rates. 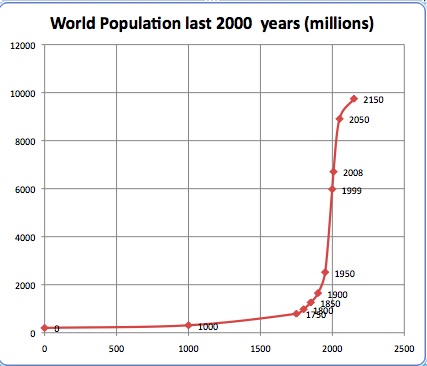 I was born in 1952 when the world’s population was about 2.5 billion. In 2009 the population reached nearly 7 billion. This means that there are more people younger than me alive today than people who have ever lived and died throughout human history. Put another way it means that the Earth must now support more humans than have ever lived on Earth since Homo Sapiens evolved. Mankind already deforested Europe for farmland by  medieval times. Imagine the impact of this many people on the Earth’s natural balance. This has nothing to do with how carbon neutral we are or how well we recycle waste. These are only side issues. Somehow, over the next 50 to 100 years, we have to curtail population growth. The real risk to mankind is not a couple of degrees rise in temperature but our own inability to control reproduction.

I would argue that the current fad of focusing  on Climate Change as the primary impact of man on the Earth is because we won’t face up to the real problem of controlling population. Politically this issue  is a minefield and no politician will discuss it because it necessarily breaches a number of correctness issues namely:

To date the only country with a successful population policy is China with its one child per family policy. China is often accused of not doing enough for CO2 emissions as its economic growth goes ahead unabated. However its biggest contribution to the Earth’s environment and to reducing CO2 emissions is by  stabilising its population at 1 billion. Recently the  environment minister who is a woman gave a speech at a climate  change meeting where she stated that this policy had stopped an extra 400 million Chinese being born who otherwise would have emitted 40% more CO2. Most people thought this argument offensive but it is still true.
Japan has also stabilised its population as it had to since it is an island and has little on no immigration. This seems to have happened consensually as women gained equal education and careers and so get married later. Similarly in European countries this was the case until recently, but immigration and higher birth rates are now reversing this trend with possible long term implications for society.
Birth rates in the UK seem to be rising, and according to the Office for National Statistics, there were 408,000 more people in Britain in 2008 than in 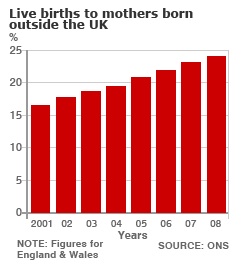 while women living here who were born abroad have about 2.5 children. A quarter of the babies were born to women who were born outside of the UK while direct immigration itself added about 120,000 people.  Other European countries are experiencing a similar effect with Switzerland increasing its population by 1.4% in just one year. Clearly European economies can sustain this increase in the short term but this issue will not go away and could become contentious in the long term.
There is no simple answer to population control as no-one wants an autocratic state to decide who has children and who doesn’t. Similarly it is only natural that immigrants will want to take great risks to find a better life if there is no hope left in their own countries. At some level we are all immigrants from somewhere else as very few indigenous people are left in any modern country. Most Britons were originally  from Saxony and the Netherlands and we all came from Africa originally.
Several countries, however, will not be able to sustain their increasing populations, so we need to start talking about these issues in a non-emotive way. Otherwise there will be serious problems ahead for the world. There are only two outcomes to this exponential rise in world population, because it is obvious that it has to stop  within the next 50-100 years. Either the birth rate must fall or the death rate must rise. The former option is by far the best one for all of us since the death rate can only rise  through  nasty disasters like disease outbreaks or through warfare. A UN conference on population control would be a good start, but will probably never happen for political and religious reasons. It is instead easier to hold conferences on the effects caused by ever increasing human populations rather than address head-on the core issue: how to control population growth.

This entry was posted in Climate Change and tagged population. Bookmark the permalink.