Suppose you wanted to measure whether the total number of ants on earth has been increasing. The number of ants at any given place depends on location and on season. Let’s assume that today there are 10,000 botanists at fixed locations across the world diligently measuring the number of  ants passing through each square meter. The daily average population at each location can then be estimated as  the sum of the maximum daytime population plus the minimum nighttime population divided by two. Unfortunately though  100y ago there were only 30 such botanists at work and they used pen and paper to record the data. How can we possibly hope to determine whether the global ant population has been increasing since then? The only way is to do that is to assume that changes  in ant population are the same everywhere because it is a global phenomenon – for example it depends on oxygen levels. Our botanists sample this change at random fixed places. Then as far as possible we should remove any spatial biases inherent in this ever changing historical sampling coverage. We can only do this by normalising at each location the population time series relative to its ‘average’ value within say a standardised  30 year (seasonal) average. Then we can subtract this normal value  to derive the ant population differentials (anomalies). Next  we form a ‘spatial’ average of all such disparate ant anomalies (essentially differentials) for each year in the series. What we can then deduce are annual global ant population ‘anomalies’ , but in doing so we have essentially giving up hope of ever knowing what the total number of ants alive on earth were at any given time. 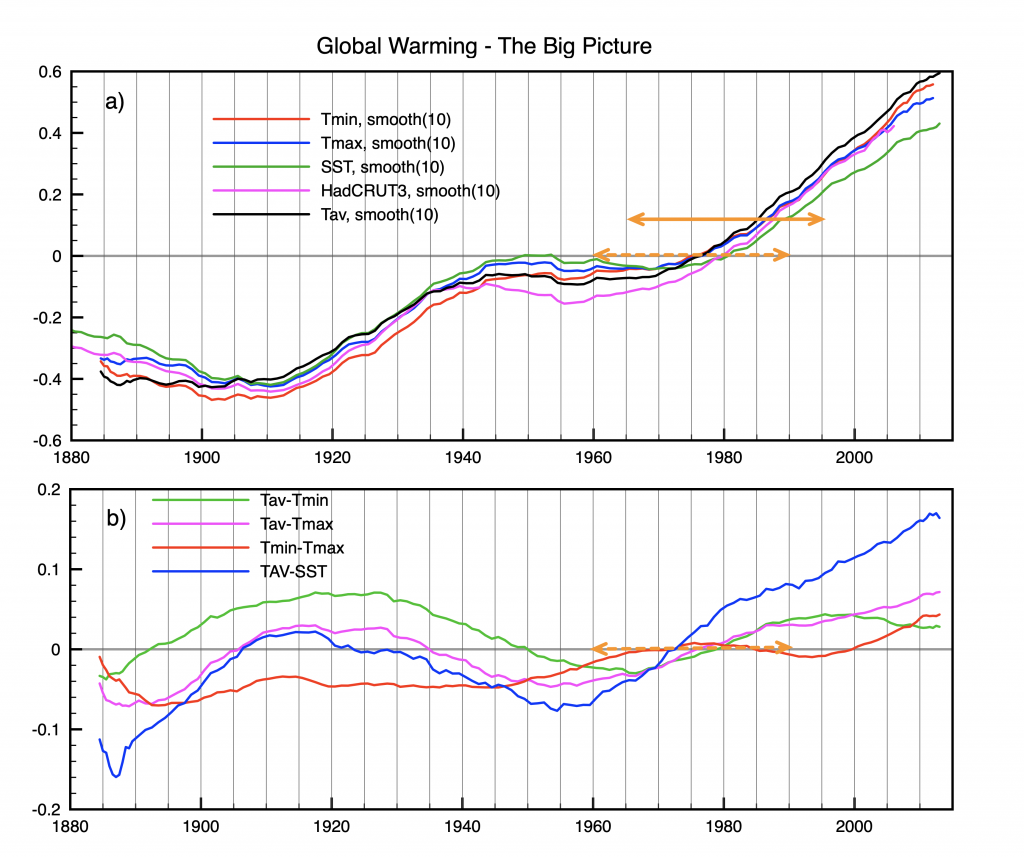 The individual station anomalies for Tav, Tmin and Tmax have each been computed using their respective seasonal averages between from 1961-1990. Note how all the series get zeroed together at the fixed normalisation period. This is an artefact of the choice of baseline period. We can also observe the following apparently odd effects in Figure 1b.

The zeroing effect in differences is again an  artefact of using temperature anomalies.  However, if one looks at these trends dispassionately one must conclude that there is an underlying  natural oceanic cycle of amplitude ~0.3C and wavelength ~90y which drove global temperatures until ~1930.  Since then a slow but increasing CO2 induced warming effect has emerged which has now distorted this natural cycle.  This has resulted  in an underlying  global warming of about 0.8C.

This entry was posted in AGW, Climate Change, climate science. Bookmark the permalink.