In this post I investigate what has changed in global temperatures moving from GHCN-V3 to GHCN-V4, and in particular why V4 gives higher temperatures than V3  after 2000. 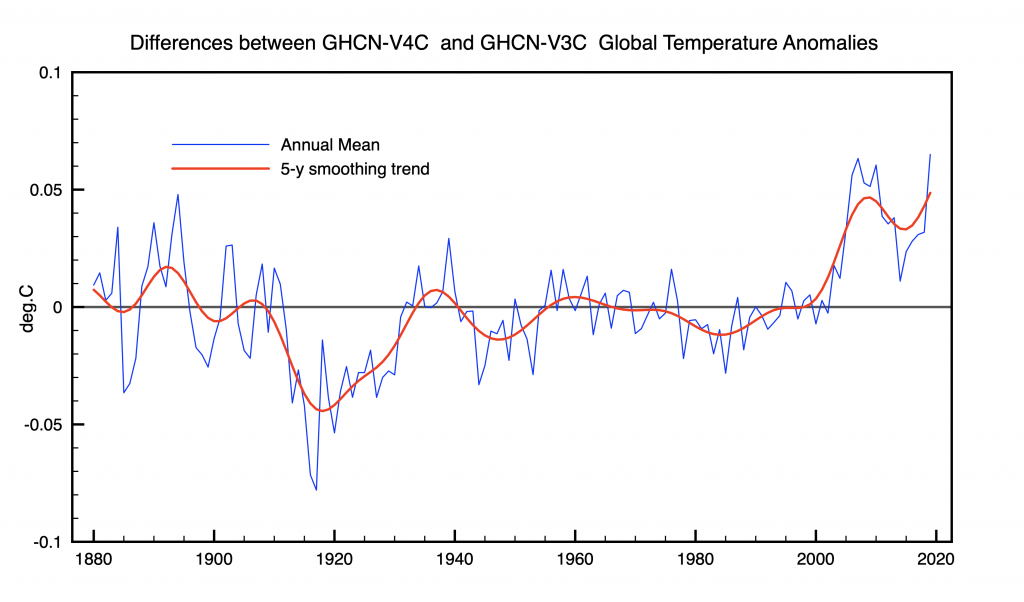 Significant increase in V4C global temperatures relative to V3C after 2000

Whenever a new temperature series is released it inevitably shows an increase in recent warming, forever edging closer to  CMIP5 models.   The Hiatus in warming as reported in AR5,  has now completely vanished following regular “updates” to the HadCRUT4 temperatures since 2012.  Simultaneously model predictions have been edging downwards through a process of “blending” them to better fit the data. Ocean surface temperature data are now joining in to play their part in this warming process. The new HADSST4 corrections produces ~0.1C more warming than HADSST3, and the main reason for this is simply a change in the definition of the measurement depth of floating buoys. No doubt a new HadCRUT5 is now in the pipeline to complete the job. Of course nature itself doesn’t care less about how we measure the global temperature,  and the climate remains what it is. It is just the ‘interpretation’ of measurement data that is changing with time and this process seems to always increase recent temperatures. The world is warming by 10ths of a degree overnight as each new iteration is published. Now I have discovered that the latest GHCN V4  station data is continuing this trend as identified in the previous post. I have looked more deeply into why.

GHCNV4 has far more stations (27410) than V3 (7280) but turns out to be a completely new independent dataset. It is not an evolution of V3 even though it is called V4. GHCNV4 is 85% based on GHCN-Daily which is an NCDC archive of daily weather station records from around the world. V4 has no direct ancestry to V3 at all. Even the station ID numbering has been radically changed from that used in V3, making it almost impossible to track down any changes in station measurement data between V3 and V4. Despite that, I decided  to dig down a bit further.

About a year ago I actually studied GHCN-Daily using a 3D icosahedral grid to integrate the daily anomalies into annual anomalies.  In the end I got almost exactly the same result as CRUTEM4 for recent years after 1950, which  also agreed with the then GCHN V3. That implies that the data were then aligned with the results of both CRU and V3C. So something else has changed since then when moving data from GHCN-Daily to GHCN-V4.

So how is it possible that now V4 shows significantly more warming than V3 after 2002, when a year ago GHCN-Daily did not? Have the underlying station data been “corrected” yet again since V3C? To investigate this I used a convoluted method to identify only the V3 stations buried inside the V4 inventory by using their WMO IDs mapped through the GHCN-Daily directory. This procedure identified about half of  the 7280 versions of V3 stations, bearing in mind that V4 contains 24710 stations! The other half are not primary WMO stations. I then used my standard Spherical Triangulation algorithm to calculate annual global temperatures based only on these 3500 V4 versions of  V3 stations. If the underlying station temperatures were  the same as those in V3C then they should produce the same results as those from V3C.  Do they?

The results  are shown below. 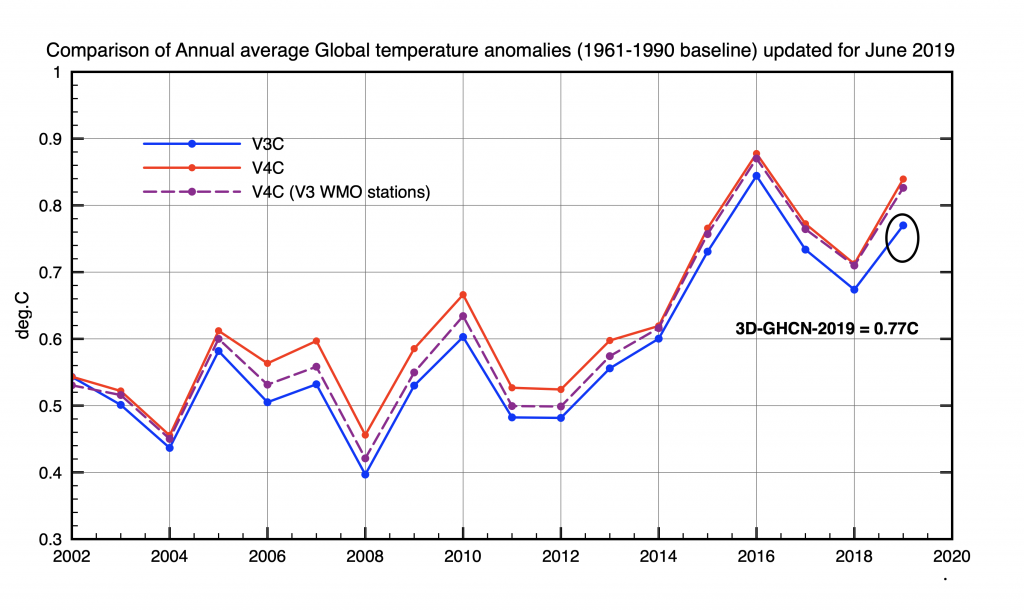 Annual temperature anomalies for the full V4C, V3C and a restricted version of V4C using the same stations as those in V3C

Perhaps even more striking is the monthly agreement between the full V4C result and the V4 result restricted to 3500 V3 stations. The agreement is remarkably good. It should be compared to the V4 versus V3 comparison in the previous post. 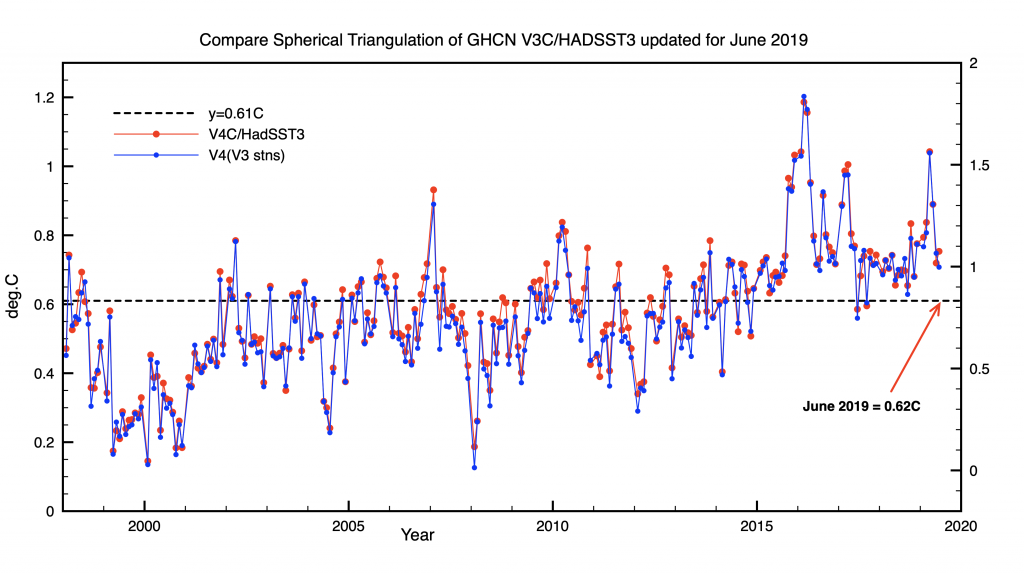 So the answer to the question is no they do not agree with V3.  This must mean that the V4 versions of V3 station data are indeed different to those in the original V3 station data. So it is these changes that have caused the apparent increase in warming since 2004. The graphs above  show  that they are almost identical to the full  station results from V4C. It is also not true that somehow V4  has greater coverage in the Arctic and this can explain the increased warming over V3. The reason is simply that the underlying data have somehow been changed.

You get a different results from V4 and V3 even using the same station data.

Nick Stokes has been looking into the same thing. He used V4 but then interpolated the V4 mesh nodes onto the V3 mesh for each  month, and then used the V3 mesh to calculate the global average. This can then compared to the standard V3. So he is using the same geometry as V3 but using all V4 stations, his idea being that it is the spatial distribution that matters not the underlying station data. He then found that V3 and V4 were indeed similar for the raw data (QCU) , but differed for the adjusted data (QCA). Since I had always used the adjusted data, I repeated the same analysis as described above using the raw (unadjusted) data for both V3 and V4 with identical stations. 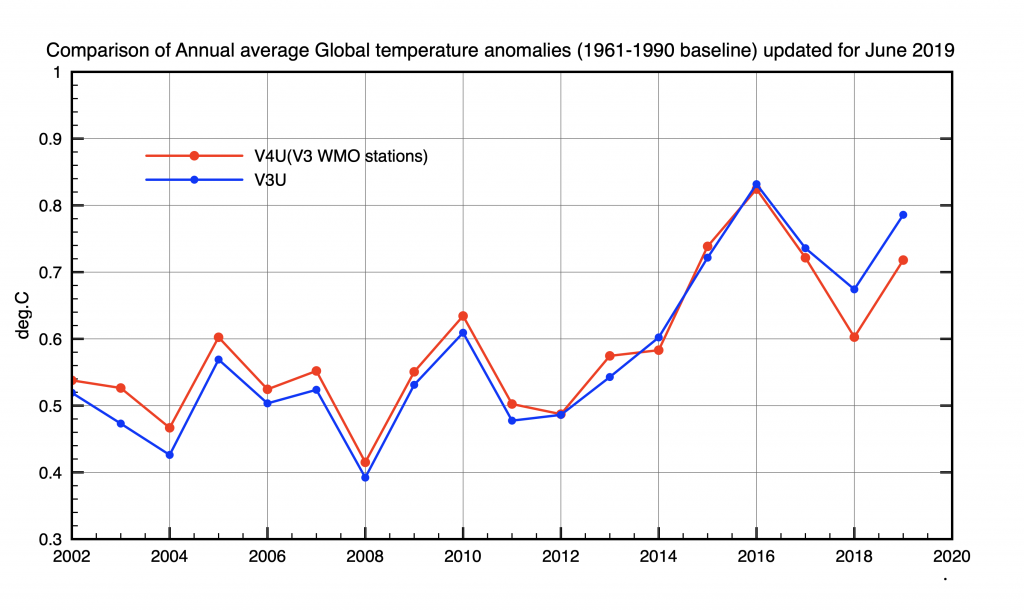 So Nick is correct. The raw V4 data gives more similar values to the V3 raw data when restricted to the same stations. It is the adjusted data that show V4 warmer than V3, and since the mesh geometry is the same in both cases, it must be the V4 homogenisation that produces more warming after 2002.

The raw data for identical stations in V3 and V4 are essentially the same, but become warmer in V4 than in V3 once “adjusted”.