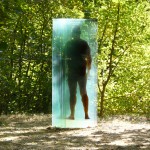 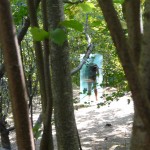 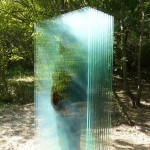 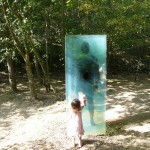 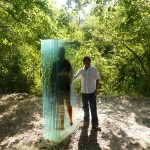 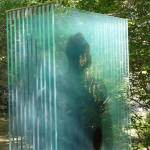 We have just spent most of the week helping install a new sculpture in Colletta. It is a fantastic work consisting of 12 reinforced glass panes each weighing 80 kg. The panes have been laminated with an amber section which together form a 3-D reconstruction of the sculptor’s father. The sculptor is Jonty Horwitz who is the winner of this year’s  Bernard Noble Sculpture prize. Jonty conceived the idea and defined  each slice in the work which reconstructs a 3-D lidar scan of his own father. The glass has been manufactured to extreme constraints by Michael Baron. It was delivered earlier by truck from Cheltenham to Colletta and I helped unload it and store it initially. This experience made me realise the very tough logistics of transporting and constructing the piece by hand to a lovely glade by the river below Colletta. Firstly a reinforced concrete base had to be sunk underground to hold a combined weight of 1 ton of glass. Giulio and GianPietro worked several days to get this ready.

This Tuesday Jonty and Michael arrived and we started carrying down the glass on Wednesday morning. One single slip or one single crack against the stone walls might have damaged the corners of the glass so it was rather stressful, but Giulio and GianPietro really had the muscle to make it work. They took each end as 2 extra men  walked the 200 metre steep path down to the glade. Then the whole of Thursday Jonty and Michael worked without a break, first to fix the base to the concrete, and then they built  a wooden rig  to exactly position the glass and then raise each one (with Giulio’s help) vertically spaced by exactly 13 cm. Finally the glass was secured with many layers of epoxy resin set into  the base. Epoxy resin reaches 150 degrees C while it fixes! On Friday morning the last layer of epoxy was set and the rig removed. As with everything there were a couple of problems as it became clear that the glass spacing needed to be fixed at the top as well. However the first sight of the sculpture standing alone was stunning.

Then on Saturday we had the official presentation of the work. Many of Jonty’s family had flown in specially for it and all present went down to see it for the first time. Overwhelming positive response! It is a stunning work which will surprise people when they come across it walking near Colletta.

This entry was posted in Colletta, Italy and tagged Add new tag, Colletta. Bookmark the permalink.