A recent post by Nick Stokes has started me thinking again about the use of 3D Icosahedral binning of temperature data. Their major advantage is that all bins are of equal size on the earth’s surface thereby removing artificial spatial biases, as demonstrated in Figure 1. This method when applied to HadCRUT4 in my opinion gives a more natural result than their standard (lat,lon) binning in 2D. especially at the poles..

Figure 1. A level 4 Icosahedral grid with 2562 nodes showing equal coverage over both poles. The data shown is HadCRUT4.6 averaged over all 12 months of 2017.

The final result gives almost the same as Cowtan & Way, but  without the need for any kriging into empty regions. It also agrees rather well with the spherical triangulation method, but also avoids its implicit triangular extrapolation across sparse regions. 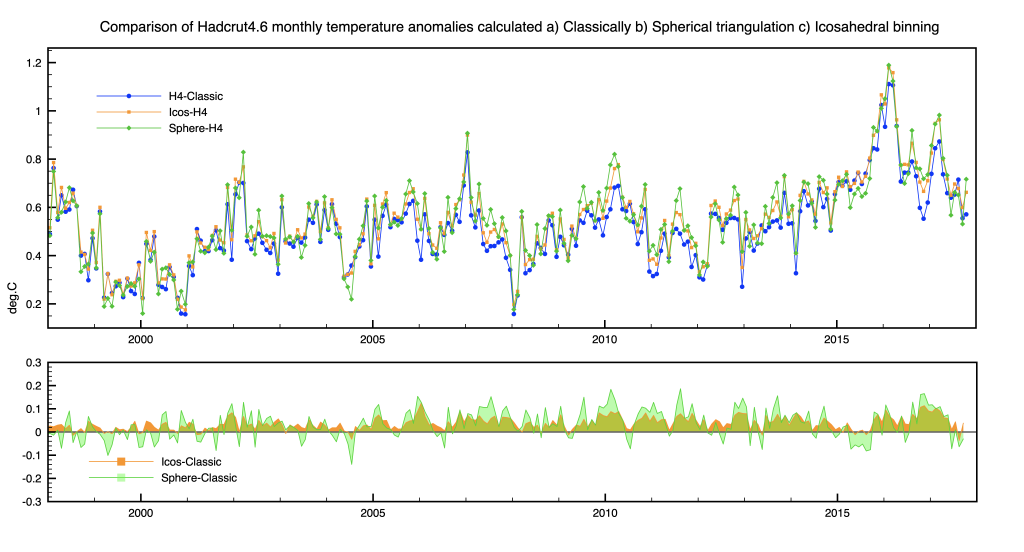 I have used Icosahedral binning to analyse GHCN-Daily as I couldn’t think of any other way top handle it. GHCN-Daily consists of 114,786 daily records of weather station data from around the world, the bulk of which are precipitation records. 27181 stations contain sufficient temperature data for normalisation. The monthly averages of these stations also form the bulk of GHCN-V4. The daily records however are the nearest we can get to the original raw measurement data. Each consists of a daily Tmax and Tmin value. I process them as follows.
1.Basic bins are a level 5 icosahedral grid with 10224 equilateral triangles. Each station is located within one triangle.
2. I calculate the 12 monthly average temperatures for Tmax, Tmin and Tav for each occupied triangle and all days in the month, using a baseline of 1961-1990. A minimum of 10 years worth of values are required.
3. I also calculate the offsets for each station relative to the overall average in each triangle. This is the difference between the cell average and the station average
4. Based on these results I calculate the average anomaly for each cell and for each month from 1761 to 2019. The station offsets ensure that the cell average anomaly corrects for changing station population with time. 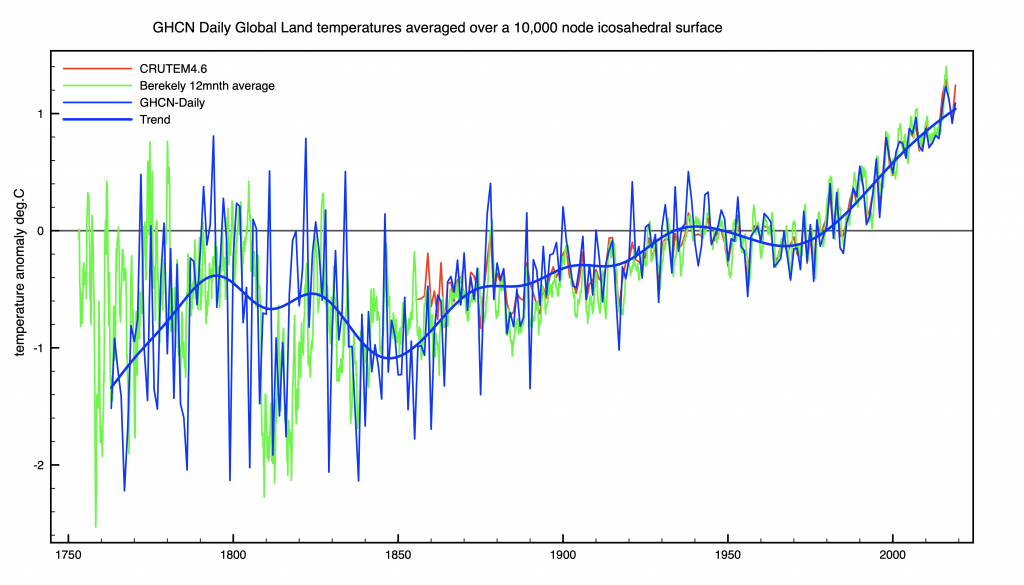 In general there is good agreement between all datasets although CRUTEM4 seems too warm around 1850 corresponding to the coolest period in both GCHN-Daily and BEST.  The sudden temperature drop in temperature around 1815 coincides with the eruption of Tambora – the largest in recorded history.

It is problematic estimating global averages temperatures much before 1850 because these tend to be just  Europe and US centric, with  a scattering of ex-colonial outposts elsewhere. Despite this it does appear that the 18th century was likely  ~ 0.5C cooler than the late 19th century.

Icosahedral binning is the optimum method for averaging temperatures anomalies which avoids fitting and extrapolation.

I can’t help feeling that HadCRUT should be looking into it.

This entry was posted in AGW, CRU, Hadley. Bookmark the permalink.