The Spanish influenza pandemic of 1918-19 infected about one third of the world’s human population (500 million people) at the time, killing perhaps 50 million people. It caused the worst ever death toll by an infectious disease in recorded human history, exceeding that of the “Black Death” plagues of the middle ages. The main wave of infection occurred over just a 10 week period from October to early December causing  80 % of the fatalities. All influenza A pandemics since that time (except human infection from avian viruses like H5N1) have been caused by descendants of the 1918 virus. Much information at the time was subsumed by the first world war effort, but in reality the pandemic killed far more people than did the hostilities. More US soldiers died from the flu than died in battle. 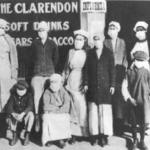 The flu was particularly cruel because, unlike all other pandemics before or since it hit mostly young healthy persons rather than the elderly or the very young. This age profile made the disease even more deadly as was reflected in a long term dip in the age distribution of populations . In many badly affected areas schools were closed, public activities suspended, and people wore face masks in an attempt to control the spread. 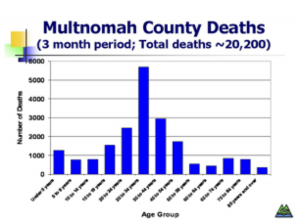 Spain was badly affected, and because there were no war restrictions the first news reports came from “Agencia Fabra” about a mystery deadly infection. This explains why the pandemic got the name Spanish influenza, although the Spanish themselves called it Naples or French Flu. Troop encampments along the war front were badly hit and the failure of the German offensive in 1918, perhaps eventually leading to their defeat has been blamed on the large numbers of soldiers incapacitated with the Flu. President Woodrow Wilson   caught the flu just before the Yalta negotiations and some people argue his illness  consequently clouded  judgment in  agreeing to the harsh war reparation terms proposed by the French. This then became one of the precursors to the second world war.

The Pandemic was unique prior or since as it swept the world in three waves separated by a few months. The first wave occurred in the spring and early summer, before the main wave in the autumn. A third wave occurred in early 1919 before essentially disappearing, but exact timings depended on location. Mass troop movements at the end of the First World War helped the spread around the world and every continent was consequently affected. 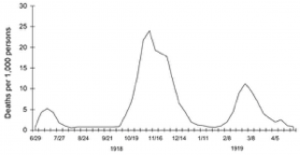 In 1998 the virus was reconstructed using lung tissue from soldiers preserved at the time or exhumed from permafrost in Alaska. Analysis showed that the Virus was H1N1 derived from an avian source. However, there was no precursor outbreak of avian flu in birds prior to the human outbreak. The pandemic came in three distinct waves. The first wave in the spring seems to have originated in Kansas US and spread via US army camps to France and then spread to civilian populations by July. The first wave was relatively mild, but somewhere in the late summer, perhaps in the overcrowded troop encampments in France the virus mutated and became much more deadly. A second wave appeared almost simultaneously across the world, being reintroduced back into the USA via Boston and New York, killing up to 50 million people worldwide from October to December. The H1N1 virus responsible was an avian-like virus, which was new to the human population. However all influenza pandemics since then have been caused by descendants of it and direct descendants still circulate in the pig population.

Where did it start?

There have been 3 proposals over the years.

The second deadly wave seems to have originated in France in late summer. It consequently returned to the US through ports (Boston and New York) and through the rail network. Simultaneously, it exploded all around the world due to regular troop movements especially to the then  British Empire. India was particularly badly affected with many millions dying. The three pandemic waves in one year remain unprecedented and still leaves many questions unanswered.  Sources: Barry & Taubenberger

How did it start?

Wild waterfowl which were collected by the Smithsonian Museum and preserved in Formaldehyde between 1916 and 1918 have been recently been studied (see: Journal of Virology, August 2002, p. 7860-7862). A bird from 1917 was found to be infected with a virus of the same haemagglutinin (ie. the “H” in H1 or H5) subtype as that of the 1918 pandemic virus. However researchers found that it was closer to the modern avian flu viruses than it was to the 1918 strain. This implies little drift (natural mutation) in avian sequences over the past 85 years and that the 1918 pandemic virus therefore did not acquire its HA directly from a bird.  But the farming community in Kansas (assuming it was the original source), raised many pigs, and pigs can be infected by both bird and human flu at the same time. Some experts believe that genetically stable flu viruses reside harmlessly in birds, but that occasionally one of these bird viruses consequently can infects pigs.  The swine immune system attacks the virus, forcing it to evolve genetically to survive.  If it then spreads to humans, the result could be devastating. Pigs can also be infected by both human and bird viruses simultaneously and it has also been proposed that a process called Viral Shift (interchange of one of the 8 RNA segments) between two separate viruses in a single cell could be the trigger. The host for this process could also be a person instead of a pig. Although much of this is still just speculation it does imply that birds are not the only threat.  Two interesting facts are that a) only during the second (and not the first) wave did pigs become sick, and b) people infected in the first spring wave were reportedly immune to the second.

It is thought that the natural host for the influenza virus is water birds. Roughly 6% of water fowl carry an influenza virus. Influenza is a zoonotic virus meaning that it can be transmitted from animal to human. The virus is spherical and contains 8 genetic RNA segments. These segments are translated into viral proteins by the host cell machinery. In some sense viruses are not really alive at all but are a disruptive free rider on living organisisms. The flu virus has a lipid membrane envelope containing  two proteins – haemagluttinen (HA)  and Nuramidase (N).  These have been classified into 16 types for H and 9 types for N. Thus H1N1 represents one combination and H5N1 another. Detailed genetics and geometry determining the fine details are determined by the 8 RNA segments. In humans it is the H proteins that attach to receptor proteins in living cells. Upon binding of the H protein to the cell surface the virus is internalised and RNA is released into the cell nucleus causing reproduction of new viral RNA. The figure below illustrates this process. 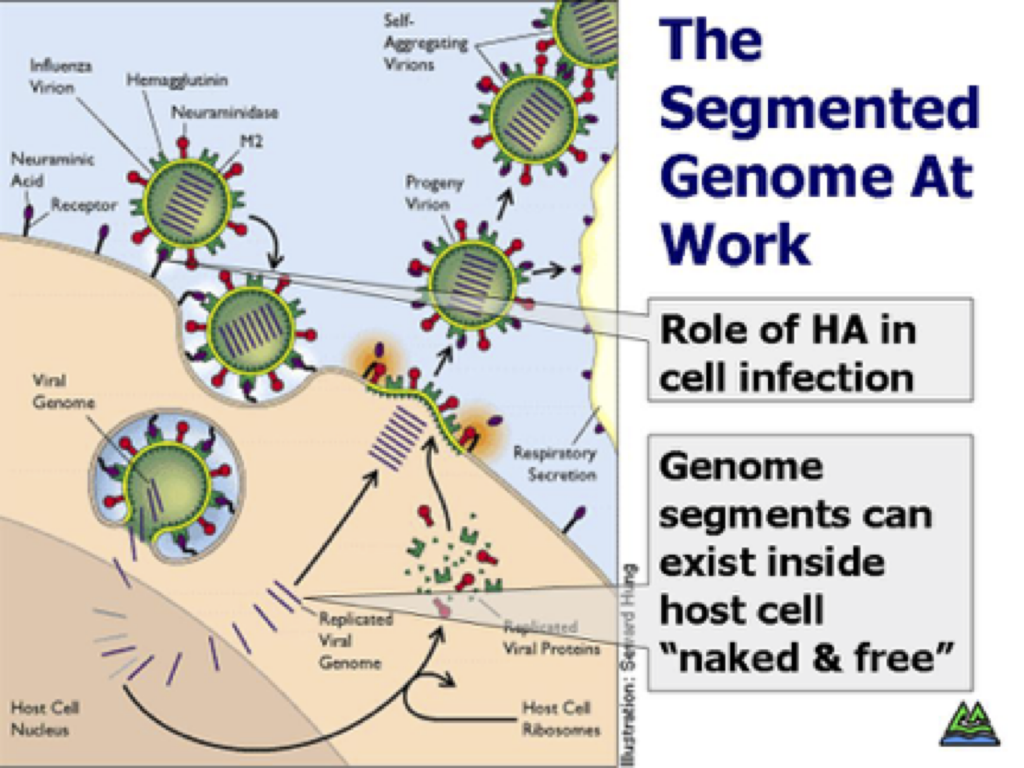 Viruses need water coated cells which can be the respiratory system, blood or reproductive system  to enter the body. Human contagious flu is always spread through water particles and deposits emitted by breath or through mouth contact with infected surfaces. Pandemics occur when a new viral strain adapts to human transmission and is new to the immune system. Eventually, however enough people build defensive antibodies to the virus that it either dies out or dilutes to a less virulent form. This is what happened in 1918 , although why the three waves occurred is still a mystery and could imply three different viral strains emerging each eventually being defeated by the “collective” immune system.

There are two ways that viruses evolve. The first way is called Viral drift. This is the process whereby when a virus is reproduced in a host cell the exact copying of the genetic code is prone to mistakes. This induces natural mutations which eventually can lead to modifications in the way the virus attaches itself and infects cells. This process is underway also with H5N1 as evidenced by the slightly different strains emerging from tests over the last couple of years. However such a process is unlikely to result in a dangerous mutation unleashing a sudden pandemic as happened in 1918. The second mechanism is called viral shift (or recombination). This is thought to occur when  two different viruses infect the same cell simultaneously and each release the 8 RNA segment together. Then on reproduction by the cell loose segments are swapped between the two viruses, resulting in a genetically new virus. There are 256 ways that a virus could swap a single segment with  another flu virus. If this exchange of RNA segments result in an HA section which can more easily attach to the human respiratory system and the virus is new to the human population then a potentially lethal pandemic could ensue. The host animal for such a viral shift could be a person or an animal such as a pig which can be infected both by avian and human flu viruses. The 1918 virus is an H1N1 type derived from an avian virus which either passed directly from bird to man or via pigs infected by both viruses simultaneously. Perhaps the first wave was transferred to man  through pigs and this later mutated in the troop encampments with close contact with poultry. This is pure speculation, but if virus samples could be recovered from the first wave scientists would be able to study this is more detail. The H1N1 viral samples so far recovered are from the second deadly wave.

Could it happen again?

Clearly a new deadly flu virus easily transmitted among humans could emerge again, but its effect is likely to be less than in 1918. There is a much better understanding of viral infections and the importance of quarantine, and surveillance. The situation is 1918 was special. There was a war going on with rapid flows of men between the front and their homelands, some in far reaching countries of the British Empire. There was also censorship of the news which avoided reporting the looming flu crises in the interests of maintaining national morale for the war effort. The situation in the encampments in France with high density living of young soldiers is not so different from high density poultry farms today. Disease spread rapidly among the troops and there had also been severe outbreaks of mumps and measles earlier. Little attempt was made to impose quarantines or restrictions on movement of people, especially since the war was also ending and celebrations were encouraged. Armistice day was November 17th where in some countries the flu pandemic was at its peak.   In Australia quarantining was properly imposed and this succeeded in limiting the outbreak rather well. Thus if such a pandemic were to appear in the coming years it is possible  that even despite modern air travel that:

However world population has more than doubled since 1918, and if measures to limit the spread failed then many 10s of millions could be killed by a virus of the same pathogenicity as 1918.

Note: I wrote this article in 2006 during the Avian Flu scare.

This entry was posted in Public Health and tagged Pandemic. Bookmark the permalink.

One Response to 1918 Flu Pandemic