We constantly hear at the UK daily Covid press conferences that we must keep R <1 to avoid a second wave of infections. Prof. Chris Witty warns us that if R goes above 1 then we will see an “exponential” increase in cases. However any second wave will depend critically on the exact value of R, because R  defines both the speed of the outbreak and the total number of infections needed before it naturally ends. This is  because it runs out of (an R -dependent)  pool of susceptible (i.e. non-infected) people. This finally results in so-called  “herd immunity”. Figure 1 shows  some examples of how the rate of infections develop in time and severity for different values of R.

Fig 1. Infections for different values of R0. (cases for UK)

The initial rise is not really “exponential” but a power series

is the number of infection cycles. This strong dependence on R suggests that one possible strategy would be to restart the UK economy after lockdown but just try to keep R slightly above 1 – say 1.1. This would minimise total deaths in the long run and eventually achieve herd immunity,  unless of course a vaccine can be found to achieve this sooner (see fig. 2). The value of R becomes a pay off between the length of an outbreak and its severity. Measuring R would depend  on widespread public testing. 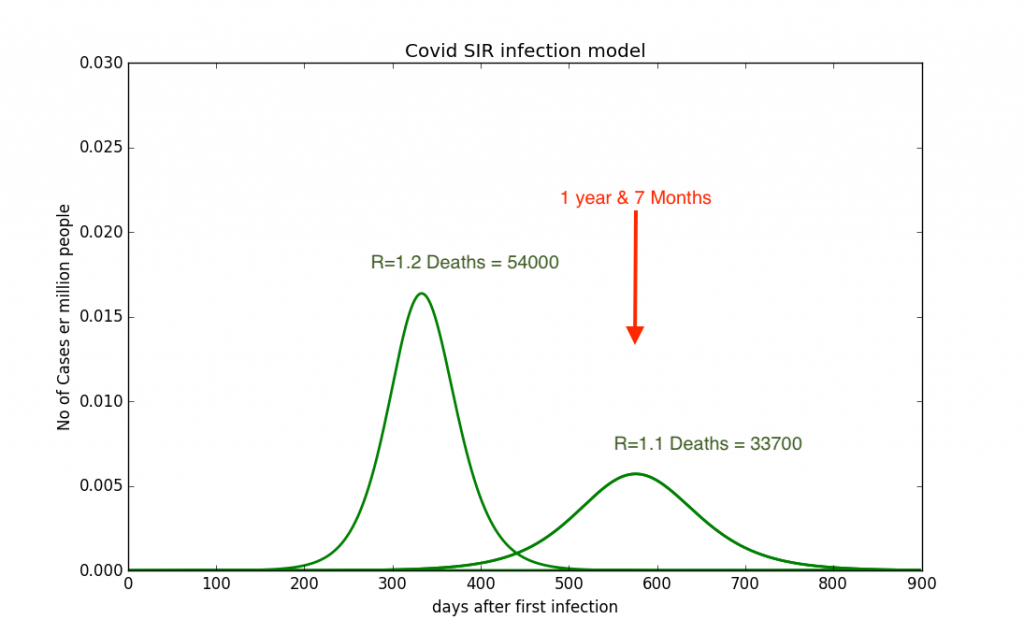 This strategy appears to be exactly that being adopted in Sweden, as explained by Professor Johan Giesecke in his lockdown TV interview. Sweden has adopted a limited social distancing policy but kept primary schools, bars  and restaurants open. They are planning for herd immunity while at the same time minimising deaths.

These are incredibly difficult decisions for any government to take. Apparently successful countries like Taiwan, New Zealand, Hong Kong and Iceland may succeed to eradicate Covid-19 entirely.  However afterwards they would still need to isolate themselves from the rest of the world indefinitely in order to stop any possible reinfection. This is unsustainable long term. The global economy depends on trade and international travel. Any resultant collapse in global living standards would likely then cause more deaths than the virus itself.

Let’s hope a vaccine appears as soon as possible!

13 Responses to The R value