At the beginning of March Neil Fergusson modelled the impending Covid-19 epidemic for the UK  which was expected to begin in early April and consequently reach a peak in May, all based on the infection rate assumed at that time. His influential “Report9” circulated and published on March 16 reflected these underlying assumptions. The lockdown measures that he proposed  to suppress infections and thereby allow the NHS to cope with the predicted surge in demand for ICU beds were also timed for April. There seems to have been a widespread belief in SAGE at the time that the UK was 3 to 4 weeks behind Italy, so consequently we had ample time to plan measures accordingly. We can now see that this simply wasn’t true and infections were spreading fast in early March. This was mainly because of open borders to Europe and a lack of testing capability. Figure 1 compares the recorded deaths in Italy, France and England as of June 16. 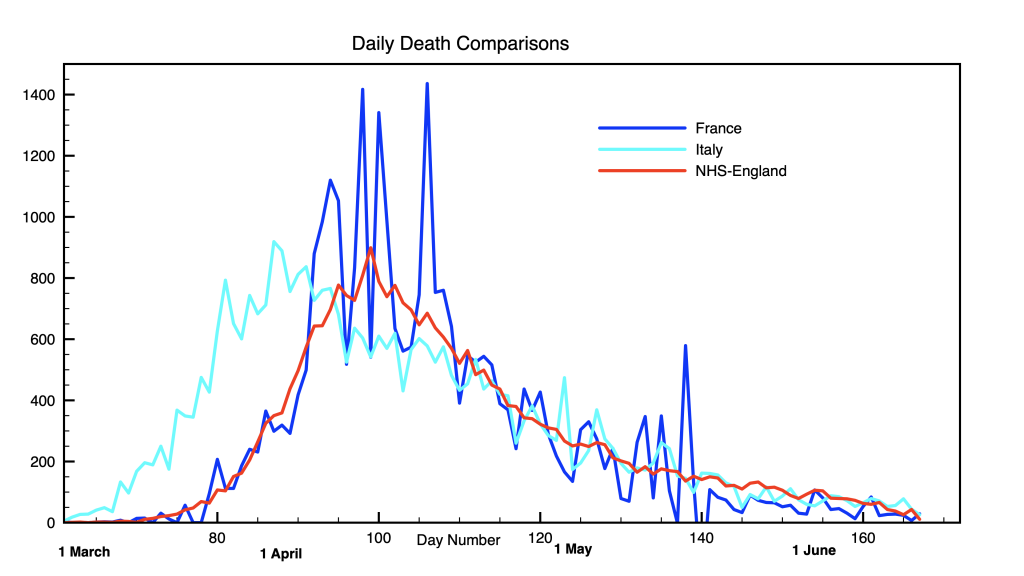 Figure 1. Daily recorded deaths in Italy, France and in NHS hospitals in England. Note the overall similarity between  England to France. The criteria for recorded deaths vary between countries. Here  I am just using hospital deaths registered by  day of death for England (population: 56 million)

In Figure 1.  I am plotting just the hospital deaths in England as recorded by the NHS because this probably best represents the dynamics of community wide infections. (The tragic deaths that have also occurred in care homes are another story!). Note how the epidemic begins simultaneously in England and France, both of which lag about 2 weeks behind Italy.  However by the end of April  all 3 countries then tail off together at almost the same rate ending together.  The Italian epidemic just seems to have lasted longer.

Ferguson originally released his code for “CovidSim” on GitHUB in May, together with the parameters files that describe the UK, updated to describe the emerging epidemic data. The unmitigated run he used on GitHUB show that he increased Ro to 3 because it was discovered that early UK infections were doubling every 3-4 days. His suppression  simulation was really based on the consequent  March 16 Household Quarantine (HQ) and limited Social Distancing (SD) measures as announced by Boris Johnson, then followed 7 days later on March 23rd by stringent Place Closures(PC). On March 23rd Boris Johnson announced that all pubs, restaurants,  shops, schools, Universities would close forthwith and that everyone should stay at home as far as possible.  March 23rd is therefore considered to be the real lockdown date for the UK, forgetting that a week earlier social distancing had already been already been introduced. As a result of all this the parameter file that Fergusson uses to simulate what really would happen during the UK epidemic is called PC7_CI_HQ_SD, where “PC7” symbolises the 7 day delay between March 19 and March 23 in implementing full lockdown.

Firstly we look at the unmitigated predictions. Figure 2 shows the  comparison between the original Report9 Neil Fergusson model predictions as made in early March with those from his updated May version. 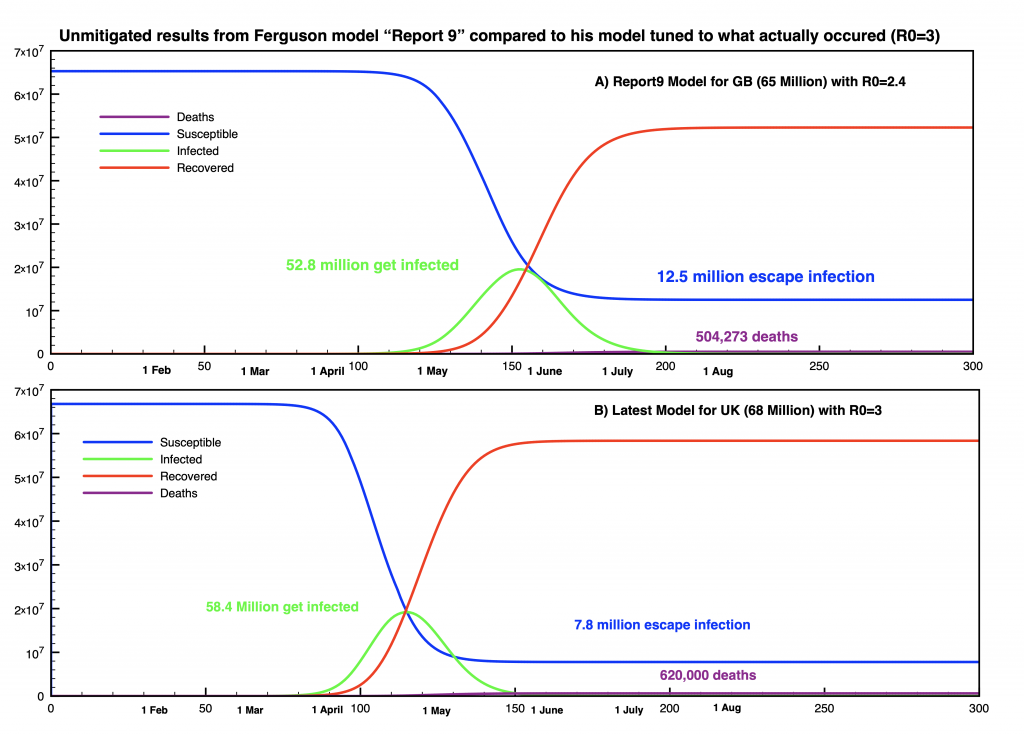 Figure 2. A direct comparison between Fergusson’s Report 9 simulation with R0=2.4 and the later UK simulation in May following the start of the outbreak.

The most striking feature here is the nearly one month anticipation of the real infection peak compared to the earlier Report9 simulations. Note also in passing that the original Report9  runs were made just for Great Britain and for some reason excluded Northern Ireland. This however can only explain a small proportion of the increase in  infections. The major reason for this increase was essentially due to using the observed increase in R0 to 3.0. SAGE were estimating that infections were doubling every 3 days.

Secondly we can compare the new May CovidSim “lockdown” simulations of deaths against the actual statistical data as recorded up to June 16th (Figure 3). I am using COVID-19 deaths as a measure of infection rates mainly  because these are the only consistent numbers across time. 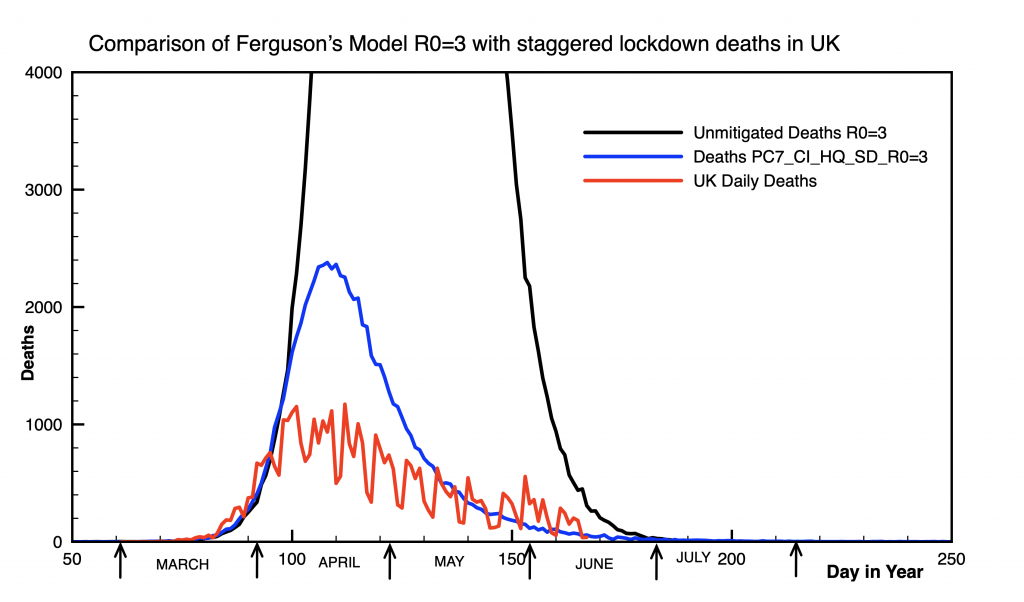 Figure 3. A comparison between the Ferguson model simulation of the UK lockdown with the actual death data vas recorded across the UK including Care Homes. The total unmitigated deaths reach 620,000. The recorded cumulative UK deaths were 41736 on 16 June.

The new model is clearly predicting more deaths than were actually recorded even if we now also include care home deaths.  These care home deaths were more a consequence of NHS lockdown measures rather than community infections as simulated by Fergusson. So what does all this mean ?

Ferguson had assumed an IFR (Infection Fatality Rate) of 0.9% and as a consequence his model predicted that 70,000 deaths would occur by June 16. In reality 41736 total deaths have occurred across all settings by then. It is likely that he calculated the infection rate correctly but simply used a too high value for IFR.

Therefore I would  conclude that IFR is  ~0.5%, and probably less than that once you exclude hot spots of infections such as those occurring  inside care homes.