The world has warmed on land by up to 1.5 C since pre-industrial times, but what does that really mean? Most people assume it means extreme temperatures  are increasing. However that is not the full story. The daily change in temperature from night to day we experience on  land is far higher than that from global warming. Scientists use temperature anomalies  to estimate climate change based on  whether any location has warmed relative to a standard 30 year normalisation period. All reference data (CRU, GHCN, BERKELEY) are based on the 12 monthly anomalies of  average temperatures (Tav) for each station,  where Tav = (Tmax+Tmin)/2 processed from the original station records.  The only source for these original raw weather station data that I know of  is GHCN Daily. This is a huge archive (33600 stations) of measurements dating back to 1750. Each station recorded  the maximum temperature and minimum temperature each day of operation. These also measure the diurnal temperature range because Tmin occurs at night and Tmax occurs around midday.

Robert Rhode from Berkeley Earth was the first person AFAIK to calculate global the Land temperature anomaly based solely on this daily data. I then repeated the calculation using  an icosahedral gridding method. First here are the Berkeley Earth Results. 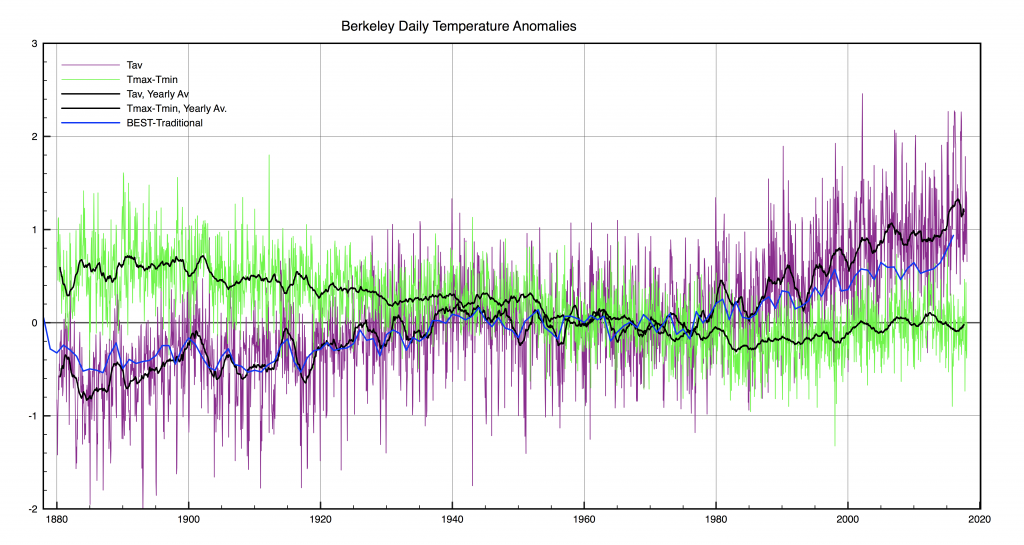 The reduction in the temperature range is clearly visible in the annual data. This becomes clearer if we plot annual avergaes 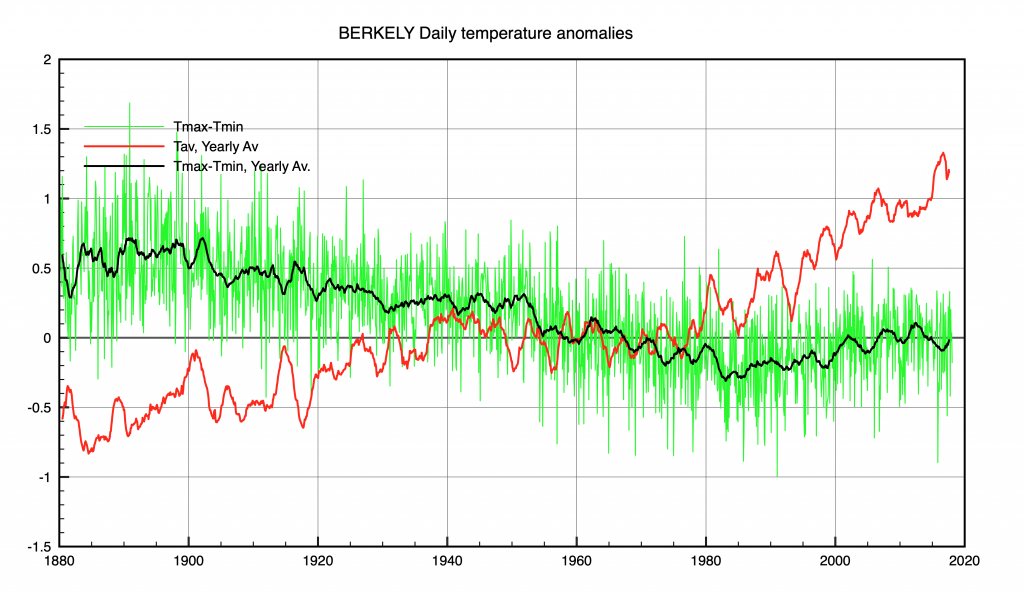 It is clear the the diurnal temperature range has decreased by about 0.6C since 1880. My analysis of GHCN Daily is described here. The next two  plots shows my independently calculated  result. 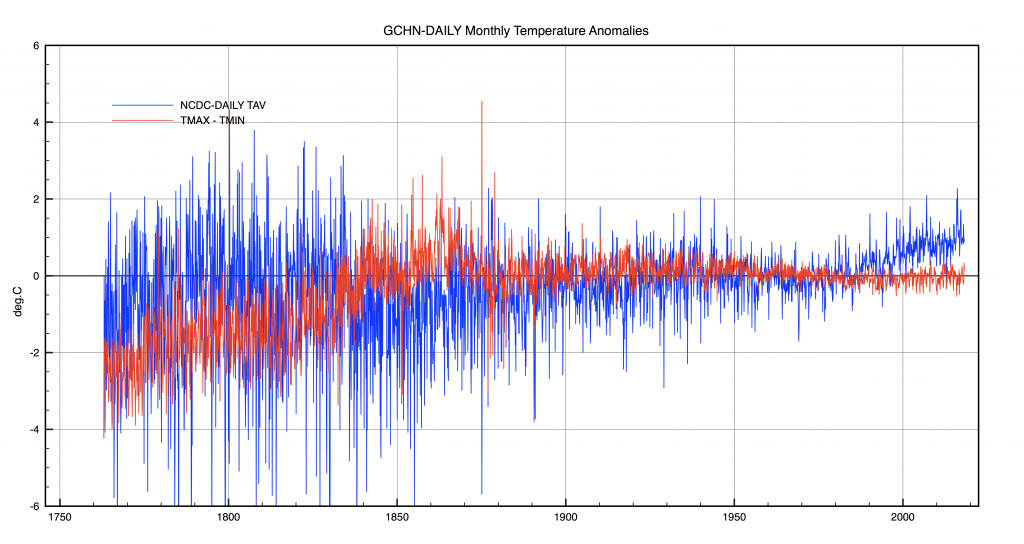 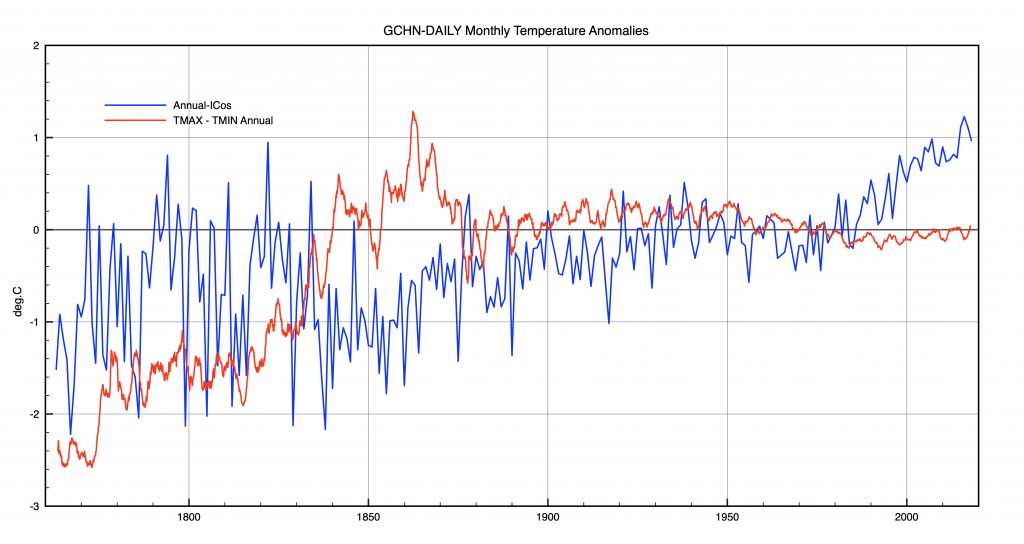 Again we see that Trange (TMax – TMin) has reduced significantly since 1880. The early data actually seem to show an increase prior to 1850 but stations data are sparse in this early period. I also find a reduction in Trange of about 0.6C since 1900. 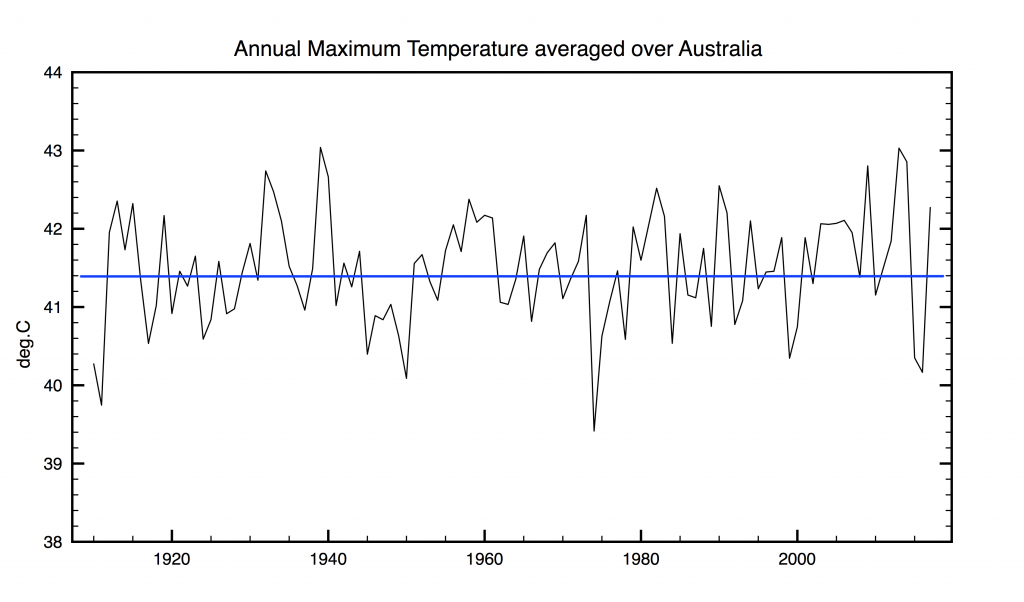 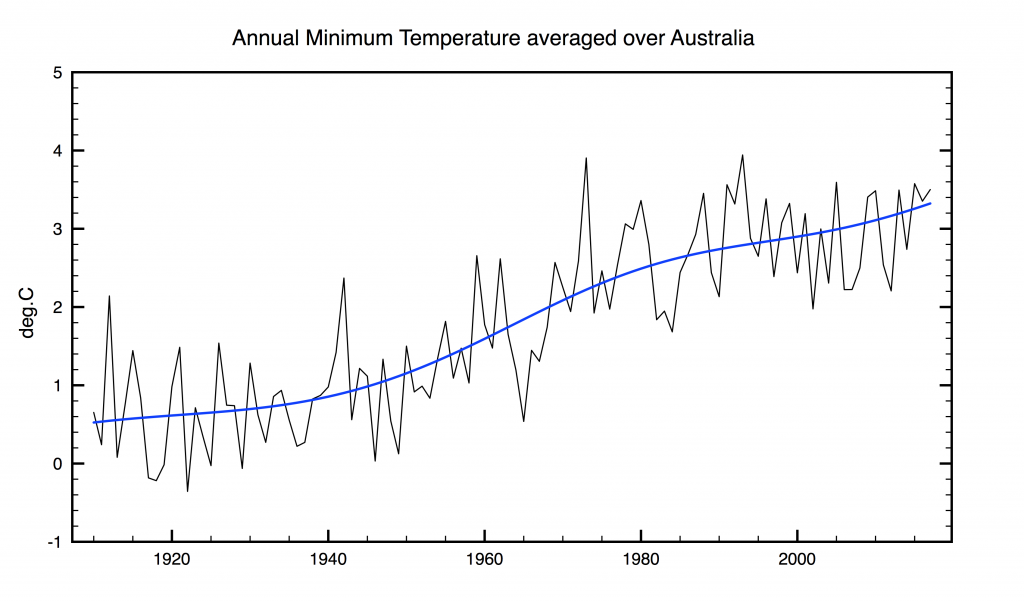 So in general the extreme maximum temperatures have not increased significantly in Australia whereas the coldest temperature (at night in winter) have.

All these examples essentially imply that 20th century warming has been mostly  occurring at night. Nights are warming faster than days. I think this can be explained as follows.

During the day the sun heats the surface which then cools mainly by convection through the troposphere up to where it can radiate to space. At night the inverse is true. Without any solar heating and clear skies, the surface cools until convection slows or stops and surface radiative cooling becomes more important. The surface cools as the radiation balance changes.  That is also how fog and ground frost occur. So increasing CO2 levels reduce radiative transfer to space more at night than it does during the day, when convection is more important. The increase in  the effective emission height affects both maximum and minimum temperatures but proportionally more so at night than during the day. This is illustrated below 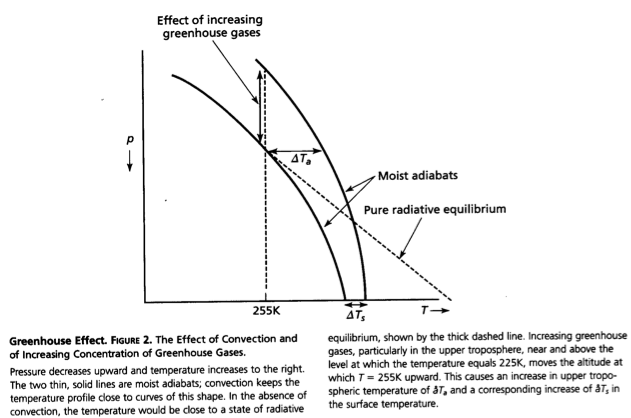