I recently heard a comment on BBC Radio 4 which compared the powerful Climate Change movement  to an inverted pyramid, because the arguments are based on just a few basic scientific measurements. The recent controversy regarding the leaked emails between the two main groups that provide global temperature data to the IPCC highlights how sensitive these core results really are. The two main people involved are Prof. Phil Jones who leads  the Climate Research Unit at the University of East Anglia and Michael Mann who is Professor at Penn State University and published the hockey stick data based on merging tree ring derived temperatures over thousands of years to CRU’s gobal data. This featured strongly in the IPCC 2001 reports and Al Gore’s film. The other famous Hockey stick shows a rise in CO2 levels since the industrial revolution following apparently steady levels over thousands of years derived from Ice cores. Taken together these two hockey stick graphs purport to show that there is overwhelming evidence that human emissions of CO2 are driving up global temperatures.

The scientific evidence for human induced climate changed is based on 3 main pillars:

1. Global temperatures are rising since the industrial revolution and particulary in recent decades. It is assumed this rise is due to increases in man made greenhouse gases particularly CO2

2. CO2 measurements at Maona Loa and elsewhere clearly show that CO2 concetrations are increasing caused by fossil fuel emmissions. CO2 is the most important anthropgenic greenhouse gas and drives the climate.

3. Global Circulation models predict a rise in temperaturs of between 1-6 degrees by the end of this century. These models have many unknown parameters. The predictions depend on these  parameters being  fined tuned to agree with the above temperature trends.

So lets look at these one by one.

1. Is it really beyond doubt that global temperatures have risen in recent decades? Mann’s graph would appear to make this clear. However his analysis is  based just on only one long term source for historic temperatures namely tree ring data. It ignores other historical measurements or derived data including estimates of falls during  the little Ice Age, rises during the the Warm Roman period. The flat tree ring data  are merged with the CRU/Hadley with the  (now challenged) global tempretature data for the last 20 years. 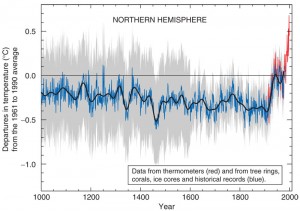 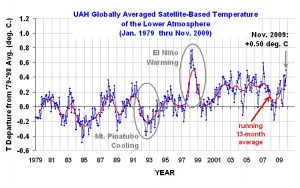 The hockey stick relies on the tree data to give the impression of a long flat and stable climate. Many reputable scientists think however that the climate was not that stable over the last thousand years. In particular the little Ice Age and the medieval warm periods with reports of Romans growing wine in York etc. Michael Manns hockey stick graph succeeds in eliminating both these periods. Did they really exist or  have they been deliberately suppressed in order to have a bigger political impact ? Tempretaure measurements using isotope concentrations in Ice cores in Greenland show detail of temperatures back to the last Ice age and support the historic evidence of medieval warm period and the little Ice Age.

The second graph above shows satellite global average temperatures of the earth’s near surface based on thermal microwave emission of oxygen. Note that the excessive rise recently is not apparent, but fine details like  the cooling during Mount Pinatoubo erruptions show up nicely.  This graph does not support the accentuated  hockey stick effect.

2. CO2 emissions. Data from Maona Loa and elsewhere show that CO2 concentrations have been rising since the 1950s. They are currently around 380 ppm having risen steadily from 316 ppm in 1959.  This is actually still a tiny number as it represents just 38 molecules of CO2 in every 100,000 molecules of air. On average there are 100 times more H2O molecules in air than CO2. Since both molecules vibrate to absorb infrared in a similar way you can see that it is actually water vapour which dominates the greenhouse affect on earth.  This is obvious to anyone who has spent the night in the desert where the air is so dry that heat loss can cool the air to freezing point over night. CO2 does not do much good for you in the desert in keeping you warm.

CO2 dissolves in water. The oceans contain large amounts of dissolved CO2 and more CO2 dissolves the colder it gets. Likewise the Oceans emit CO2 as they warm up thus increasing the concentration in the air. The effect is known to all of us. If you take a fizzy drink and leave it in the sunshine then it loses its fix fast, whereas put it in the fridge and it remains fizzy overnight as the water losses CO2 much slower.Al Gore seems not to know this fact because in his film he made the exagerated claim that a correlation of CO2 levels with previous Ice Ages proved that CO2 concentrations drive the Earth’s temperature. It is of course exactly the opposite way round. Ice ages are caused by astronomical effects related to slow changes in the Earth’s orbit and direction of spin. As the Ocean cools so it dissolves more CO2 out of the atmosphere and levels fall. In fact there is a clear time delay between the two signals of 1-2  thousand years.

Solubility of CO2 at a partial pressure for CO2 of 1 bar abs.

A 5 degree rise in ocean temperatures would seem to imply about a 15% decrease in CO2 concentration in the Ocean, causing a significant increase in the atmosphere. 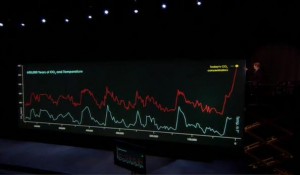 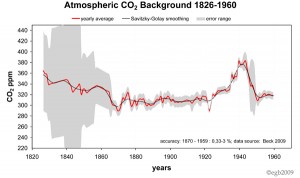 It turns out that there were also regular CO2 measurements made before 1960 which have been dismissed as inaccurate and ignored (see above). So what are we to make of all this? Maybe the old CO2 measurement data were biased by local polution at the time. Maybe the temperature data are themselves  biased by their proximity to urbanisation. My strong feeling is  that the case for CO2 to be a primary driving force for climate change has not yet been made. Water Vapour and clouds are between one and two orders of magnitude more important. Several estimates place water vapour as being 95% of the greenhouse effect on Earth with CO2 providing about 3%. Human additions to CO2 concentrations on this scale are < 1%  of greenhouse gas effects. This does not mean to say that it is not important to curb emissions,  but the doomsday scaremongering on climate which sometimes seems more politically motivated than justified is miss directed. The best way to curb CO2 emissions is anyway to expand dramatically Nuclear Power rather than industrialise yet more of the countryside for very little return.

3. Climate Models. These predict future climate based on complex theoretical interpretaion of how earth systems work. they attempt to model, solar heating, radiation balance, atmosphere/Ocean interactions, Ice dynamincs, Cloud dynamics, Carbon cycle, solar variation, albedo changes, phytoplancton feedback etc. The variables are endless with many unknowns. Only by fitting to past climates is it hoped that some of these parameters be pinned down to give reliable future predictions of climate. Currently models that correctly follow the observed past temperature profiles of recent years need to include CO2 effects to some degree. This would appear to support that CO2 has begun to effect temperatures. However if there are natural variations at play which are causing warming such as a continuing recovery from the little ice age, these effects are of course not included in the models.

The Earth’s climate is such a complex system that I doubt whether anyone can be 100% certain one way or the other. Human damage to the Earth’s environment is self evident and we don’t need the one issue of climate change to dominate all others for political reasons. One thing is for certain is that the next 10 years of  data will decide  one way or the other. I think a far greater threat to the Earth and to the natural environment is human over-population with the consequent destruction of the natural environment. James Lovelock estimates that the  world population which the Earth can sustain long term is about 1 billion people. On the same timescale as the IPCC predictions of a 1-6 degree rise in global temperatures the world population will rise to 9 billion.  So I would like to see a IPPC – Intergovernmental Panel on Population Control, although I doubt whether this will ever happen.

The current emissions of CO2 from burning fossil fuels is about 5 Giga tons per year.  A back of the envelope calculation estimates that  9 billion people will emit 3 Giga Tons of CO2 a year just by breathing ! Is it not time for a reality check ?

This entry was posted in Climate Change and tagged CO2, population. Bookmark the permalink.