When should the last lockdown end?

We can estimate when it will be safe to end all lockdown restrictions in the UK using the Imperial SIR model (report 9). Life can return to normal once the natural (unmitigated) value of R falls below 1

As of today (22nd February) we know that

The UK population is 66.6 million so as of today we have the following split in numbers

Now taking the original Imperial College model (Report 9) we can see where we currently sit on their SIR curve. 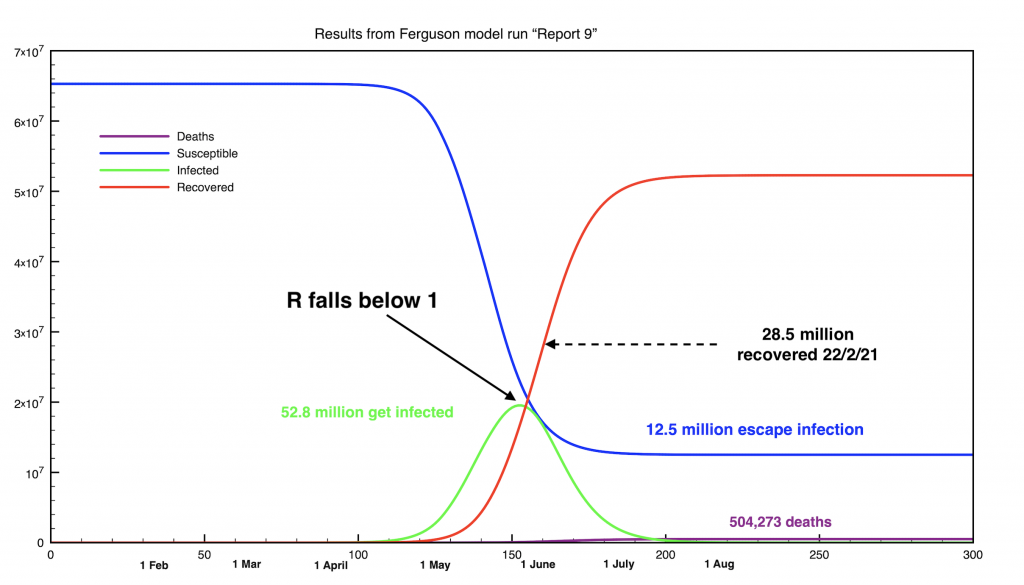 Vaccinating 17.5 million people moves them from susceptible to recovered without infection thereby reducing the  unmitigated value of R<1

The good news is that we have basically already beaten the epidemic. Even if we stopped all lockdown restrictions next week the disease would eventually peter out because it already can’t find enough susceptible people to infect in an unmitigated state (shown above). Of course infections would initially rise because of easing restrictions but this would soon stabilise and then fall naturally. The downside is that for a short period hospital admissions would rise before collapsing. We can avoid that initial panic by waiting until the number of vaccinated doubles to ~35 million by mid April then it is probably safe to end all restrictions.

The epidemic would then essentially all be over my mid May and normal life can resume.

The only question is whether Boris will have the guts to do it. Let’s hope so !

Postscript: Boris is taking a very cautious step by step approach  with the goal of ending lockdown in July. This looks over cautious but he wants to minimise any risk of extra deaths until all adults have been vaccinated.  He apparently got spooked again by the latest models of  Fergusson et al. !

Quote: “Due to eligibility and vaccine hesitancy, vaccination alone will not be sufficient to keep the epidemic under control. NPIs must be lifted slowly and cautiously to minimise the number of deaths and prevent high hospital occupancy, with some baseline NPIs remaining in place (and adhered to) throughout 2021 and beyond.”

I wonder what they mean by “under control” ?

16 Responses to The Last Lockdown