For over 100 years global sea levels have been measured by tide gauges. Their distribution has of course changed dramatically with time – just like weather stations. Satellite altimetry measurements have only been available since 1992. Therefore we depend on measuring long term  sea level rise on the tidal measurements to determine whether or not SLR  is increasing as a result of  climate change. Sea levels have been rising since the last glacial maximum, rising by over 100m. Of course all climate scientists today also believe that the rate is accelerating due to climate change. But if science is to mean anything then  the rates must be derived from independent measurement data based on tidal gauges and Satellite altimetry.

So if we first restrict ourselves to just tidal range data then we get the following result. 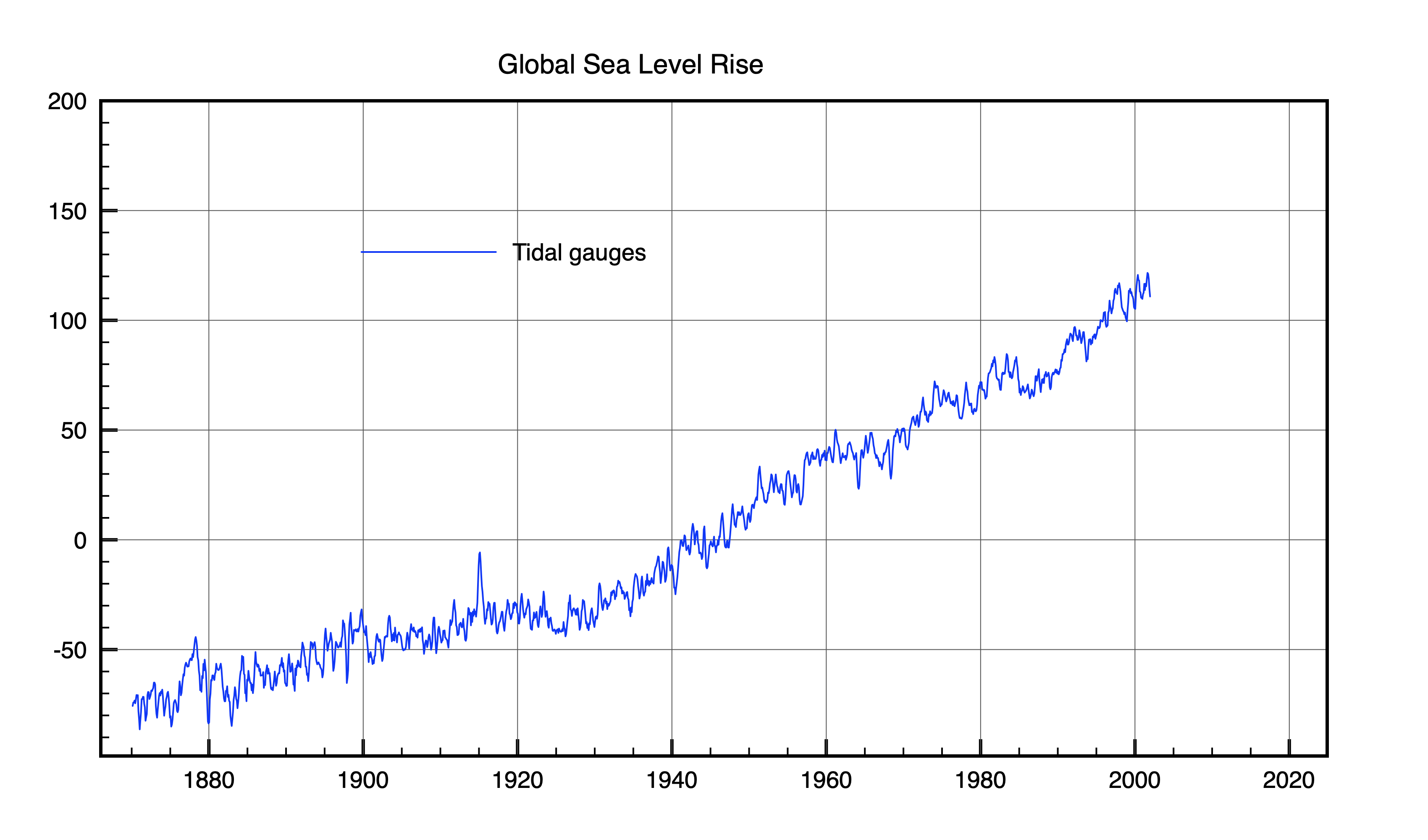 So apart from the early period there has been a linear rise in sea surface levels since 1920. Has the trend accelerated though ? We are often told that the rate of increase in SLR has quadrupled – a common meme ! But is this really true ? I downloaded all the satellite altimetry data from NOAA (Topex and Jason 12 & 3) and normalised it to the tidal range instrumentation available here. This is what I get if I take a 12 month average to remove some of the seasonal effects from the radar data. 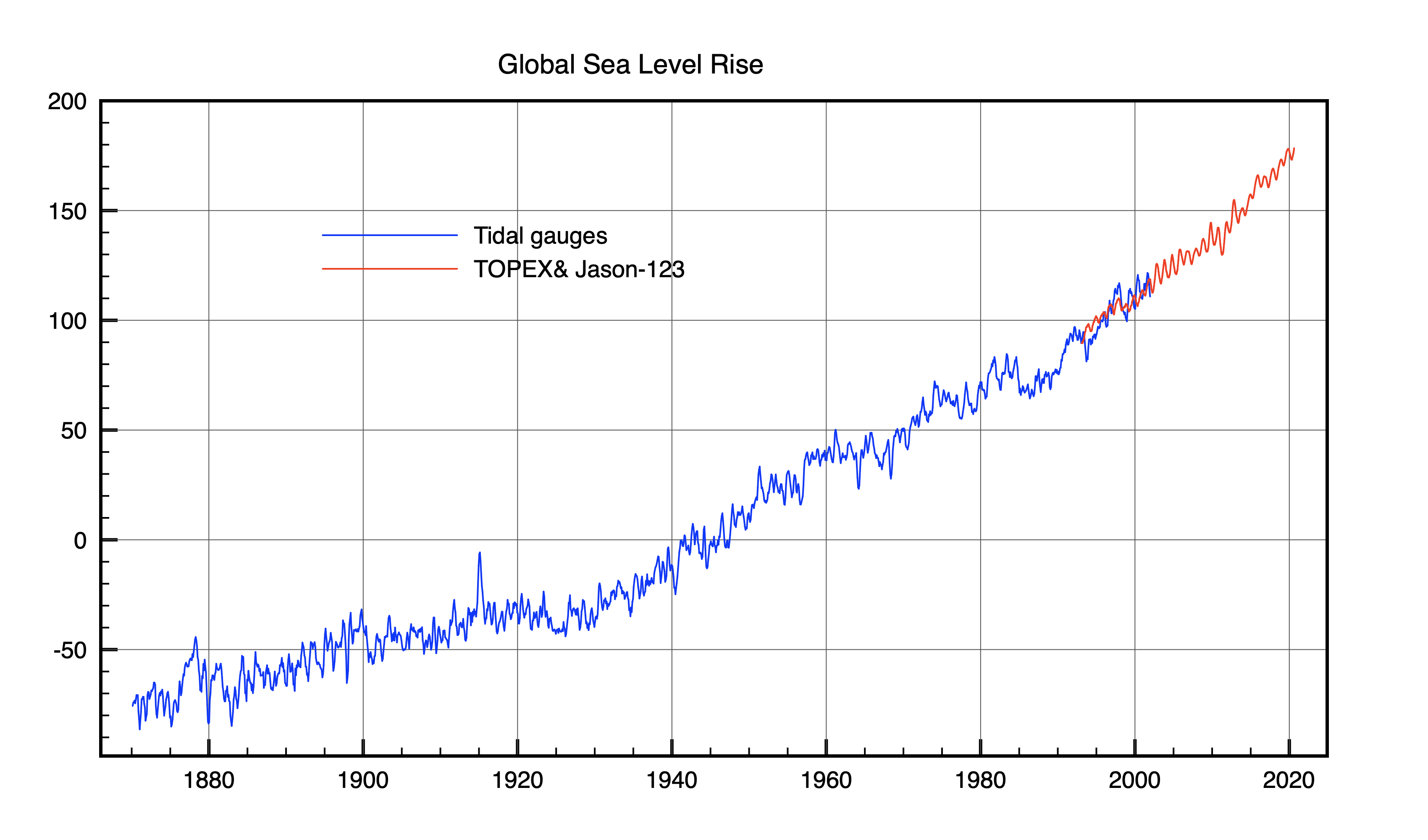 You would be very hard pushed to see any acceleration in trends based on the available data. Note I am only using the official NOAA altimetry and tidal gauge data. Yet somehow we are expected to believe instead that rates have quadrupled . This claim is mainly based on a paper from 2011 by J.A. Church and N.J. White “Sea-level rise from the late 19th to the early 21st Century” Surveys in Geophysics (2011). Here is what they find updated to 2020. This shows a sudden kink increase in trend in 1993 when the satellite data take over, but this is not seen in the actual data. 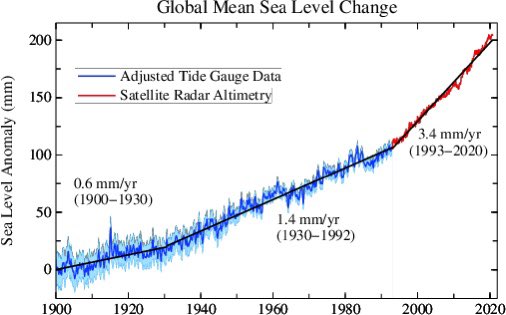 So what they did was simply to flatten the tidal  data curve by  multiplying the slope by a factor 0.78 thereby reducing the 1901-1990 trend to 1.2 mm/yr !  But even that doesn’t completely explain it. I get a rate of 2.9 mm/year SLR base on the Topex/Jason altimetry data, so somehow they have also boosted the satellite rate of change as well to 3.4 mm/yr! They also cut the data off at 1900 which implies a slower rate of increase before 1930 of 0.6 mm/yr. However if instead they had used all the data back to 1870 then that rate would have doubled!

NOAA also get a rate of change of 3.0 ± 0.4 mm/yr using all the available satellite data which agrees with what I find. 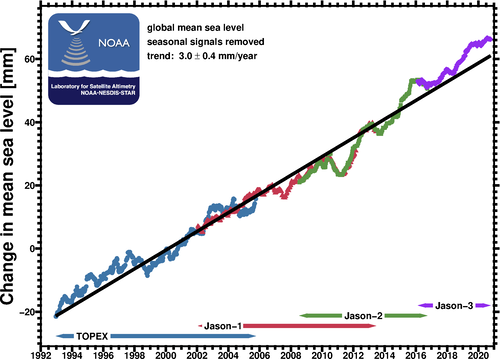 So the conclusion is that global sea levels have been rising consistently by 2.5-3.0 mm/year since 1920. Furthermore there has been no significant acceleration in this rate during that time. The often repeated claim that the rate of sea level rise is accelerating and has even quadrupled is not consistent with the data.