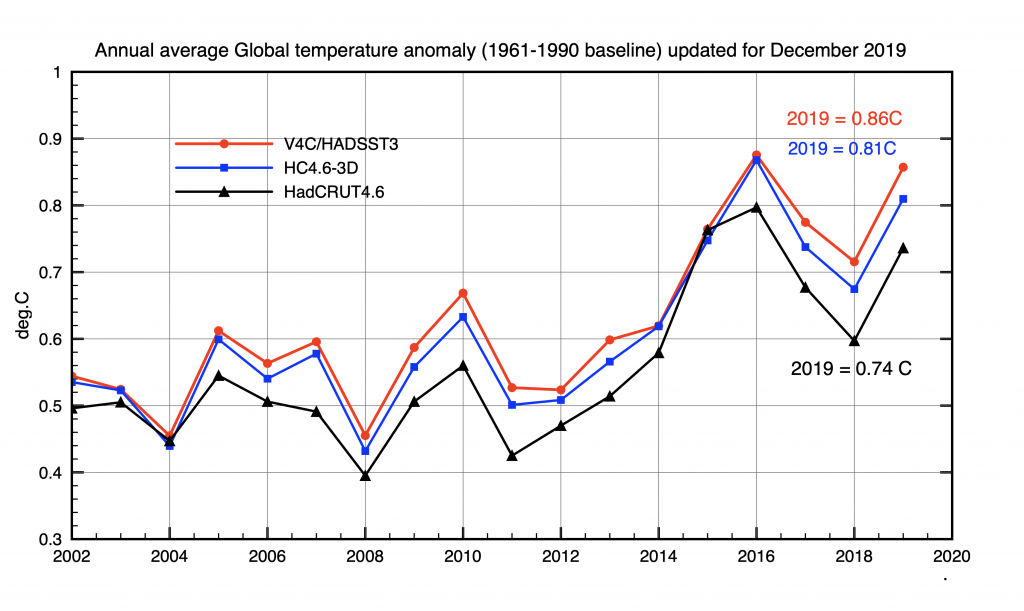 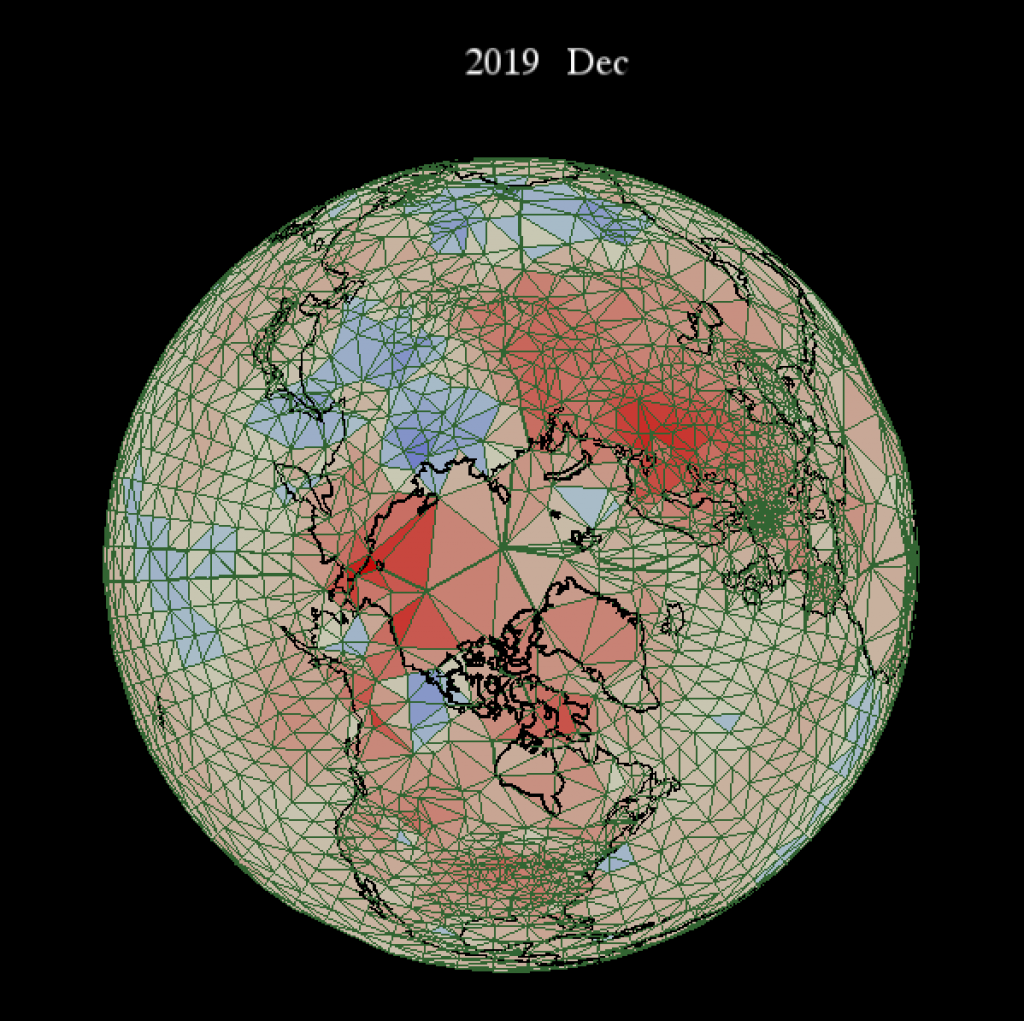 The December 2019 temperature was up by 0.12C from November at  1.01C relative to 1961-1990. This completes the annual global average temperature for 2019 making it the second warmest year at 0.86C. This is  just 0.015C cooler than 2016. All these values are calculated using GHCN-V4 and HadSST3 and spherical triangulation.

Here is the temperature distribution for December

Notice in particular the warmer than average temperatures across Australia, parts of the US and Northern Europe plus the ocean hot spot west of New Zealand.

Here are the final trend results for 2019 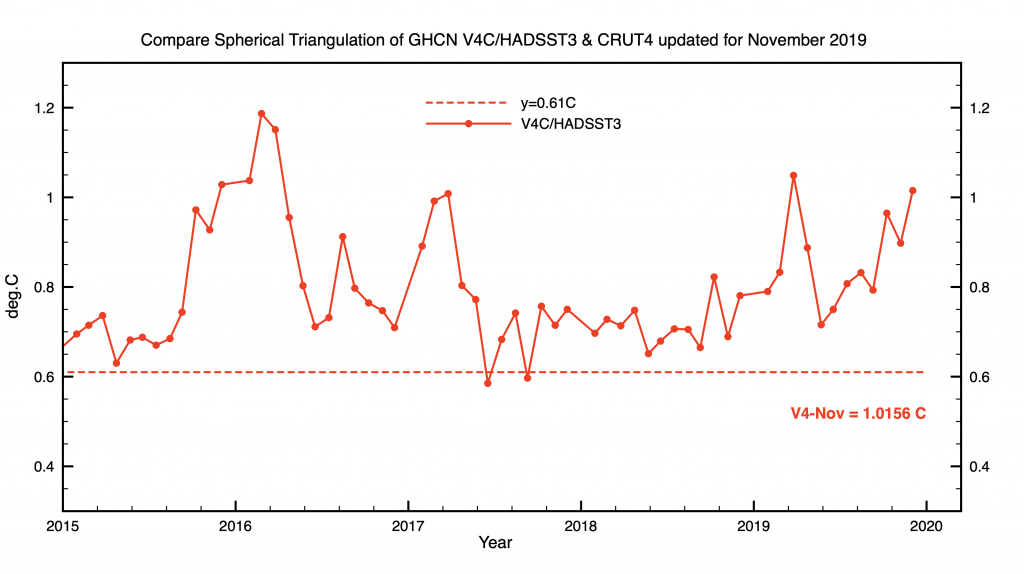 and the Annual trends showing 2019 slightly cooler than 2016. 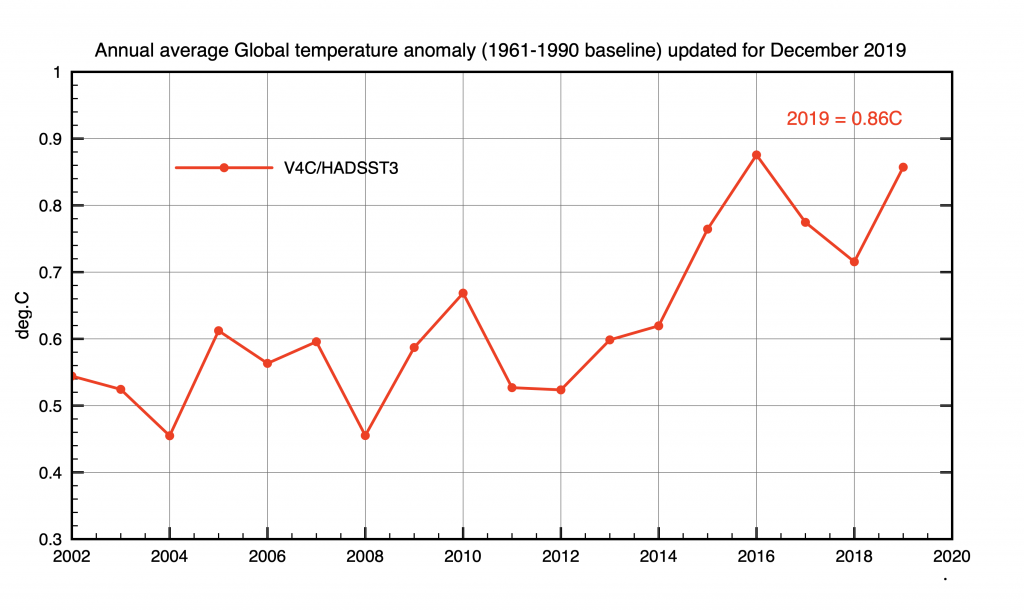 So 2019 ended with a warm December and Australia suffering terrible bush fires. I will be there in 3 weeks time and was planning to first visit the Blue Mountains.

A baseline is simply a period of successive years whose average temperature is subtracted from a time series to produce temperature “anomalies”.

One normally associates anomalies with weather station data where the baseline is then the 12 monthly seasonal averages for each station. What is less well known is that climate model projections  also need a baseline and that the end result depends on both the choice and length of that baseline period. Subtle changes in this choice can transform the apparent agreement between models and data.  We  have already met  this effect once before when reviewing Zeke’s wonder plot.  The question one might ask is why would climate models need any normalising at all ?

CMIP5 models all predict different average surface temperatures. The model projections that we see in various IPCC reports and in the press have all been normalised to some arbitrary common baseline, but they are not normalised in the same way as the  measurement temperature data. Instead they are each artificially shifted so that every model averages to zero during the chosen baseline period. As a direct result of this all models can now agree with each other that the temperature anomaly is zero within this selected  baseline.

Model projections so adjusted can now be compared to the data once that too has been shifted to match their same baseline. This is an arbitrary shift without any scientific basis, yet the agreement between models and data now simply depends on that choice of baseline. Models can basically be tuned to fit the temperature data by selecting an optimum timebase. This is the dirty secret behind climate science.

Figure 2. from Ed Hawkins demonstrates this effect perfectly. Models can appear to have almost perfect agreement to data if the baseline spans recent years. Agreement gets much worse when you select a more standard baseline like 1961-1990. This is also why Zeke got such good agreement for models as shown below. He chose a baseline which spans the full time interval for all the displayed data !

Using his baseline the models and the data had to agree because by definition both agree that the average temperature anomaly is zero, and indeed it is !

There is another trick which can be used to fine tune agreement – varying the length of the baseline period. This changes the relative spread of the model data because of short time span variations between models. Figure 3  demonstrates the effect of varying the baseline timespan. This animation is from Ed Hawkin’s Blog and shows how short timebases can radically change the dispersion in models.

Choosing a shorter of longer baseline time period affects the spread and ordering of individual model projections. This is because the baseline captures just one snapshot in model variability freezing it in based on just one time interval.

In general series of measured temperature anomalies can be moved to a different baseline by a linear shift of all points. Here for example is GHCN V4 calculated on different timebases.

It is the model projections which change dramatically when using different baselines. One should always bear this in mind whenever  an ensemble of models seem to perfectly  match the data well. They are simply constrained to do so ! That is also why at any given time future projections  fan out so dramatically 30 years into the future.

Don’t worry though because in 30 years time all the models will yet again agree with those measured temperature anomalies !