ATTP has a new post which highlights a fundamental problem with increasing complexity of AR6 climate models. This is based on a new article in Nature by Zeke Hausfather et al . Some of the latest models in AR6 are running far too hot. The more sophisticated they try to become  so the hotter they seem to run. Modellers introduce new complexity through informed guesswork to parameterise it. The article notes however that such “hot models ‘ have problems.

“Numerous studies have found that these high-sensitivity models do a poor job of reproducing historical temperatures over time and in simulating the climates of the distant past. Specifically, they often show no warming over the twentieth century and then a sharp warming spike in the past few decades, and some simulate the last ice age as being much colder than palaeoclimate evidence indicates”

ATTP summarises the article as follows

The Hausfather et al. article was basically suggesting that researchers who use climate model output to assess the impact of climate change should aim to follow a similar practice to what was presented in the most recent IPCC report. Use GWLs, rather than simply focussing on scenarios going to 2100, weight the models if the warming trajectory is relevant, and try to consider which models may be best suited to the problem that is being considered.

So I thought it would be interesting instead to go right back to basics and use the simplest CO2 green house climate “model” possible. From this we can derive the radiative forcing due to rising levels of CO2 giving a logarithmic dependence

Following this we can simply make an estimate for the net change in surface temperature due to CO2.

) we then get a global averaged

If we assume that each increment in forcing DS is offset by the same increase in Black Body radiation due to a small surface temperature rise DT, then we can iterate through the temperature rise due to increases in CO2 concentrations. We take Pre-industrial CO2 levels as 280 ppm with an associated temperature of 288 K

Here is the result of this “model”. 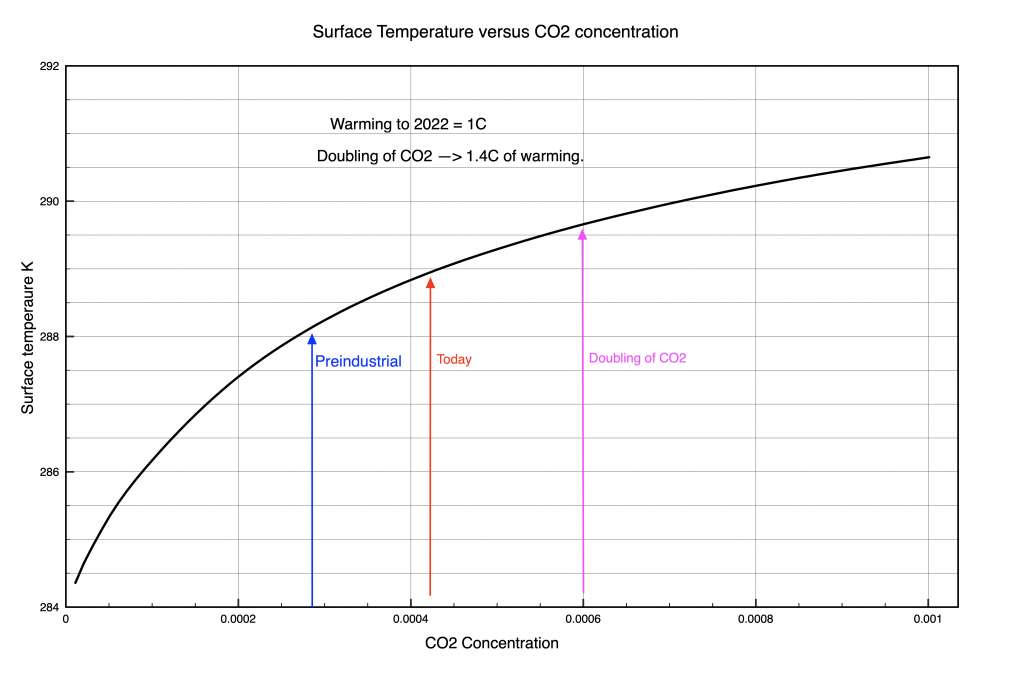 We can see that temperatures should rise by ~1C since pre-industrial times which proves to be surprisingly accurate!  A  doubling of CO2 levels would then lead to a net temperature rise of just 1.5C due to the logarithmic increase in forcing. This is not a  “climate  breakdown”.

I once worked on Magnetohydrodynamic (MHD) code for modelling Tokamak plasmas. That too was immensely complicated but recent breakthroughs in fusion have mainly been  experimental. So I suspect the same will apply to our current dependence on ever more complex climate models predicting imminent doom.