The natural climate of Earth today is really an Ice Age with temperatures 2-4 degrees colder than today. For the last 1 million years glacial periods lasting about 80,000 years dominate interspersed with regular warmer interglacial periods lasting 10-20,000 years. The rapid expansion of human civilization has all occured during the most recent warm period which has already lasted about 10,000 years. In the previous post it was shown that each interglacial coincides with a maximum of the orbital eccentricity. Furthermore regular smaller temperature rises also occur with larger obiquity. The last interglacial occured with a coincidence of both effects which may have caused the rapid rise in temperature from the last glacial maximum.

The strange thing about both these  observations is that each effect acts to accentuate differences of insolation with season. Currently the Earth’s ellipticity is 0.0167 and summer in the Southern Hemisphere coincides with the closest distance to the sun. This also means that winters in the Northern hemisphere are less severe now than they were at the last glacial maximum when 13,000 years ago due to the precession of the equinoxes. 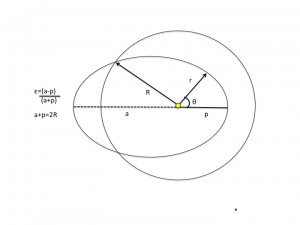 We can calculate the change in average insolation during the year with ellipticity assuming an average value of 342 watts/m2 for a circular orbit. The result is shown in the next figure. 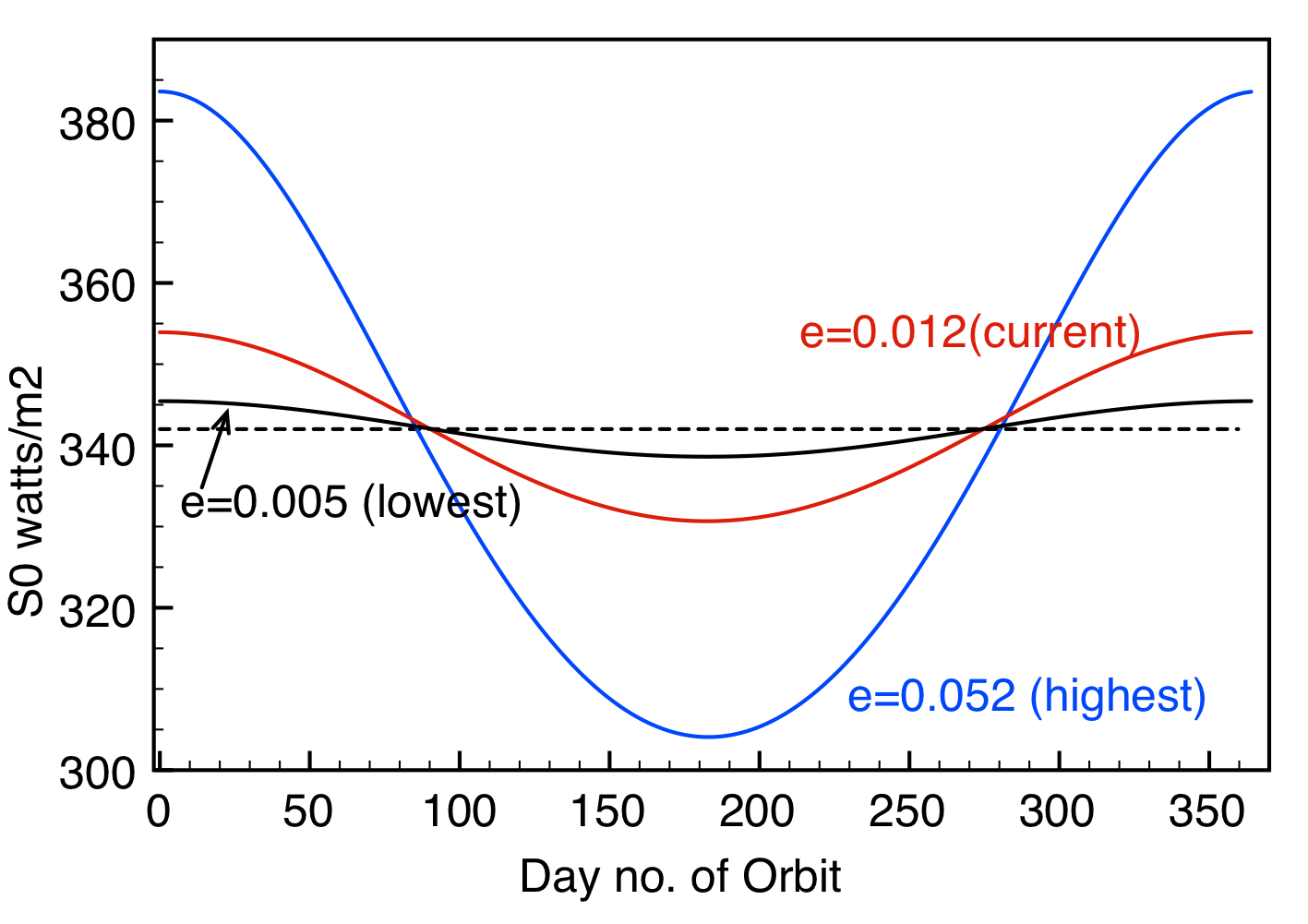 Change in solar radiation during the year for different ellipticity

Conservation of angular momentum ensures that the average solar radiation remains 342 watts/m2, but this also shortens slightly the seasons can be seen in the variation of cross-over for different ellipticities. The value 0.058 is the largest ellipticity the earth reaches during a 400,000 year cycle. The current value is shown in red and shows that the southern hemisphere summers receive up to 25 watts/m2 more radiation than Northern summers and the inverse for winters.  What does the actual data show ? We can see this by taking the Hadley Cru global average temperature data since 1850. Instead of looking at global warming we just look at the comparison between the monthly temperature anomaly versus the yearly average temperature anomaly. Then look at he average divergence over the 160  year period. We get the following curve. 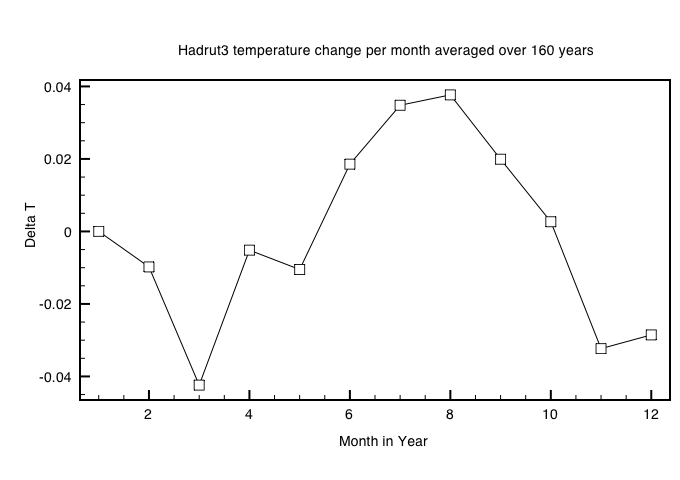 Temperature divergence for each month for Full Hadcrut3

The result shows an effect of around +- 0.04 degreesC but in the wrong direction !  This shows that the primary effect on Earth is the diference in ocean coverage between North and South. Despite the southern hemisphere receiving more solar energy in summer, this is offset by the thermal inertia of the oceans. Greater temperaure extremes are seen in the Northern hemisphere, than in the southern hemisphere. For this reason Ice Ages and interglacials seem to be triggered by effects mainly in the Northern Hemisphere

It is clear that the ellipticity effect is somehow getting magnified in the Northern Hemisphere to bring each Ice ages to an end. In the tropics the variations in solar energy effectively gives rise to an extra orbital season. 17,000 years ago thye variation in insolation at the equator was 10% between equinoxes due to this effect. There is also a subtle effect on global average temperaures caused by the effective negative feedback from Stefan Boltzman. Differentiative Stefan Boltzmans relation we get

ds = 4*sigma*T^3 dt    so  a temperature change dt will be induced by a change in radiation ds at temperature T of  ds/(4*sigma*T^3). This can be calculated  relative to say a fixed T=283K for a circular radius averaged over the year. This results in a small warming effect for large eccentricities shown below. 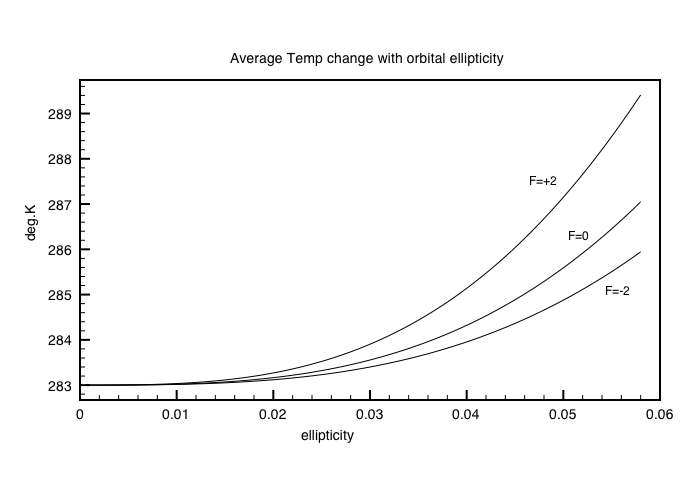 When the Earth’s orbit is near circular then summer and winter are symmetric between hemispheres. The Earth’s natural temperature would appear to be some 2-5 degrees cooler than today and in this state glaciers build up in Northern latitudes. As the orbital parameters change then increases in solar radiation for northern summers begins to melt the ice and lower albedo. This then seems to cause a run away effect which takes the earth to a new state of warmer interglacial period. The last ice age came to an abrupt end when both the ellipticiy and obliquity were at a maximum AND northern summers coincided with maximum insolation. After a warm period so the cycle repeats as the orbit becomes more circular again and the tilt of the Earth lessens and ice begins to build up again.

A fit to 800,000 years of glaciation cycles based on changes in ellipticity and obliquity was described in the last post. The overall agreement is remarkably good and shows that naturally the Earth will begin cooling to a new Ice age within 2000 years. Another Ice age would be dissasterous for mankind and it is difficult to see how the Earth could support the current population. Anthropogenic Global Warming (AGW) resulting from enhanced greenhouse gasses will likely cause between 1 and 3 degrees of warming within the next 100 years after which the temperature should level off. All this depends on climate sensitivity (feedbacks from water). When seen in the context of a million years of glacial cycles such warming could turn out to have one beneficial effect, in the sense that it could delay the inevitable astronomic cycle leading to the next Ice Age. However, it is naive to imagine that Man can overide an inevitable astronomic origin for glacial cycles.

5 Responses to What causes interglacials? Part 1.