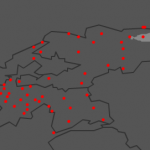 The new temperature data from  CRUTEM4 has added 628 new weather stations, including strangely enough over 50 from Kyrgyzstan. Most  of these stations are in far northern latitudes. There are none in the Southern Hemisphere. The general perception is  that the greenhouse effect is a global phenomenon and  all parts of the world will experience  “climate change”. However GISS, UAH and Hadcrut trends show recent larger increases in the Arctic.  Antarctica on the other hand shows little sign of any warming. The Arctic is surrounded by land masses and this is precisely where the vast majority of  the new station data have been added by CRU. CRUTEM4 has significantly increased sampling across the (still very cold) Arctic borders. The best way to see this is through the effect it has on global average temperatures. I will ignore  all the counter-arguments as to why  “global” temperatures cannot be shown. These are the temperatures to which  the station anomaly measurements refer and  reflect their geographic distribution. Figure 1 shows the area averaged temperatures for CRUTEM3 compared to CRUTEM4. 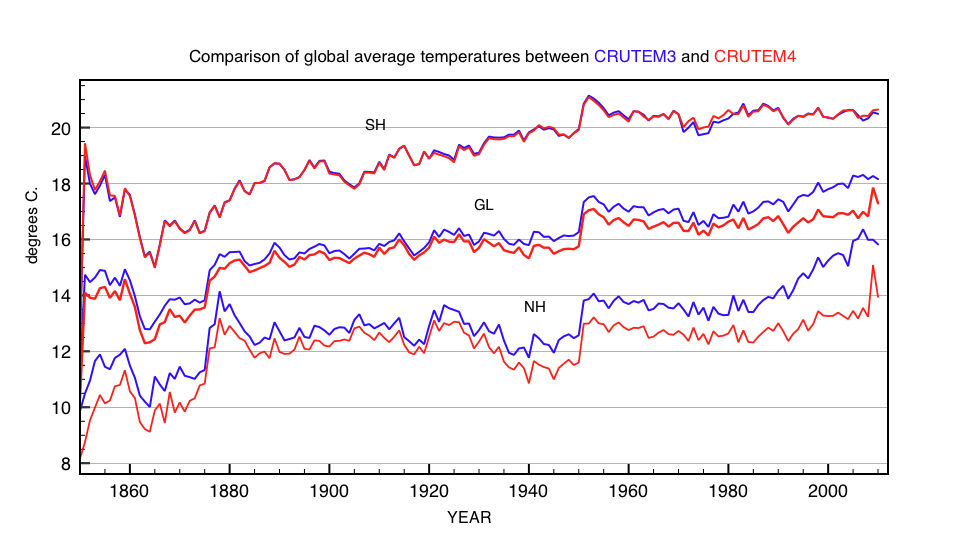 The effect of adding so many Arctic stations is to essentially  drop the average temperatures in the northern hemisphere by up to 1-2 degrees C. This is accentuated during  recent years where more of the stations have data. What effect does all this have on the temperature anomalies ? The anomalies for CRUTEM4 will naturally tend to increase slightly over CRUTEM3 for two reasons.

1. The addition of stations in an area which is already known to show  strong warming will lead to  a higher global average anomaly as  available grid points get filled in preferentially there.

2. The density of grid points in a 5×5 degree grid increase rapidly as we get closer to the poles. In fact if you stand near  the north pole and simply walk around it you will then pass through 75 grid points. This means that there are far more grid points available in which to place new stations than for example at the equator. Furthermore because there is so much land area close to the north pole there are stations nearby unlike at the south pole. It is true that the area averaging does weight according to  latitude. However CRUTEM4 has filled as many grid points as possible just near the north pole. It is clear that this is the explanation as to why  the post 1998 anomalies have increased sufficiently for 2010 to become the “warmest year”, although within errors this is anyway meaningless. A detailed comparison of the anomalies after 1994  is shown in Figure 2. 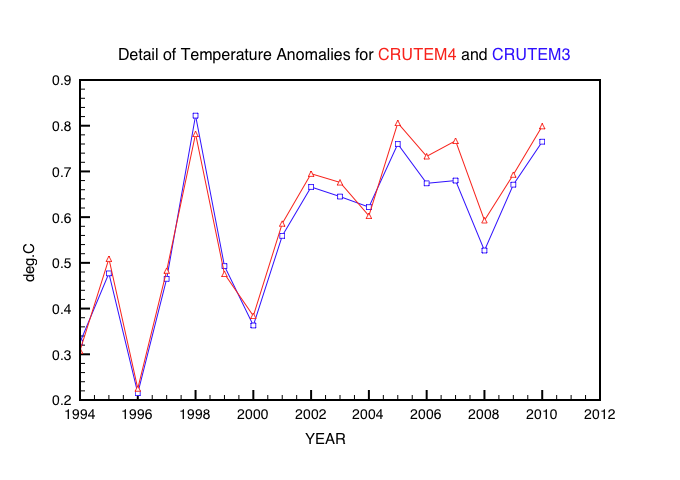 To look further into this  I compared missing grid points between CRUTEM3 and CRUTEM4. A missing grid point is simply one single 5×5 cell which does not contain any stations. There are 2592 cells in a 5×5 degree world grid of which perhaps 65% contain just ocean. If all available land points were covered with stations then there would be an ideal minimum of  ~1700 missing cells. Figure 3 shows the actual number of missing cells per year (and month) for CRUTEM3 and CRUTEM4.

The geospatial changes can be seen in more detail by comparing the ratio of sampled cells from the tropics (LAT < 25) with those at large latitudes (LAT >25) – see Figure 3. 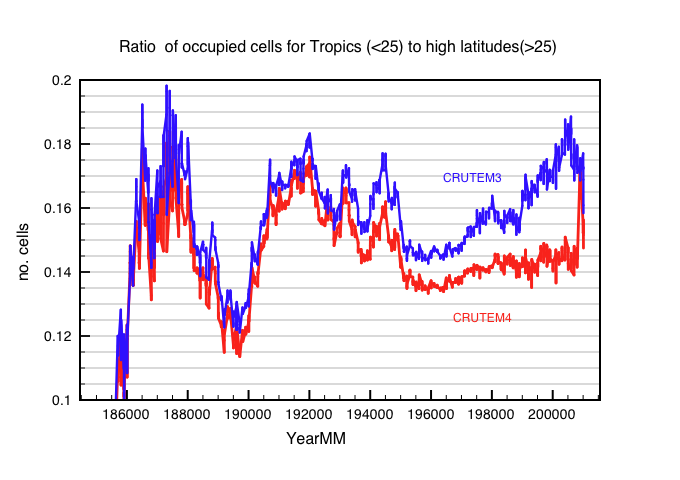 Fig3: Ratio of sampled cells from the Tropics (LAT<25) and higher latitudes

CRUTEM4 accentuates further the sampling bias away from the Tropics.  It is pretty clear that  oversampling of  the arctic region  leads to an  increase in the “global” temperature anomaly, as is now “measured” with CRUTEM4.  However,  it should be remembered when reading various press releases and news headlines that  the error on  a single annual anomaly value is ~ 0.1 deg.C , so statistically it is meaningless to state that 2010 is warmer than 1998 or vice versa.

P.S. I wonder what is the real origin of  the spike in 2009?  Why did  so many of the new arctic stations suddenly  disappear that year ?