The “runaway greenhouse effect” on Venus is often used as a stick to warn us as to what could happen to planet Earth unless we mend our ways. Can this possibly be true? I think that to understand the climate on Earth we must at least be able first to explain the climate on Venus. There have been some excellent discussions about  this whole subject: see for example [1] below. 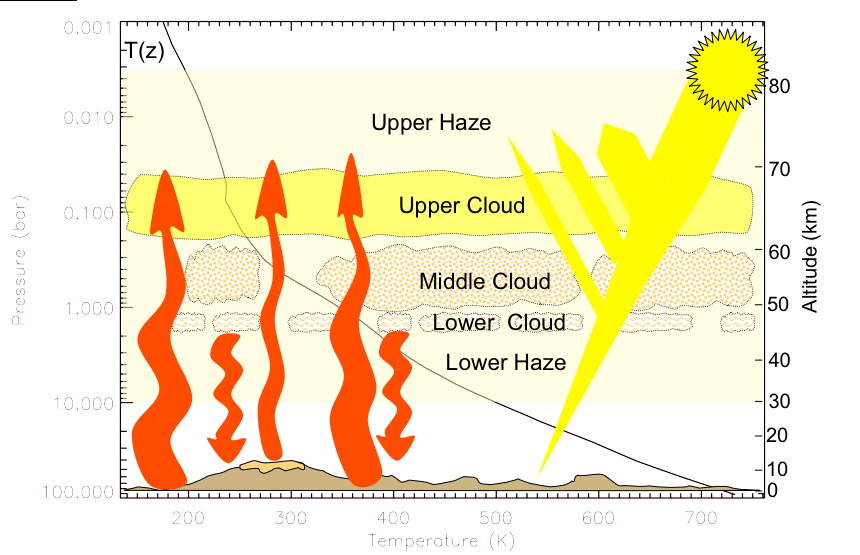 Energy flow and temperatures on Venus - from Dave Crisp, JPL "Greenhouse Effect and Radiative Balance on Earth and Venus"

Mars has 125 times less atmospheric  pressure than on earth, but despite this IR photons leaving the Mars surface still encounter 30 times more CO2 molecules than they would do in leaving the Earth. The low Martian pressure narrows a bit the absorption bands for CO2, and there is little H2O to absorb in other bands. In contrast, on Venus the pressure is a massive 90 times higher than Earth and this leads to some  broadening of CO2 bands thereby increasing slightly the bite taken out of the IR spectrum by CO2 – but this is not even half the full story.  Venus is special because it is heated from above by thick clouds in its upper atmosphere. Venus receives nearly twice the Earth’s solar radiation (TSI=2636 W/m2 – average S0= 660 W/m2). However 76%  of this radiation is reflected by clouds and of the remaining 170 W/m2,  90% of it is  absorbed by these H2SO4 clouds at the top of the atmosphere. Just a tiny 2.5% of incident sunlight (just 17 watts/m2 !) reaches the surface [2]. That is equivalent to one light bulb heating a small room. So the narrative of a runaway CO2 greenhouse effect on Venus caused by CO2 absorbing IR emitted from the surface  thereby causing warming through “back radiation” (IMHO) simply cannot be true. Instead I think Venus is “heated” from the top of the atmosphere downwards via the adiabatic lapse rate.  If 90% of available sunlight is being absorbed some 50 km above the surface then this is the level that must reach the effective temperature Teff of Venus  (260K ) needed to balance absorbed Solar radiation with IR radiation out to space. This sets the scale of the lapse rate to be 50 km above the surface. Convection then drives the temperature gradient towards the  adiabatic lapse rate by pumping heat down to the surface as the temperature at 50 km is now normalised to 260K. The adiabatic lapse rate depends only on gravity and Cp of the atmosphere. It must be the driver of massive heat flows downwards  to heat the surface. It acts like  a global heat pump with the surface mainly heated from above through convection. Maintaining a lapse rate needs some net heat flux and greenhouse gases allow energy loss from the top of the atmosphere to space, but the radiating level on Venus is set at 260 deg.C 50 km up in the atmosphere because it is directly heated by the sun. So Venus surface is heated through convection from above and not directly by CO2 greenhouse effects.

To see why CO2 alone cannot be the cause of Venus’s high temperatures consider the effects on Earth. The forcing of a Mars like 30 fold increase in CO2 in the Earth’s atmosphere is 5.3Ln30 =  leading to about 5 degrees of warming. A Venus like 300,000 fold increase in CO2 only  leads to just 19 deg. C. However, the greenhouse effect on Mars is negligible and on Venus it is a whopping 500 degrees. So there must be more to it than CO2.  CO2 only absorbs IR in selected bands. The logarithmic effect is due to the decreasing influence of extra CO2 once these bands get saturated. Although there is some pressure broadening on Venus  this is insufficient to explain the crushing greenhouse effect on Venus. In reality Venus has a host of other greenhouse gases present as well – SO2,OCS,H2S,H2O. Water vapour is also present in the clouds.

How high does the convective troposphere extend ? 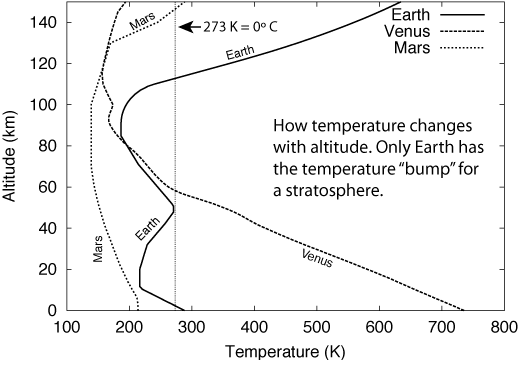 The lapse rate extends for between 3-4 scale heights on each planet and seems to be independent of pressure. The scale height is the height at which pressure or density reduces by 1/e.

The tropopause on Earth ranges in height from between 10 – 16km. Mars is at about 45km and Venus is at 55km.  I suspect the tropopause occurs when radiative heat transfer exceeds convection. Mars has such a low greenhouse effect that radiation occurs mostly from the surface. The height of its tropopause is likely due to low gravity falloff with pressure. On Venus the tropopause lies at 55 km  at the top of the H2SO4 clouds where IR radiates freely to space. Clouds only exist so high up in the atmosphere because the surface pressure is so high.