The Central England Temperature data is the longest continuous instrument measurements in the world from 1650 – 2012 [1].  Do they show evidence of Anthropogenic Global Warming (AGW)? Likewise detailed UK station temperature measurements since 1940 are available through  Hadcrut4 dataset[2]. Do these show recent enhanced temperature rises due to ever increasing CO2 levels?  The answer to both questions is a definitive nope!  There is no AGW signal present in either  dataset  – see figure 1. 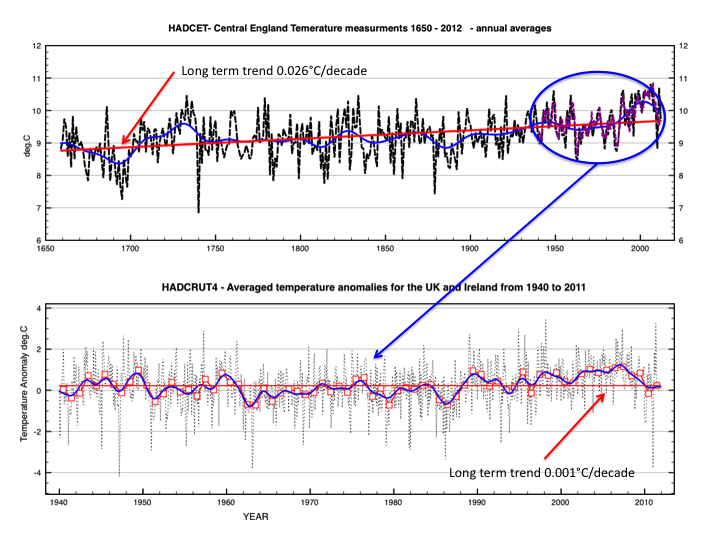 Fig 1: Above – Annual average temperatures from 1650-2012. Red line is a linear fit, blue line is a Fourier low pass filter. Overlaid in purple is Hadcrut4 for UK stations. Below – Monthly average temperature anomalies for all Hadcrut4 UK/Ireland stations. In blue is a Fourier low pass filter. Red is a linear fit showing zero trend.

The only significant continuous trend is an apparent  0.026C/decade recovery from the little Ice Age over the last 360 years. This has not changed or accelerated. There is no hockey stick!  In fact there has been no change whatsoever in UK average temperatures since 1940 !

The other scare story that we often hear is that the weather is getting more extreme due to AGW. Ever since I was a child there has  been a common misperception that for one reason or another the weather is always getting worse. Is that  not simply because UK weather often seems to let us down for holiday breaks ?  Is there any truth at all in the AGW claim  that meteorological records are being broken almost every day ?  Figure 2 shows the UK Met office records for extremes in temperature, rainfall and storms (wind). This collage is taken from their web-site at http://www.metoffice.gov.uk/climate/uk/extremes/.  As you can see most of  the climate records have been set in previous centuries! So no real worries there either. 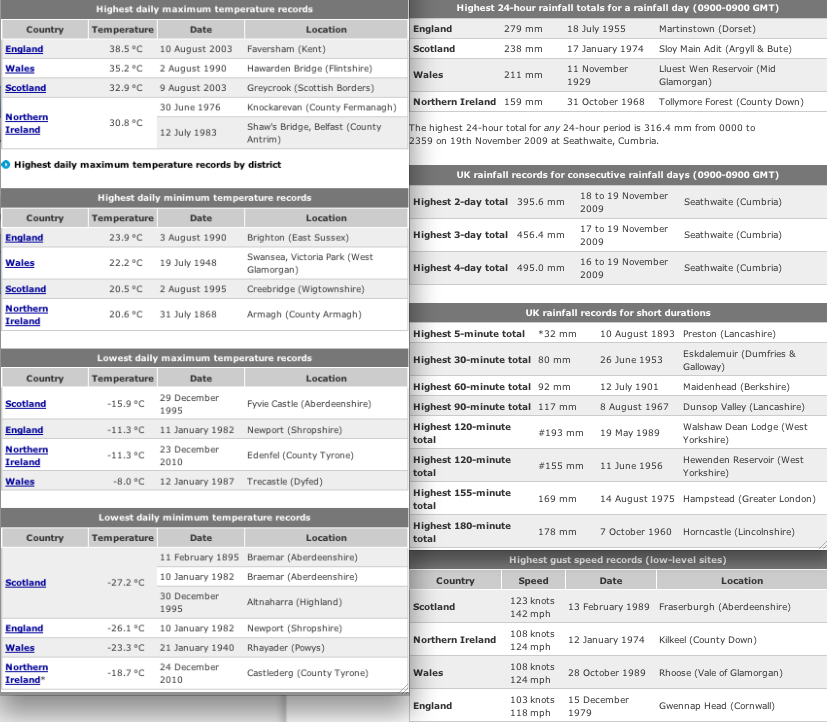 Given that there has been no climate change in the UK since 1940, Is it not perhaps time for a policy  rethink ?

11 Responses to Any AGW signal in UK temperature data ? – Nope !