In this post I look at how exceptionally strong tides over the first few days of January 2014 could have played a role in the severe storm that hit the UK on the 5-6 January.

Meteociel.fr provide twice daily (midnight and midday) pressure maps of the polar regions which show how the polar Jet Stream changes rather well. The Atlantic storms last winter were all spawned in a region near off Nova Scotia where warm tropical air meets cold polar air creating instability. Did high spring tides play a role in triggering these storms? The video below shows an animation of the horizontal tractional forces acting on the Jet Stream as spring tides sweep through the Atlantic. Maximum spring tides were experienced 3-6 January which also led to coastal flooding on UK shores.

Early january saw the strongest tides of 2014. The figure below shows the relative magnitude of the combined solar/lunar gravitational tides. At the equinoxes spring tides at new moon and full moon  tend to be roughly equal, whereas in winter it is new moon tides that dominate. The chart below was prepared by Roberto Madrigali

If we look in more detail at the January storm we see that large tides sweeping across the Atlantic may have affected the unstable convergence of warm tropical air and cold polar air east of Canada. This was where the very low pressure January storm was spawned. 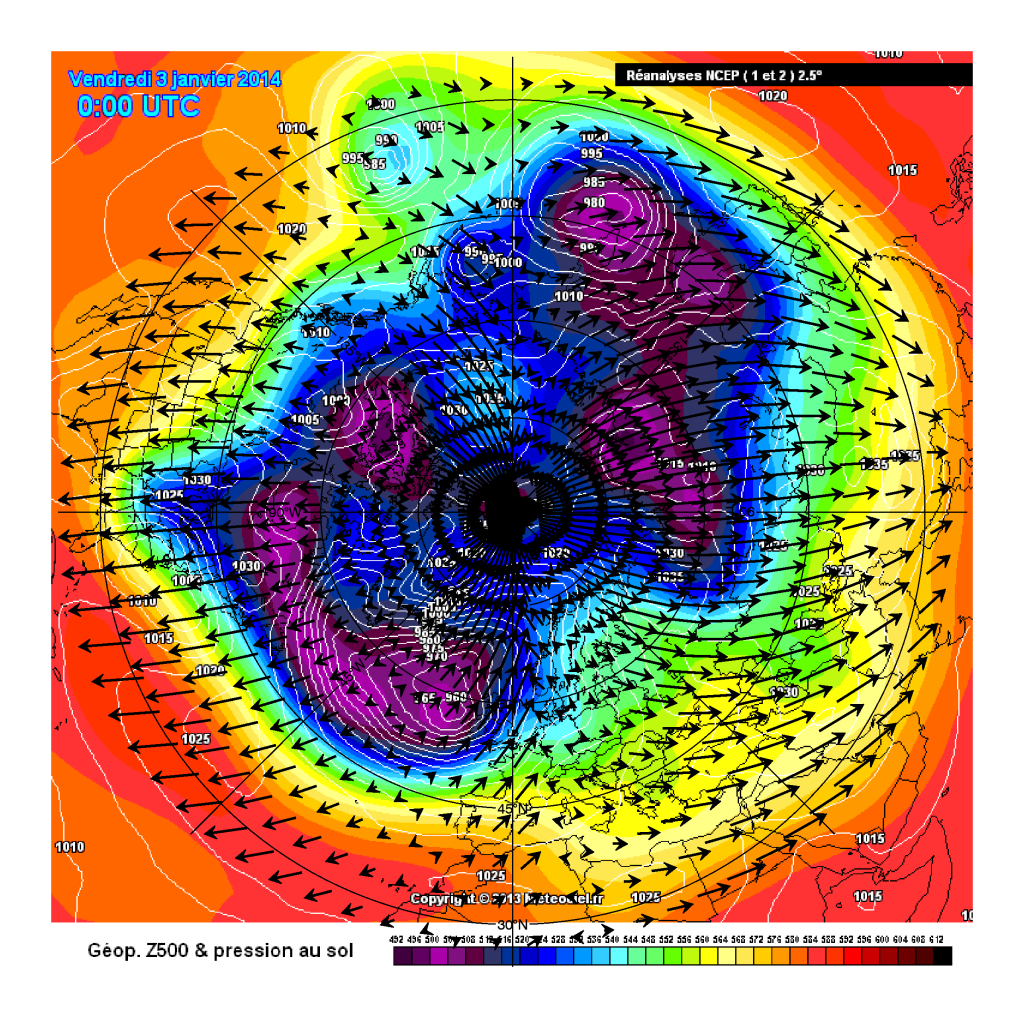 A tongue of warm air enters from the Gulf 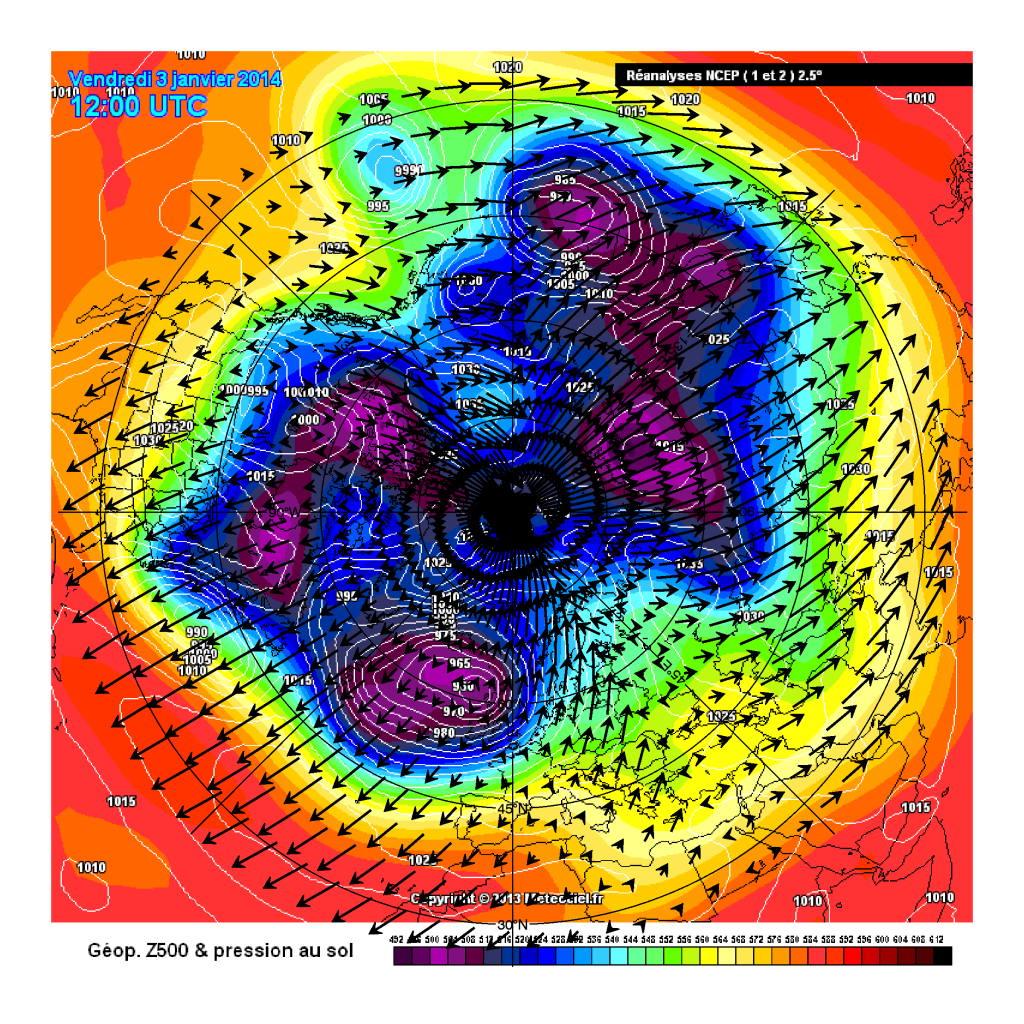 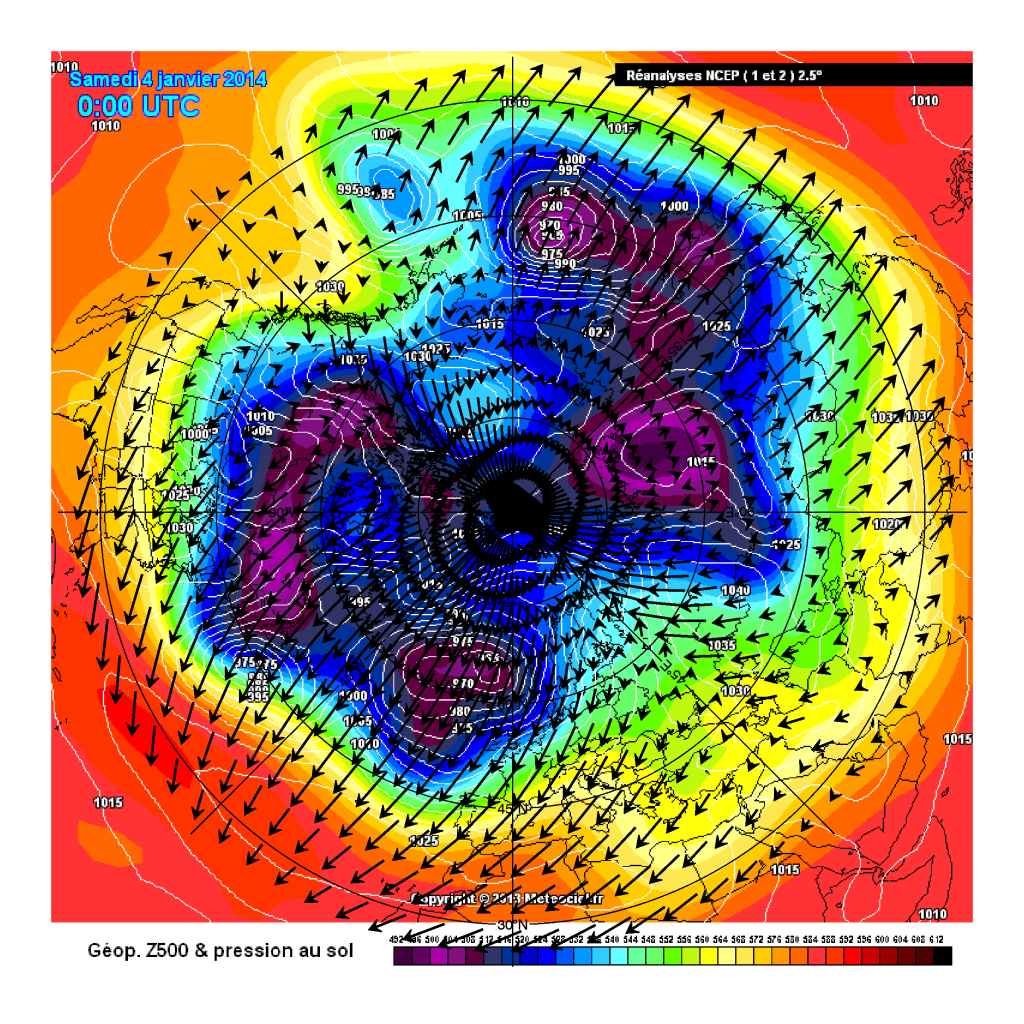 A very intense low is forming 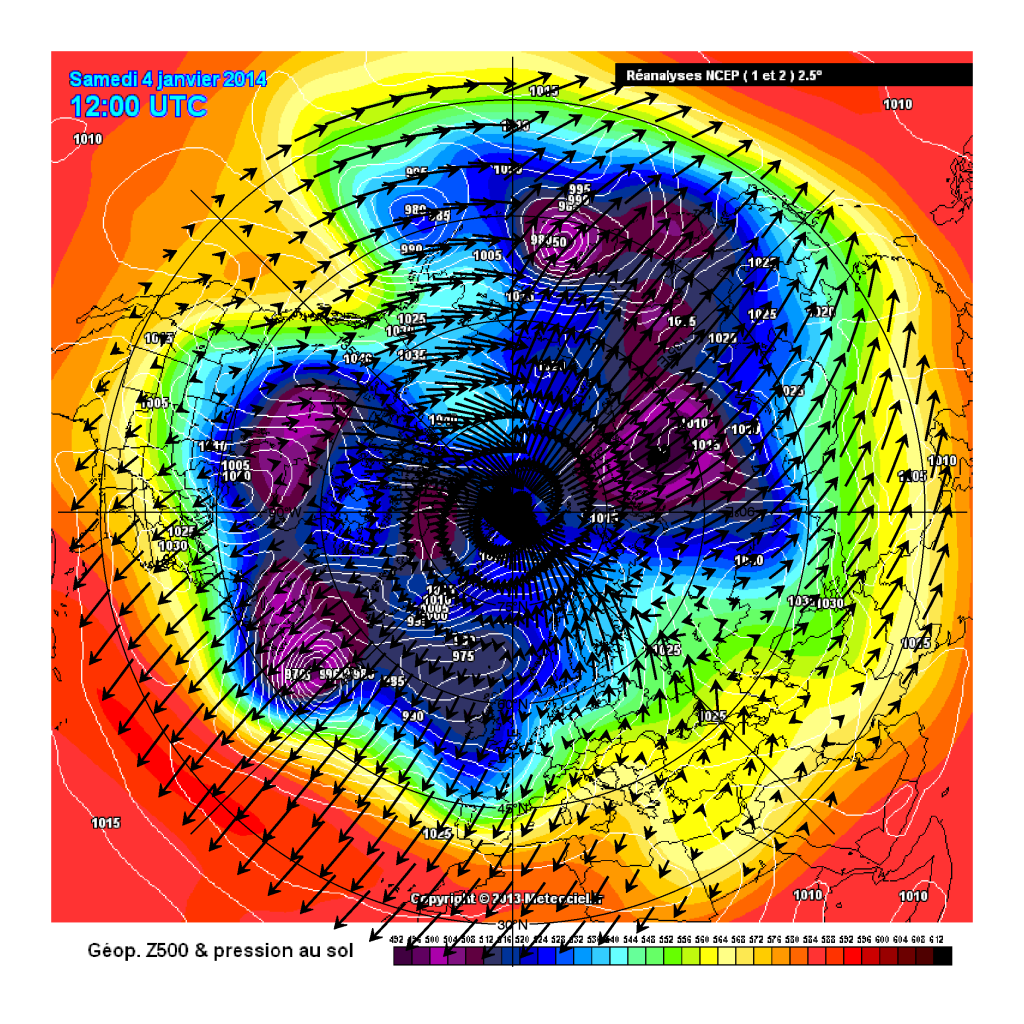 This low merges with a pre-existing low pressure system 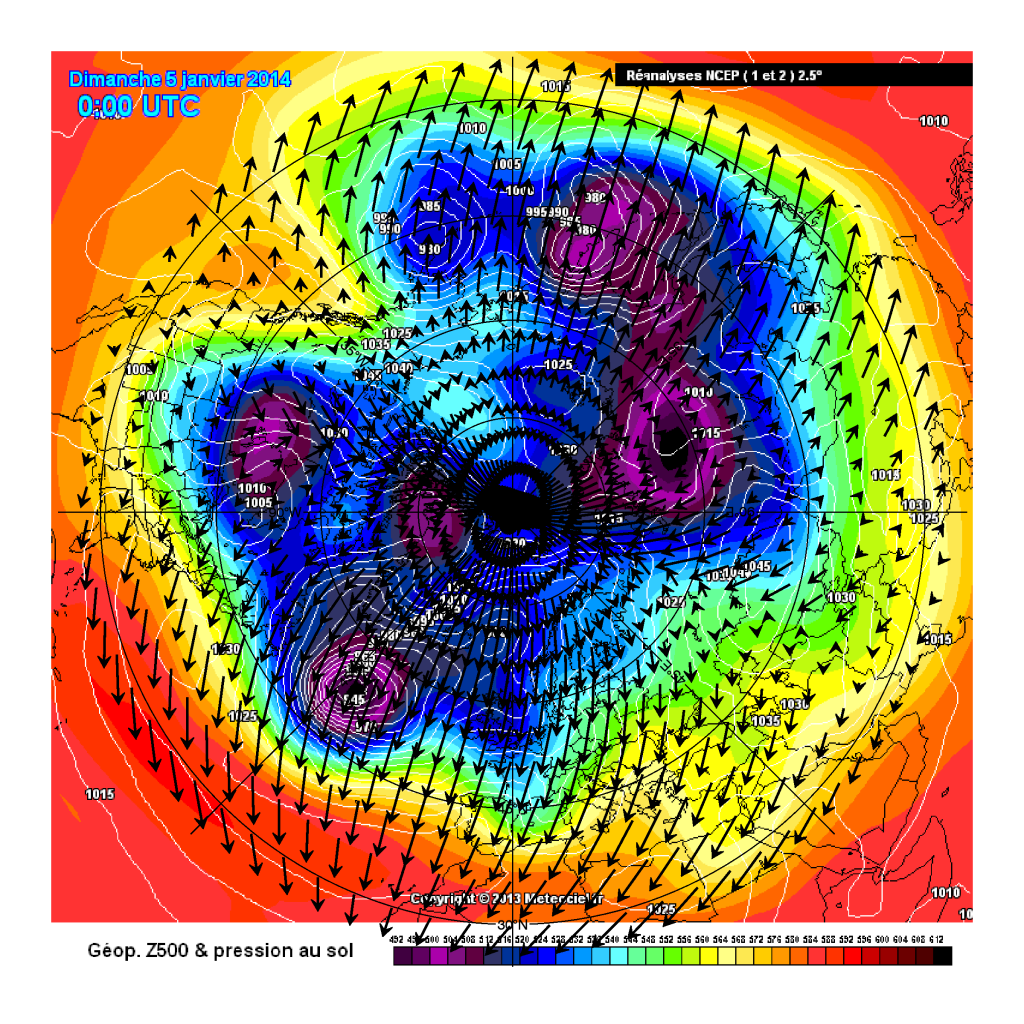 The storm is born and moves westward following the Jet Stream towards the UK. 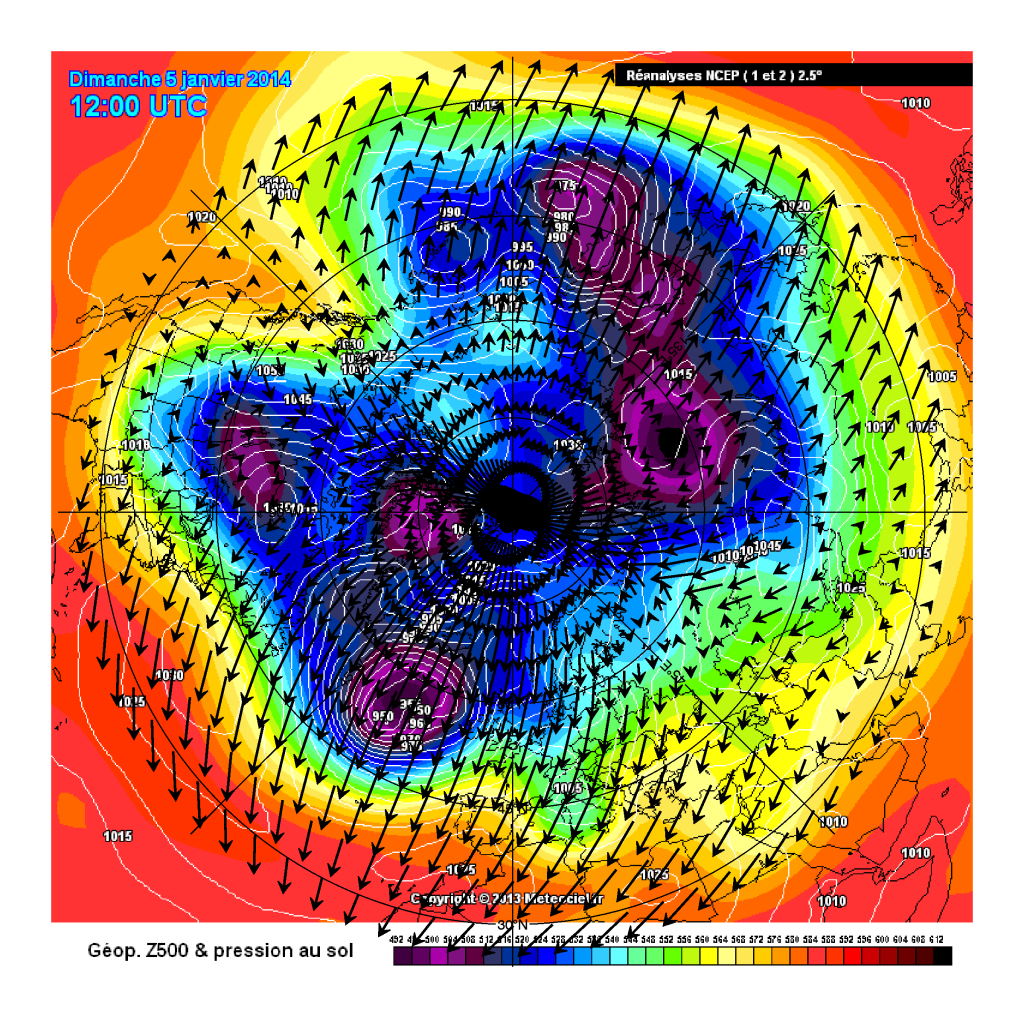 In early January, the focus of concern again shifted to coastal flooding, particularly affecting exposed locations in South West England and South Wales. A large area of low pressure in the north Atlantic, driving strong winds and coinciding with high spring tides resulted in exceptionally high waves affecting coastal communities along the South Coast of England and west coast of Wales. In estuaries, the potential flood risk was exacerbated by high runoff from rivers.

Synoptic situation at 1200 UTC 5 January 2014, with a deep area of low pressure in mid-Atlantic driving very large waves towards western and southern coasts.

The position and undulations of the Jet Stream determine the winter weather over Western Europe and the US. I estimate the horizontal tidal forces acting on on the Jet flow can reach the equivalent of about 5 metric tons per km and tweak the flow every 12 hours as each tidal bulge passes through. Is this enough to trigger winter storms?