Nuclear fusion is the process which builds up the elements in the periodic table starting from hydrogen. Newton wasted years of his life on Alchemy, fooled like many others into believing that a purely chemical process could convert lead into gold. Elements are instead determined by the number of protons inside their nucleus, so transforming elements is not a chemical reaction but a nuclear reaction. There are two different nuclear forces in nature.

The stability of any nucleus is a play off between the strong force, the weak force and the electromagnetic force. The more protons and neutrons in the nucleus the stronger the nuclear binding energy induced by the strong force. The weak force acts to maintain a balance between protons and neutrons inside the nucleus. Stable elements tend to have equal numbers of protons and neutrons with slightly more neutrons in larger nuclei.  If there are more protons than neutrons then beta decay will occur transforming a proton into a neutron and emit a positron (anti-electron) and a neutrino. If there are too many neutrons then one of them will decay to a proton emitting an electron and a neutrino. Working against nuclear stability is the electromagnetic force.

As nuclei get larger so the electromagnetic repulsion between protons inside the nucleus increases. Eventually this repulsive force becomes so large that it overcomes the strong nuclear force and heavy nuclei start to break apart. This process is called Nuclear Fission and the energy released is the source of energy for Nuclear Power stations. The range of stability in the periodic table is been measured by the binding energy curve. 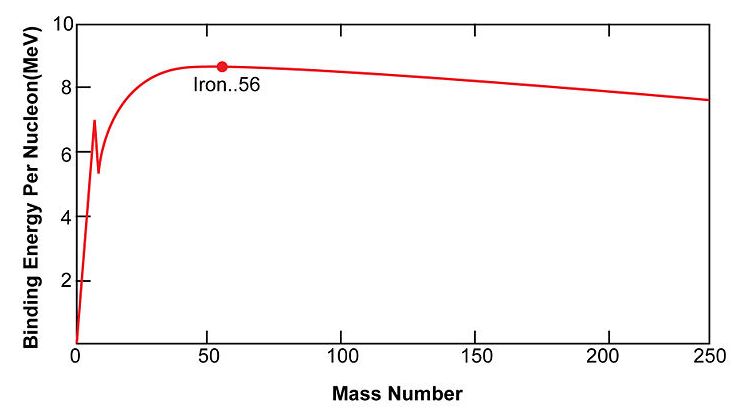 Plot showing the binding energy per nucleon for elements in the periodic table. Energy is released by fusion of nuclei to form heavier elements up to to Iron. Thereafter the energy released in a supernova is needed to fuse heavier elements. Fission of heavy elements to lighter ones also releases energy.

The spike is Helium4 which is a particularly stable nucleus and is emitted as alpha decay when large unstable nuclei decay. Nuclear Fusion is the process of building elements up from lighter elements. When two light nuclei collide together fast enough then they will fuse because the strong nuclear force then attracts all nucleons together. This usually releases neutrons and a lot of energy. For fusion to occur the two nuclei must almost touch which needs a high collision velocity to overcome the electrical repulsion between the nuclei. In practice this means a very high temperature. Stars reach this temperature through gravitational collapse, and the burning plasma core is said to be gravitationally confined.

After the Big Bang the universe consisted of just 2 elements hydrogen and helium. After about 1 billion years the first galaxies formed due the gravitational attraction. Large concentrations of Hydrogen within these galaxies clumped to form the first stars heating up as their density increased. Eventually the temperature in the core of these stars was sufficient to begin fusion and the stars lit up.

At high temperatures the electrons are stripped from the hydrogen atoms and the result is a plasma containing a sea of protons and electrons. A collision of two protons can not fuse together to make helium, which is lucky since otherwise stars would simply explode. The process that fuels our sun and all similar stars is a very rare event involving 4 protons and depends critically on the weak nuclear force. Two of the protons must decay to neutrons emitting an electron and a neutrino. Then each neutron forms an intermediate deuterium nucleus which in a second stage fuses with another proton to form He3. Then these two He3 nuclei fuse to form helium4 releasing energy and protons. The rate of energy production inside each star depends on its density and size.The sun produces nearly 90% of its energy through this complex reaction, which luckily for us is a very rare process. This means that the sun burns its fuel very slowly and will continue to produce stable solar energy for another 4 billion years. Otherwise stars would literally explode.

The fusion recation that powers the sun is ‘extremely’ rare. Firstly 2 pairs of protons need to form deuetrium neclei through the weak interaction. Secondly each deuterium nuclei fuses with another proton. Finally these two H3 nuclei fuse to give stable He4 and 2 protons.

Even more lucky for us is the fact that a massive star existed in our local area of space, billions of years before our sun formed. This super massive star because of its high density burned its hydrogen much faster than our sun, building up all the elements up to Iron . Then in one final massive super-nova it provided sufficient energy to fuse all the heavier elements up to Uranium and eject them into an expanding dust cloud. Our solar system formed out of  primeval hydrogen mixed with the dust from this supernova. The earth and all the elements inside our own bodies were all forged in that previous star. Without it there could be no life on earth.

The earth is a lucky planet. Our orbit is nearly circular; the axis is slightly tilted off vertical, mainly thanks to the moon, and our liquid oceans maintain a stable temperature for life over most of the surface. We have nuclear fusion to thank  for the earth itself and the sunlight which warms the surface.

Next we will look at Controlled Nuclear Fusion on earth.