Electrical power generation is critical for modern life. If your house draws too much current then the fuse will blow. Exactly the same logic applies for the whole UK each day to meet peak energy demand. Without power for  the  water supply, sewage treatment , transport, security and healthcare, banking and commerce, society would quickly collapse.

In August 2013 I began monitoring the Peak and Base electrical power generation on the National Grid Balancing Mechanism . For each 24 hour period since then, I calculate the instance of peak demand and the instance of lowest demand and monitor power output. In general the peak occurs at ~6pm each day and the trough (base) at around 3am each night. To keep the lights on the National Grid must meet the peak demand every day of the year. The lowest ‘trough’ demand represents so-called ‘base load’ or the power that must be available permanently to run UK infrastructure.

Here  is the overall result for all fuels averaged over each week in the 3 year period. 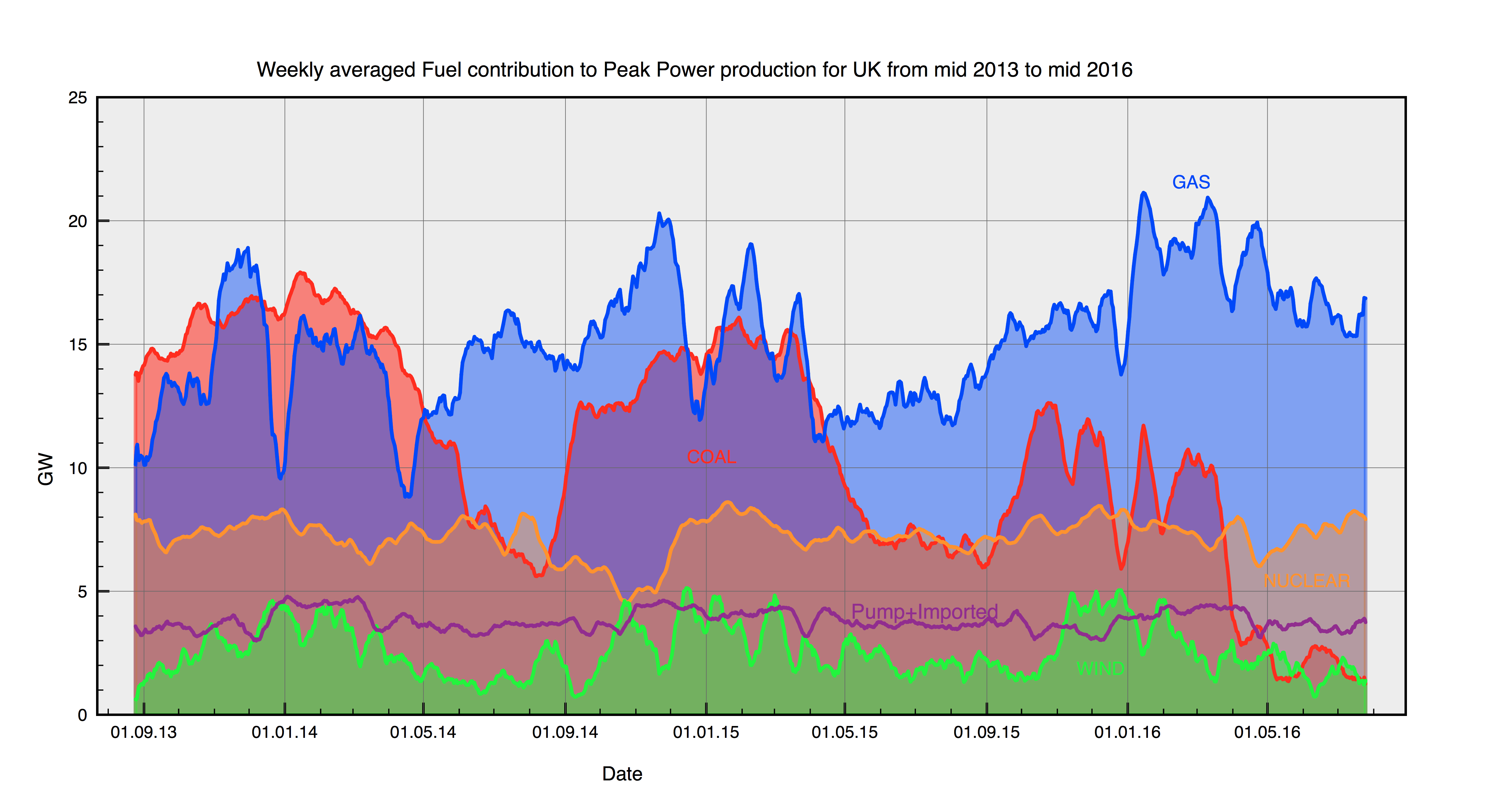 At the beginning 2013 coal was the dominant fuel, but by 2016 gas has become far more important, as coal plants have been closed. Yet coal is still essential to meet the winter power surge, and this will surely still be the case  this winter. Nuclear power is our most reliable energy source despite its age, providing about twice as much power as wind. Wind output has hardly changed over the 3 years despite enormous investments and subsidies. Note however, that the Wind values here are only for metered wind farms, and if we include smaller wind farms, which appear as drop in demand, then the power figures should be increased by about 40%. Despite this the combined imported energy from France and Holland and pumped hydro consistently outperforms wind. The detailed daily data shows how stochastic wind really is .

Output from power stations that met daily peak demand from 2013 to 2016. The regular oscillation in gas and coal is the weekend effect with lower demand. The Christmas periods are also evident. Gas power stations are used to balance short term demand powering down at night. Wind power is essentially stochastic peaking in output during winter months, but showing little long term increase.

GAS is crucial for balancing the grid. Nuclear provides a constant base-load capacity but provides no ability to balance demand. Coal is being phased out to meet carbon targets but several ‘moth-balled’ plants will likely be needed again this winter. The priority for energy security in the short term should be to build new CCGT gas stations, because the next generation nuclear plants will not be ready in time. You can see how gas output can be switched down at night by comparing the peak and trough power demand for Gas (red,purple) and wind(green,blue).

The red curve is power output from Gas at peak demand while purple is the output at night (lowest demand). The green and blue curves is the same thing for wind showing no difference. Note how gas balances wind shortfall mid 2014 and in 2016.

The overall peak and base load data looks like this over the 3 year period.

You can see that UK power demand has fallen slightly over the two year period. There are two reasons for this. Firstly there have been some genuine energy efficiency savings, and secondly there has been a growth in embedded generation (through feed-in tariffs). The largest category of these are waste and biofuel plants plus small wind farms. I estimate the net effect from embedded wind farms is to increase BM values by ~46%.  So in other words the total power contribution from all wind farms should be multiplied  by 1.46. However, since I calculate percentage contributions based on the sum of energy sources the comparison is still valid. Home Solar panels  are still insignificant on this scale.

The sources of UK  electric power generation at Peak times (around ~5pm) and at Base times (around ~3am) from 2013 to 2016 has been  measured to be  as follows.

In general Peak demand is ~50GW while Base demand is ~ 25GW. Detailed values  from the figure are given below.

Peak demand might  reduce slightly in the short term with efficiency savings, but long term Energy capacity will  probably have to double if plans to electrify transport and heating proceed as planned.

The Headlines for Wind Power performance:

The figures in brackets are corrected to include embedded small wind farms.

Nuclear cannot realistically be used to balance the grid. It can only provide base load and perhaps excess free energy at night. In Belgium this is used to illuminate all the country’s motorways. In the future any excess nuclear energy (and wind) at night can be used to charge electric vehicles. Gas will remain essential for balancing demand in the long term, and I don’t see any realistic alternative. To do this in the future we will need a minimum of 5 GW capacity.

Wind is stochastic and unreliable and will always remain so. As much energy is generated at night as during the day. Batteries for energy storage for grid supply simply won’t work. Other forms of energy storage reduce overall power efficiency to uneconomic values.  Solar energy is simply unsuitable for the UK because power production is asynchronous to demand, and the maximum average load factor is just 9%, falling to 2% in winter.

I think a sensible future for the UK would be 25 GW of new Nuclear, which is  about 8 times the capacity of Hinkley C and 25 GW of gas ( ensured by building 3 new CCGT gas stations) plus wind. Existing wind capacity is still not exploited properly because it needs an  upgrade  to power lines from Scotland to England to avoid costly capacity payments when there is too much wind. The cheapest nuclear option would be to build 8 identical proven plants such as the Westinghouse AP1000 and/or Hitachi ABWR which is already operating.

9 Responses to A 3 year study of UK Power Generation