Is the Supermoon responsible for record low Polar ice formation?

The  “Supermoon”  on November 14th coincided with the closest (perigean) approach to the earth of the moon since 1948. Tidal forces are inversely proportional to the cube of distance. Full moon occurs  when the sun lines up with the moon and November 14th is also close to the perigee of the earth’s orbit round the sun. This combined to produce strong tides. At full moon in November the moon lies in the southern hemisphere . So for the Arctic it is the opposite facing tides that is strongest while for the Antarctic it is the direct lunar facing tide that dominates. They are symmetric. Here are my calculations of the tractional acceleration at different latitude covering November, based on the JPL ephemeris.

The tractional tidal force acting at 45N (green) and 75N (blue). Polar regions experience far greater tidal ranges during the lunar month than temperate regions. The Supermoon amplified this effect by about 20%. This enhanced tidal mixing and has probably inhibited ice formation since early October.

It is the tidal range that is maximised during a perigean spring tide. That is the difference between low and high tides. At high latitudes this effect is magnified  as just one tide dominates and neap tides effectively disappear completely. This gives an extreme varying monthly tidal range. Tides act throughout the ocean,  dragging both deep  and shallow water alike. This increasing churning tidal flow since October has had two effects. First it has  inhibited natural sea ice formation, and secondly mixed in more warmer water from lower latitudes than normal.  These large tidal ranges look likely to continue till the end of 2016 before returning to normal. 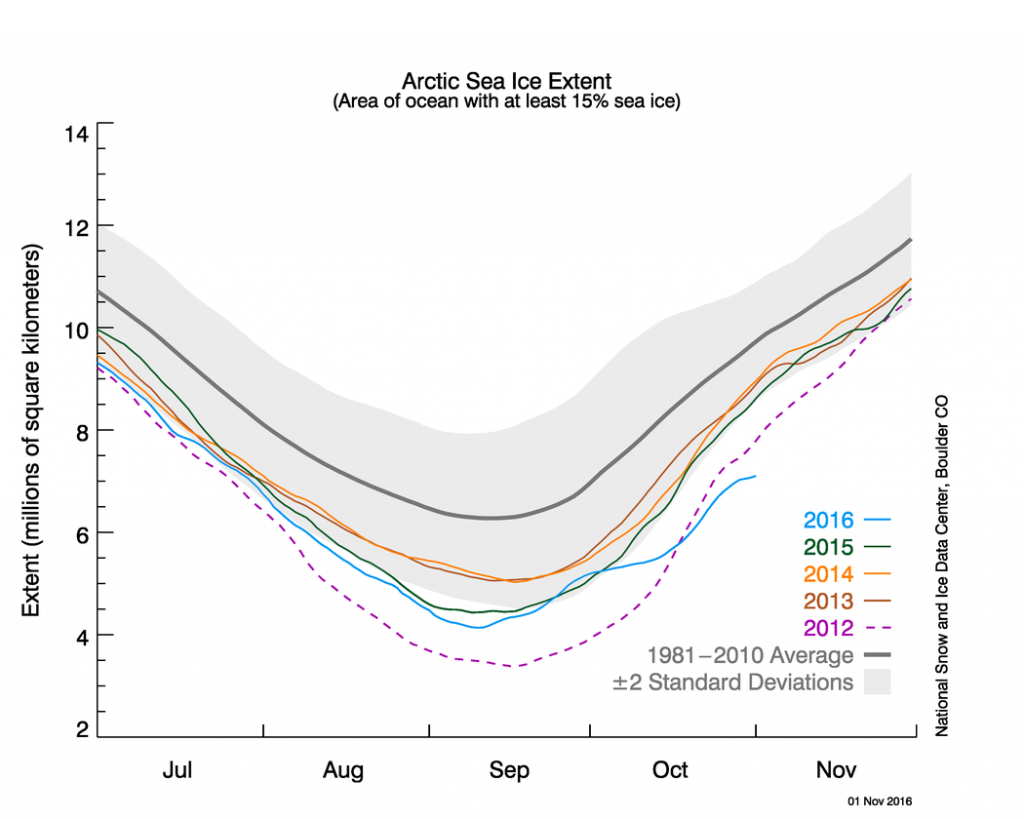 The Arctic ocean also has relatively shallow basins with narrow channels at the Bering Sea and to the North Atlantic between Iceland-Scandinavia. This accentuates tidal flow.

Thanks to @Kata_basis for prompting me to look into this !

This entry was posted in Climate Change, Ice Ages and tagged Polar Ice. Bookmark the permalink.

5 Responses to Is the Supermoon responsible for record low Polar ice formation?