This is a guest post by “Frank” based on his comment to  Stabilising Climate. He argues that CO2 levels will stabilise at ~520 ppm, which agrees with an estimate given by Ferdinand  Engelbeen here quoted below:

My rough estimate is that with the current emissions twice the current sink rate at ~110 ppmv above steady state, one need ~220 ppmv above steady state to get rid of the full ~4.3 ppmv/year human emissions. That is a level of 510 ppmv, far above the 440 ppmv of Clive… The observed e-fold decay rate of the extra CO2 in the atmosphere is around 51 years, surprisingly linear over the past 57 years. No reduction in sink rate to see

Man is currently emitting enough CO2 to increase atmospheric CO2 by 4 ppm/yr, but we only observe an increase in atmospheric CO2 of 2 ppm/yr. Presumably that means that 400 ppm of CO2 is enough to drive 2 ppm/yr from the atmosphere. My intuition says that if we cut emissions in half, sinks would continue to take up 2 ppm/yr (until sinks begin to “saturate”) and atmospheric CO2 would stabilize at the current level. On the other hand, you say that a 1% increase in CO2 to 404 ppm is enough to double the rate at which CO2 disappears into sinks from 2 to 4 ppm/yr.  Since this is a blog, I simply talk about emissions and uptake in units of ppm/yr rather than Gtons/year – it is much more intuitive and the math is far simpler.

I think maybe this is the correct mathematical formulation :

= rate of change in

= rate constant for Uptake of CO2 by all Natural sinks.

= rate constant for Emission of CO2 by Sink #1 by Natural processes.

= concentration of CO2 in Sink #1. Could be DIC in ocean.

= rate constant for Emission of CO2 by Sink #2 by Natural processes.

= conc. of CO2 in Sink #2. Could be organic material in soil in CO2 equiv. Or plant matter growing above ground. Some of this is emitted as CH4 and then oxidized, … Other sinks and rate constants.

= rate of Emission of CO2 by Anthropogenic mechanisms.

During the 10 millennia before the Industrial Revolution,

were both near zero and a steady state relationship existed.

If we assume that the size of the sinks is much larger than the amount of CO2 they have taken up so far,  and that their rate constants are independent of global warming, then the second and third terms on the right hand side haven’t changed. For the largest sink that is the deep ocean, we know that the MOC takes about a millennia to overturn the ocean. So the deep ocean sink isn’t going to saturate in the near future. The mixed layer of the ocean is rapidly mixed by wind, so the CO2 content of the mixed layer is always in equilibrium with the atmosphere and that equilibrium is only slightly temperature sensitive. It doesn’t saturate either. The land sinks are a little trickier, but let’s make the assumption their rate constants and capacity haven’t yet changed appreciably. So we can substitute:

To double-check for consistency, go back to 1960 when (IIRC)

I really should look up the 1960 values and not trust my memory. However, no sign of saturation here either.

So what happens if we continue to emit a constant (not growing) 4 ppm/yr,

and nothing else changes:

to be zero and atmospheric CO2 to stabilize when we are emitting the equivalent of 4 ppm/yr.

And my intuitive answer that we need to cut back to 2 ppm/yr to stabilize near 400 ppm (for as long as the sinks don’t saturate) agrees with this mathematics. 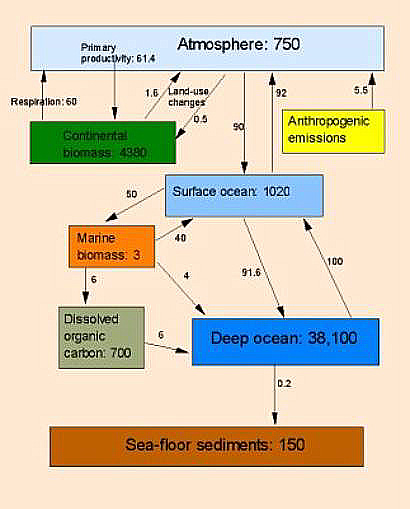 Reservoirs of carbon (in GtC) in the ocean (blue labels), in biomass in the sea and on land (tan and green labels), in the atmosphere (light blue label) and in anthropogenic emissions. Fluxes of Carbon between reservoirs are depicted by the arrows, the numbers represent GtC. (From: IPCC)

We’ve emitted 240 ppm of CO2, 120 ppm is in the atmosphere, 60 ppm-equivalents is in the ocean, and 60 ppm-equivalents on land. This Figure is using units of GtC and 400 ppm = 750 GtC. The land biomass reservoir is about 2000 ppm-eq and the deep ocean reservoir is about 20,000 ppm-eq. The increased CO2 stored in these reservoirs since 1750 is trivial compared with their size, so there isn’t an obvious reason why emission from the reservoirs should have increased already or will increase in the future.

In my main equation above, I should include a term for the increase in photosynthesis (primary productivity) with rising CO2. The incorporation of CO2 into organic material is the rate limiting step, so it could also have increased by a factor of 400/280 – at least in areas where water and other nutrients (N, P, K, and micronutrients) are not limiting.

CB comment:  No-one is suggesting that it is a good idea to keep CO2 emissions at current levels for centuries to come, but stabilising emissions now is a more realistic goal than reducing them to zero, and limits atmospheric CO2 levels. This gives more time to develop a far more rational future energy and transport policy.