There is a new animation by Ed Hawkins which shows a comparison of zonal mean temperatures with latitude, between observations and models. 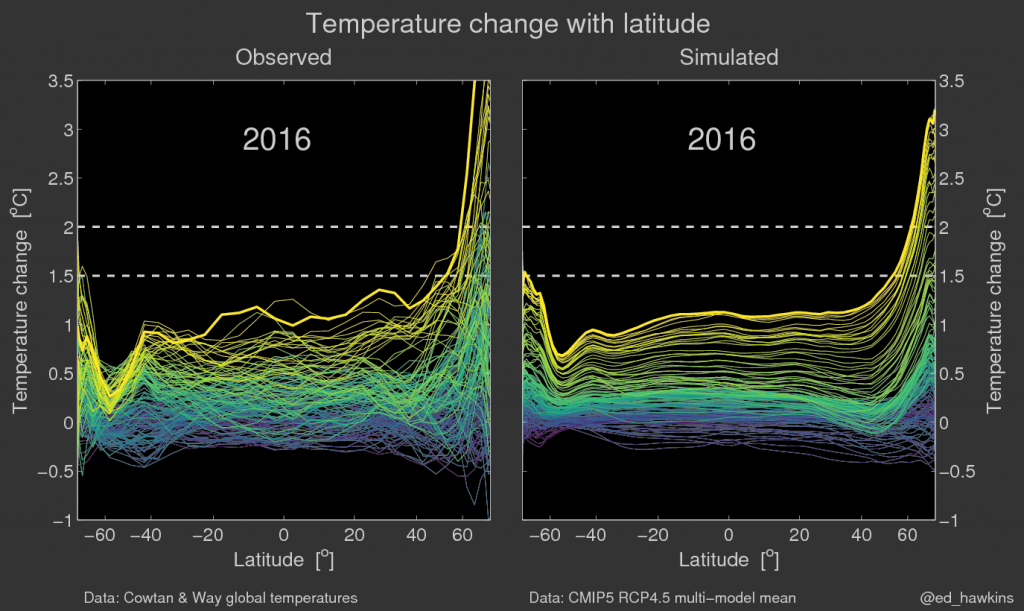 It is a very nice animation but it all looked a little bit too good to me, so I decided to check the result. So firstly here is  Cowtan and Way  plotted on the same scale. 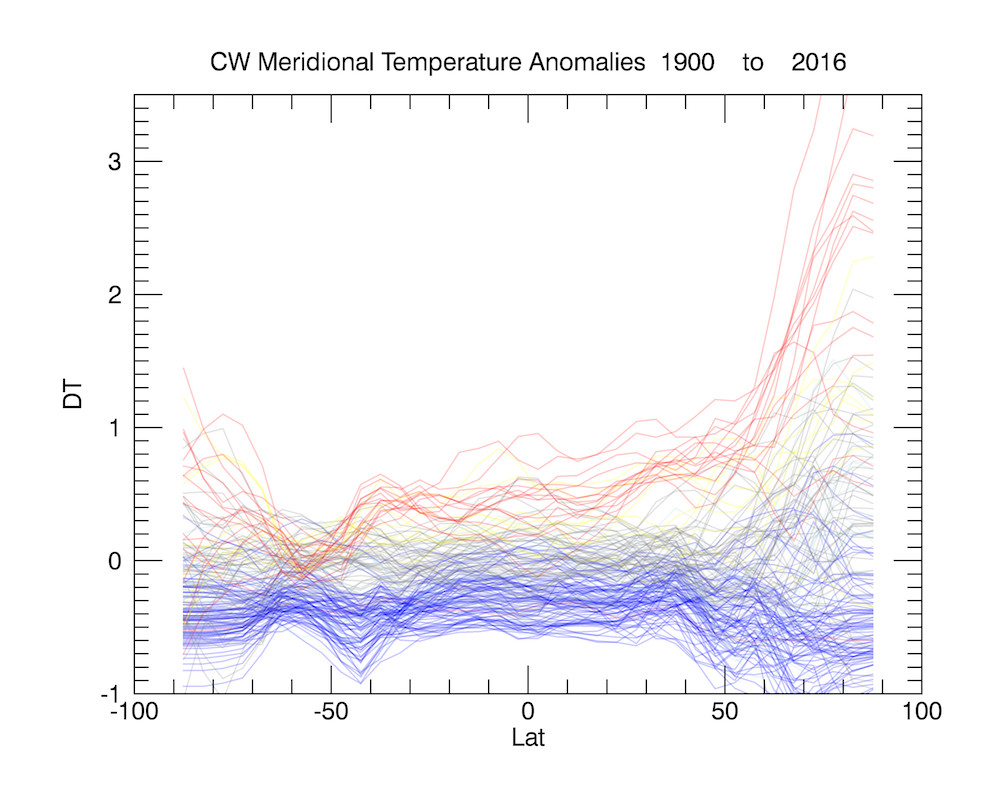 Cowtan and Way kigging extrapolation of Hadcrut4. The curves are coloured according to their annual global temperature anomaly.

The result is very similar but not quite the same. Several years fall below the scale, but none do on Ed’s plot. The 10th warmest Arctic year actually had a zero global temperature anomaly. The main problem I have with using Cowtan and Way is that their results are essentially smoothed. They  use satellite measurements to extrapolate Hadcrut4 into areas not covered by stations, but the satellite data is only available after 1980, so why are early years also so smooth? My guess is that they use a generic dependence based on their fit to satellite data also for earlier years. If true,  then I think it is unfair to label these observations as such. So lets instead look at the actual observations, Hadcrut4.5 itself. 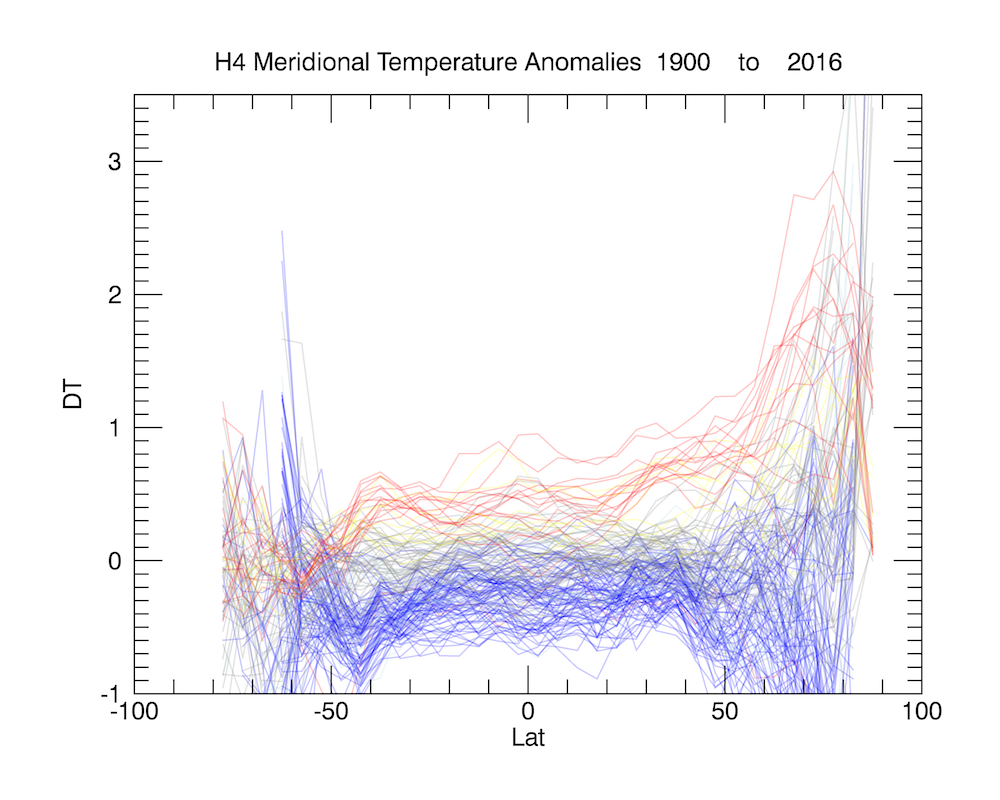 The overall trend is fairly similar but the data are now far more variable, especially at high latitudes. We also see the largest increases in the Arctic for years with average global temperature anomalies, and vice versa. If we expand the scale further we can see just how much variability there really is in the underlying data. 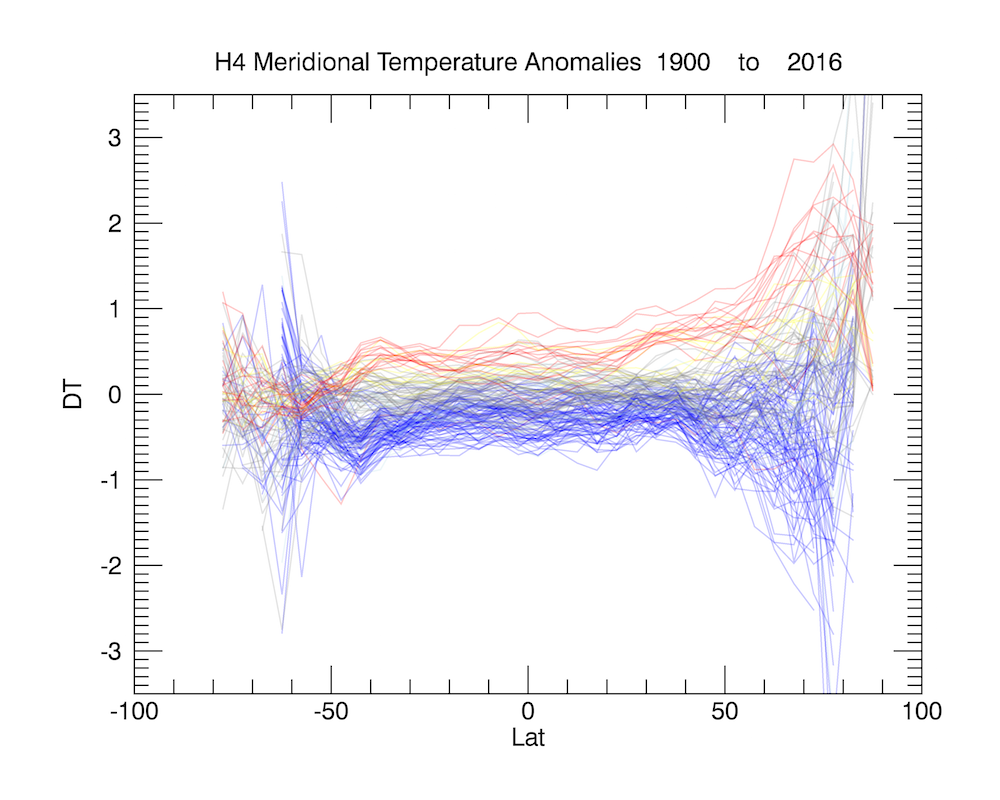 The conclusion is that Ed’s plot is basically correct, but he seems to have used a smoothed version of Cowtan and Way, which itself is a ‘kriged’ version of Hadcrut4.5 rather than using direct ‘observations’. If he used direct observations from Hadcrut4.5 then it would not look nearly so good.

The ‘simulated’ data is not the output of any actual climate model. Instead it is the average of all of them. Individually they disagree enormously about the amount of future warming. So the error on the 2100 simulated curves is really of the order of ±1C

Comparison of Hadcrut4.4 monthly data with an ensemble of 40 CMIP5 models