Why did the earth cool ~6C during the Pleistocene resulting in the current deep ~100 Ky glacial cycles? The most probable cause  is plate tectonics – the opening of the Atlantic and continuing rise of the Himalayas after India collided with Asia. Less well known though is the increasing height of the Andes, Greenland and Western US as shown below. All  this data are from the PaleoDEM project

Comparison of topgraphy 5My ago and Today.

an alternative view of the same data is though contour plots

Topographic contour plot. Coastlines drawn are the current ones

We can quantify the net change in land topography by calculating the surface area of the earth above a certain height. This shows that over the last 5 million years there has been an increase in land surfaces above 3000m altitude by about 5.4 million square km. That figure represents a net global increase of 56% in such high altitude land masses. This land movement is concentrated in the Himalayas, the Western coasts of America and especially Greenland. These last two areas extend into high latitudes where changes in albedo are important factors. So how might all this affect the global climate?

1. High altitudes are colder simply due to the fall in temperature with lapse rate. Above 3000m is something like 20C colder than at sea level.  Moisture falls as snow and glaciers develop.

2. A 50% increase in glaciated areas increases global albedo thereby reducing net incoming solar radiation slightly, which I estimate at about 0.5% or up to 2W/M2.  Perhaps just as important a result is that Milankovitch orbital forcing gets amplified as more land remains permanently glaciated at higher latitudes. This amplification effect is evident in the Ice Volume data. 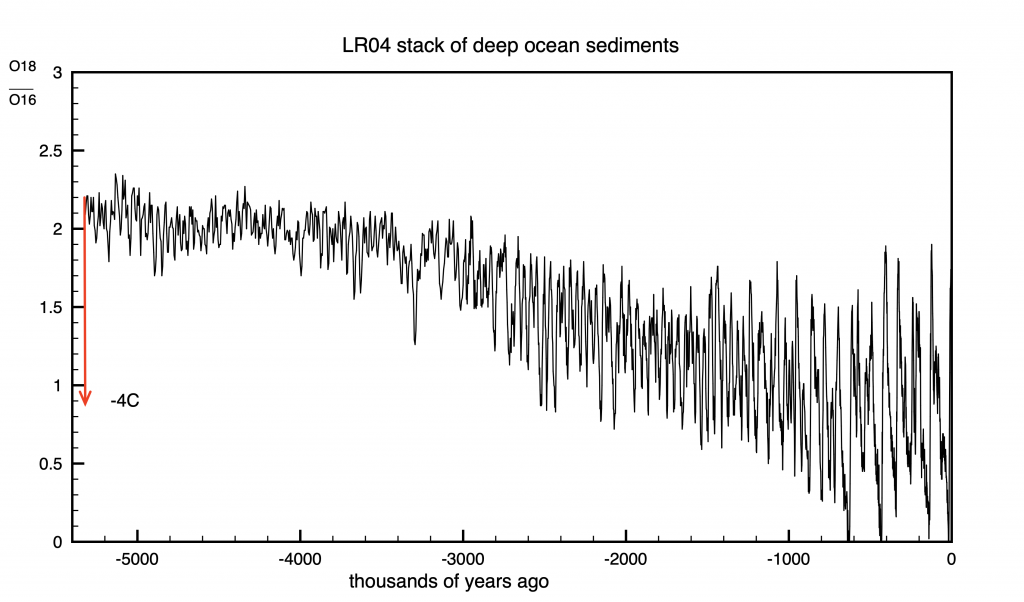 When did Antarctica become permanently ice covered? Prior to 2.5My ago the “West Antarctic Ice Sheet and Antarctic Peninsula Ice Sheets together grew successively larger, with periodic collapses during interglacials. During periods of West Antarctic Ice Sheet absence, the Antarctic Peninsula Ice Sheet remained as a series of island ice caps” (source). This might also explain why initially glacial cycles followed the obliquity cycle since NH insolation and SH insolation are out of phase. Changes in Ice volume partially cancel if Antarctica also contributes to sea levels due to land based melt-back. In this case the MPT (Mid Pleistocene Transition) may represent the end of this cancelation effect  and the start  of NH dominance.

4 Responses to 5 Million years of cooling