What SAGE got wrong

On March 16 Boris Johnson held his daily COVID briefing and for the first time introducing tentative social distancing measures. That same day Neil Ferguson had formally  published his simulation of how the UK epidemic would unfold and which suppression measures were needed – Household Quarantine, Place Closure, Case Isolation and Social Distancing (Report 9).  The paper must have been circulated within SAGE far earlier than that.  A full lockdown was finally introduced a week later on March 23. Unfortunately Fergusson’s  timing was about a  month out of date and the real situation was far worse than even he assumed. The real number of cases and rate of infection by March 16 in the UK was in reality far higher. However  no-one knew this at the time because there was no community wide testing amid what now appears to be an air of complacency by PHE.

We can now look back and compare what actually occurred with the original Report 9 simulations which I have rerun. This is shown in Figure 1. 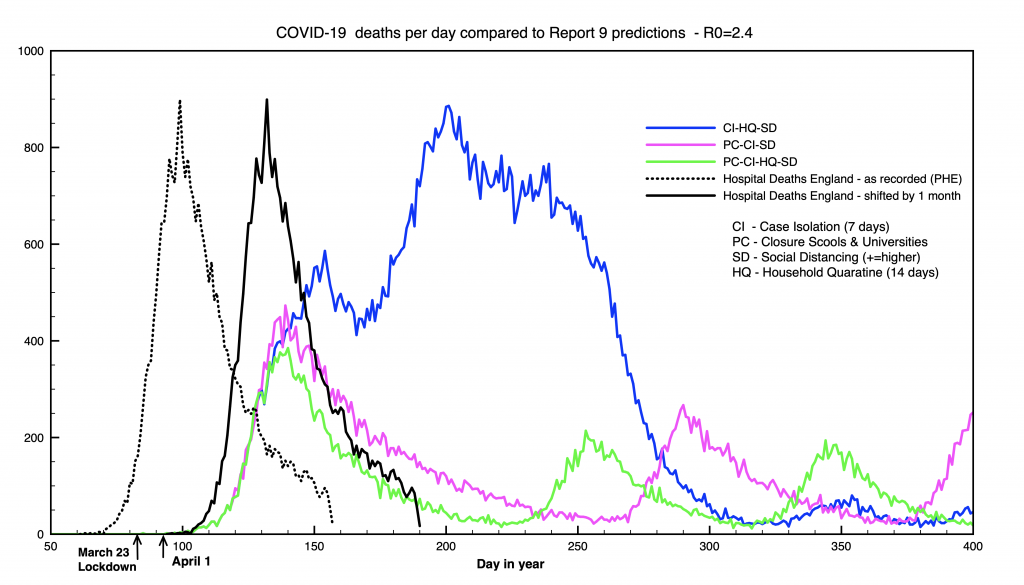 Figure 1. Neil Ferguson’s COVID simulation results (Report 9) as compared to actual COVID deaths as recorded in English Hospitals. The peak in English deaths occurred on April 10. This is compared to the Report9 green lockdown simulations and  a one month delay (solid black) of the model.

The peak in infections and deaths occurred one month earlier than he or anyone else had anticipated. Fergusson had predicted in report 9 that the peak would occur much later  around mid May. That was probably because he was using the Chinese data for R0 (2.4) and used an optimistic estimate of  the number of current UK infections. When the report was published there had been very few confirmed deaths.  However we now know there were probably  tens of thousands of infections. SAGE  now estimate that R0 in early March was 3 and that the number of infections was doubling every 3 days.

If the UK had locked down a week earlier the resultant number of deaths would have been much lower with at least 20,000 fewer deaths and we would be exiting lockdown by now (June 7). However at the time no-one knew the full extent of infection due to the total lack of community testing.

15 Responses to What SAGE got wrong