The news this morning is that the government is due to announce a nationwide lockdown on Monday because  deaths are even worse that foreseen in SAGE’s worst case scenario which was leaked 2 days ago. The Spectator on Thursday published the SAGE modelling group’s Reasonable Worst Case Scenario (RCWS). This also explains why Boris Johnson had been so cautious about opening up the economy. France, Germany and Italy have all announced new lockdown measures. Is all this actually justified?

Firstly the UK is actually doing better than the rest of Europe and cases are growing more slowly. They appear also to be levelling off under the current  regional “tier” system. 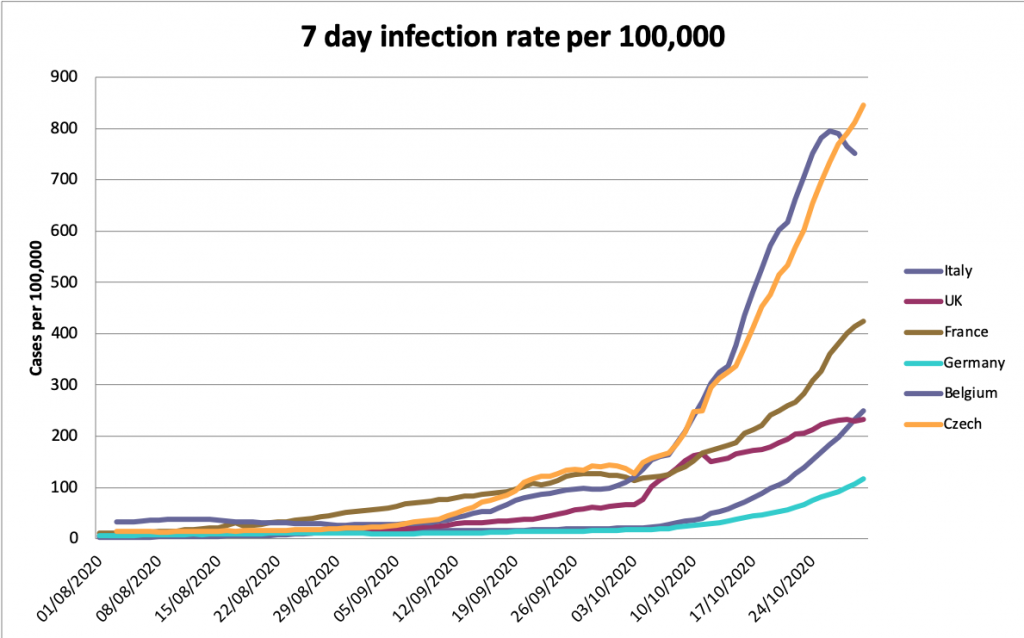 Just as the current measures seem to be working, Boris is under new pressure from SAGE for a new national lockdown because deaths currently exceed that foreseen by their modellers in their RWCS at the end of October.  Their scenario shows the second wave of Covid-19 starting this autumn with a long slow peak lasting until March causing up to 85,000 deaths and a surge in ICU beds . The first version of the RWCS report was published in July. No wonder Boris had been looking so glum and despondent. However, there is something very strange about their model.  I show below a comparison between their modelled cases with those that have actually been recorded so far (October 28). This shows that it is simply their timing that was wrong. 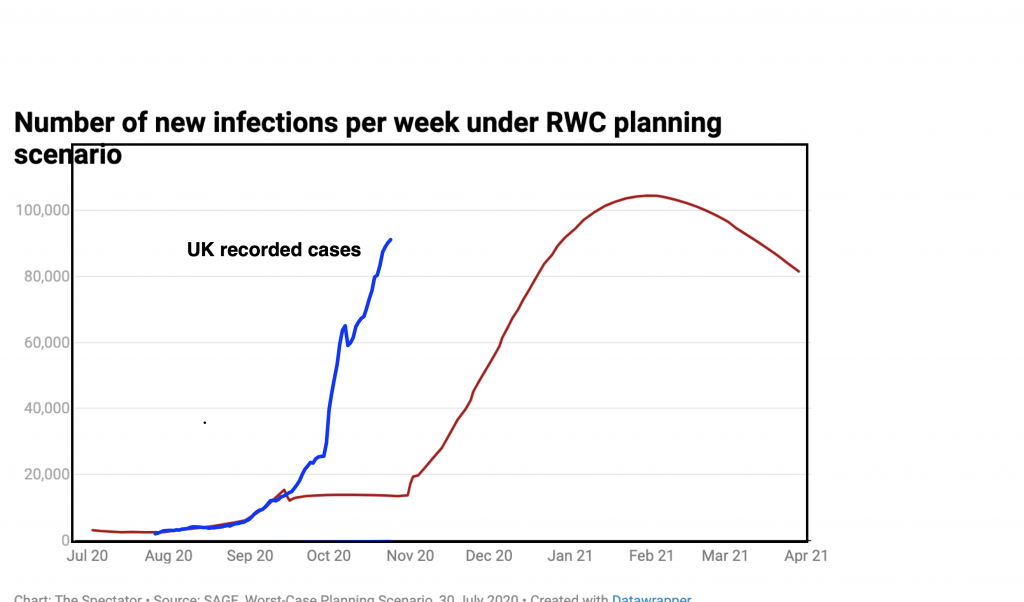 There is an artificial flat phase in their model lasting for about 6 weeks from October to early November. This implies that the modellers had assumed there would have to be a new lockdown period on 1 Oct followed by a relaxation and then a slow surge in cases. Epidemiological models are fairly straightforward unlike these curves . These models are concerned more about social interactions so the scientists are really trying to be more like social engineers testing measures to restrict contact rates.

Note how if we remove the 6 week flat period then the agreement is fairly good. Deaths and cases are ahead of the RWCS because there was no October lockdown. They also appear to be near the peak and the latest ONS infection survey implies that R is slowly reducing. The turnover point would be when the national value of R reaches 1.0. The fall matched to values of R < 1.

Therefore the current tier system is actually working quite well while maintaining economic activity. A full lockdown may well hasten this process but then at the price of causing irrevocable damage both to the economy and to non-covid health care. It may well be that the final death toll from delayed cancer and heart treatment exceeds that due to Covid-19 itself. Boris should therefore wait another week because the current measures may well be enough. New cases are levelling off. Covid deaths today reflect the situation as it was ~3 weeks ago.