Road map to unlock the UK

The government’s roadmap to end lockdown is all  based on the modelling from Imperial College. Here we show why their report is too pessimistic and that lockdown can probably  be ended safely sooner.

Current levels of transmissibility are based on our latest estimates for England at Reff (including immunity) =0.75 (translating to Rexcl_immunity =1.10 with an estimated 32% of the population currently protected via prior infection- and/or vaccine-induced immunity).

They are saying that without any vaccination R would be 1.1 even under the current strict lockdown and cases would still be increasing. Presumably this is because they think the Kent strain is now dominant in the UK (with a natural R0 = 3 to 4). They are assuming that as of 22nd February 21 million people are now “immune” from either vaccination  or from a previous infection. However their immunity is not 100% so to compensate for that they apply an efficacy factor for each vaccine (Pfizer, AZ)  and an age dependent “uptake factor” to account for those who refuse to be vaccinated. 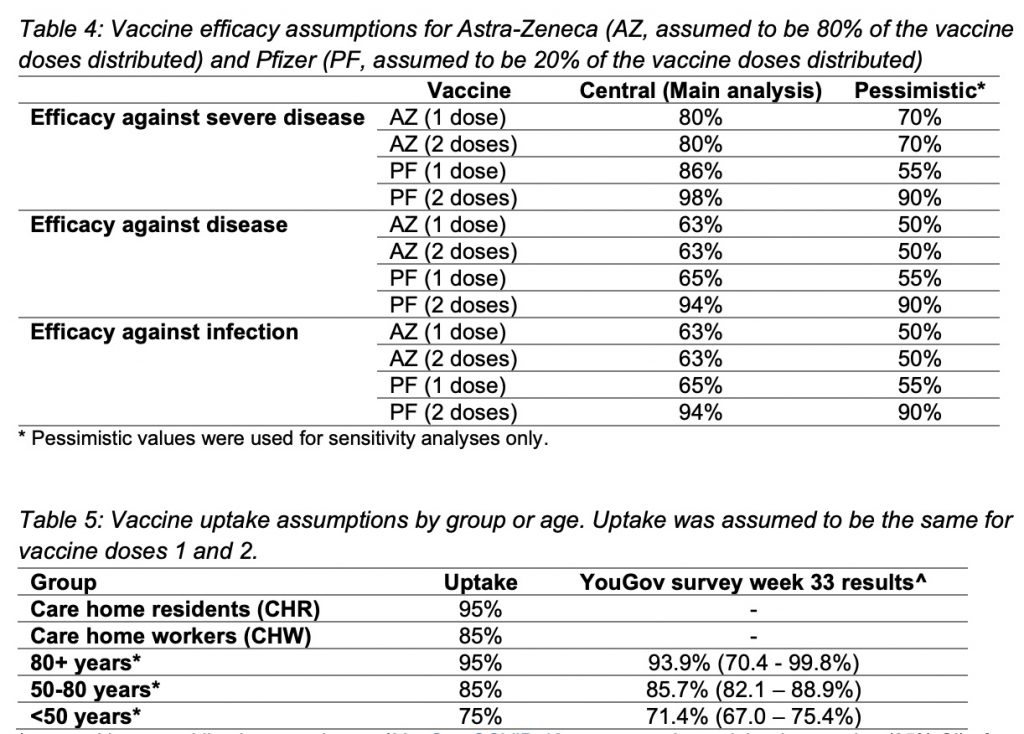 The modelling always works in the standard R (no immunity) and then applies the vaccine effect to deduce the number of cases at each step in the proposed un-lockdown process. So this means they are not directly modelling the vaccination itself but are simply applying a correction factor to deduce what the actual  value – Reff actually is.

So for Astra Zeneka (AZ) their factor for protection against hospitalisation (severe disease) for over 50s  is ~ 0.8 * 0.85 = 0.68 and for the over 80s is 76%. This implies that vaccination only protects 68% of the over 50s! They assume deaths are also only reduced by 68%.  However, real life data tells another story. The recent Scottish survey found that 28 days after the first dose of AZ hospitalisations of the over 80s were reduced by 94%! This is a staggering difference. It means that we can probably simply reduce  all their figures by 20%.

Furthermore their calculations of Reff assumes that just 68% of the population are susceptible due to their low vaccine efficacy and hesitancy. This value evolves as  mass vaccination progresses but their low protection factor slows down its effect.  This is why unlocking the UK is so painfully slow.  However In about one weeks time all people over 65 will have been vaccinated (95%) with 94% effectiveness – 90% in all. This this would already  reduce the death rate by ~90% as shown by the Spectator tracker. 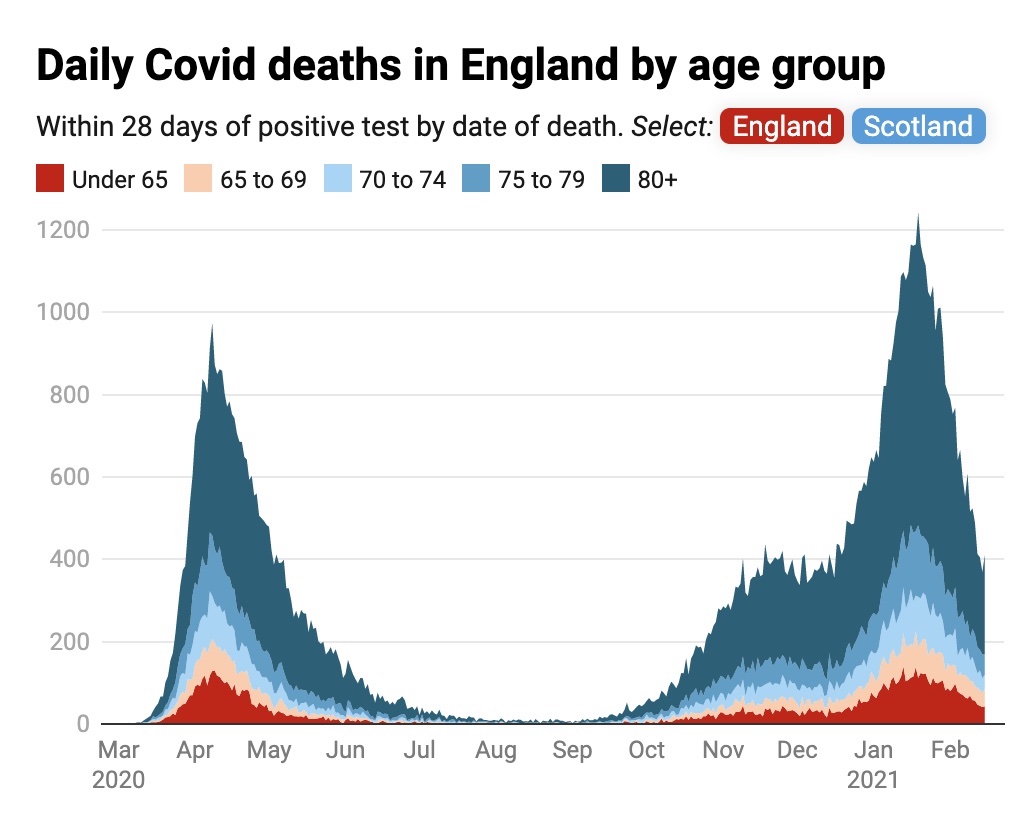 Their modelling is really rather crude. It is essentially just  “best” guesses

We assume that going from level 7 to level 6 (opening schools) will increase R_excl_immunity by an average +0.5 (+0.25 if opening only primary schools). This is based on the consensus value from SPI-M accounting for the increase in transmission due to the B.1.1.7 variant. The impact of switching from level 6 to 5 is difficult to quantify but is likely to be small, and we assume an increase of on average +0.1 in R_excl_immunity.

To model the average change of transmission between level 5, 3 and 2, we used the analysis by Laydon et al. (unpublished, previously presented at SPI-M) which estimated level 3 and 4 as having respectively 94% and 74% of the level of transmission of level 2.

We modelled level 4 as an intermediate between levels 3 and 5 (i.e. tier 2 and tier 3), with an average R_excl_immunity taken as the mean of the values used for levels 3 and 5.

Lastly, the final baseline transmissibility once all NPIs are lifted is assumed to be on average R_excl_immunity = 3, consistent with an increased in transmissibility due to B.1.1.7 but with a slightly lower level of transmission due to baseline NPIs. Due to the uncertainty in predicting the behaviour of individuals after the lifting of most of the restrictions, we also consider a baseline R_excl_immunity of 4 as a sensitivity analysis.

From late June until September there were very few cases in the UK. Boris Johnson removed nearly all restrictions in July and cases did not increase. The virus does not spread in Summer. This effect is even stronger in Italy which suffered worse at the beginning of the pandemic. Life returned to normal for July to September but cases did not rise. The outbreak seems to take off again once temperatures fall  in late summer/autumn. 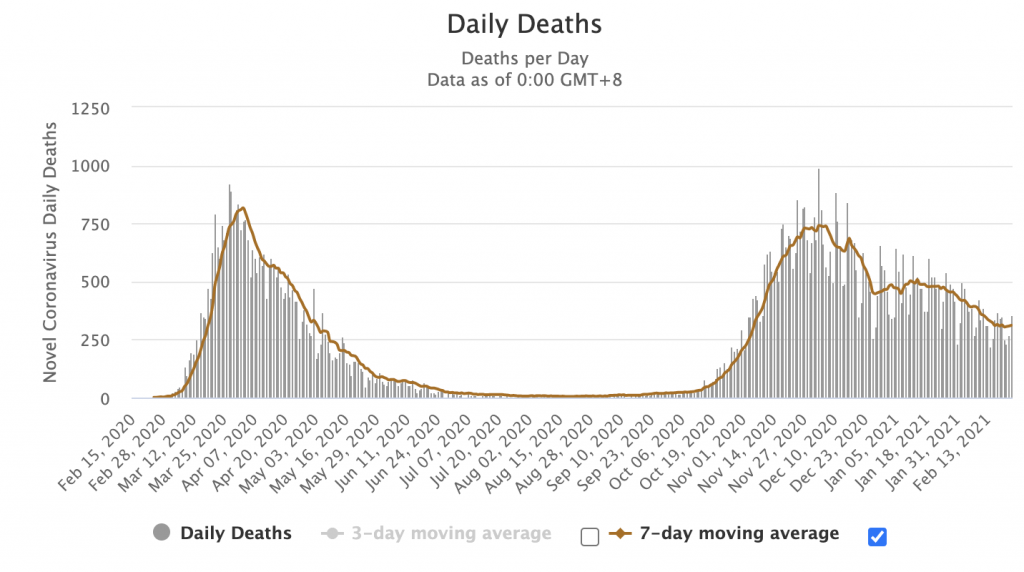 The conclusion is that there is a natural seasonality effect with Covid-19 suppressing spread of the virus during summer months. Yet the Imperial modellers almost completely ignore this effect. This is what they write.

In our main analyses we assumed no seasonality in SARS-CoV-2 transmissibility. We performed a sensitivity analysis where we assumed seasonal patterns of transmission throughout the year was 20% in the UK measured as the relative peak to trough variation.

A tiny 20% variation in R between January and August is incompatible with the data both in Italy and the UK. Both countries had children back to school, relaxed NPIs during the summer and their citizens went on holidays at home and abroad, yet cases did not rise. They only rose again as summer ended.  Kenya has a population similar to the UK but has only seen 1839 deaths in total compared to nearly 122,000 in the UK (1.5%), yet there are no NPIs in Kenya. Anyone who has ever been to Nairobi will confirm how just how lively and chaotic it is. The reason for this is obvious. Kenya lies on the Equator and COVID-19 doesn’t like high ambient temperatures! This summer cases will naturally drop again in the UK. So the Imperial team always seem to verge on  pessimism.

Boris Johnson has been forced by this report to accept a  cautious step by step plan with lockdown ending by June 21 at the earliest. Imperial’s cautious (gradual) proposed date was August 2, nicely timed to ruin everyone’s summer!

I suspect that all restrictions can safely end in early June once everyone at risk has been vaccinated. Will SAGE try to stop  it happening  though ?

3 Responses to Road map to unlock the UK