The installed capacity of  UK Wind farms is currently 25GW.  The business secretary Kwasi Kwarteng proposes to at least double that number, but there is a basic problem which seemingly everyone overlooks – Wind Lulls. Sometimes high pressure sits over northern Europe for many days on end bringing still air with no wind.  All UK, German and French wind turbines are becalmed producing little if any power. Life and essential services has to continue so old coal stations are fired up and CC Gas  stations run at maximum output to meet peak demand.

Comparison of Gas and Wind output during the 7 day Wind Lull last December.

We also see below how coal is still needed to balance power on the grid.

2.The recent  10 day wind lull lasting 10 days. At least this time there was a bit of sunshine yet notice again how the remaining 2 coal power stations were also needed . The whole of March saw only two brief spells of good wind output. 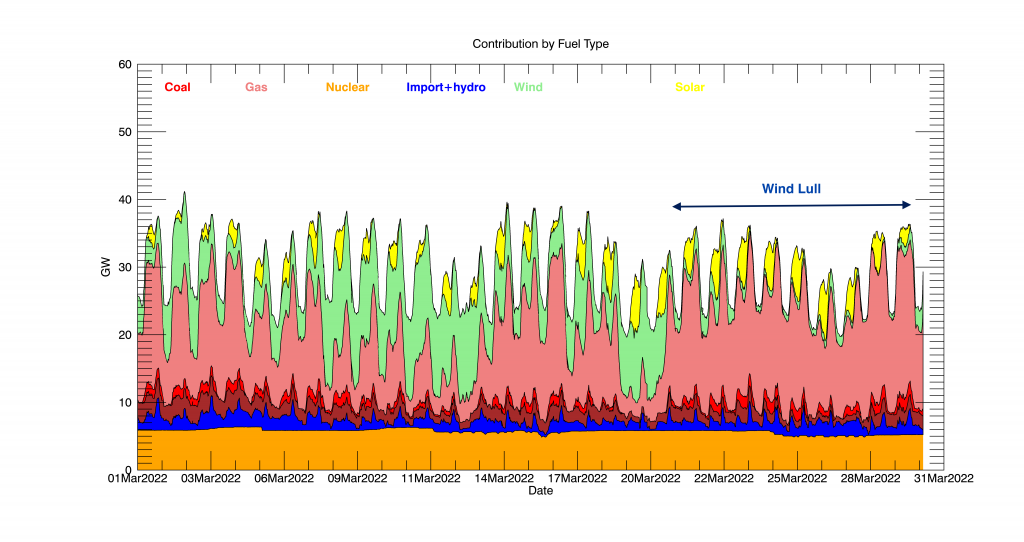 Most of March saw light winds. Output reached a maximum of 15GW briefly or a maximum  load capacity of  60% . Note that I am also correcting the metered wind output to include embedded  small wind farms as well.

Don’t worry though we are told. We just need “energy storage”, but no-one ever calculates just how much energy we would need store in order to see us through a wind drought like we have just experienced or the one last December.

In December there was additionally no solar power generated. In fact solar energy is perversely anti-correlated to demand. Annual peak demand is around 6pm on winter evenings when solar energy output is zero. So let’s estimate how much energy would need to be stored to cover the December lull.

We need 7 days of continuous power delivery at an average load of  30GW. So we need to store:

So it is unlikely that any future fleet of electric cars can back up the grid, assuming their owners would agree to walk rather than drive during a wind lull.

The largest energy store in the UK is the Dinorwig pumped storage Power Station in Snowdonia. It took 10 years to construct but actually paid for itself within 2 years by balancing peak time loads.  It can store up to 9.1 GWh of energy which is a useful power source over short periods.  However it is still  500 times too small to balance a wind dominated energy grid for a week. Nor do we have enough mountains to dramatically increase such pumped storage systems.

The largest Tesla grid size battery storage is in Hornsdale Southern Australia. It can store 193 MWh which is useful to cover short outages but still way too small for a wind lull.

As David MacKay used to say “We need an Energy Policy which adds up”.